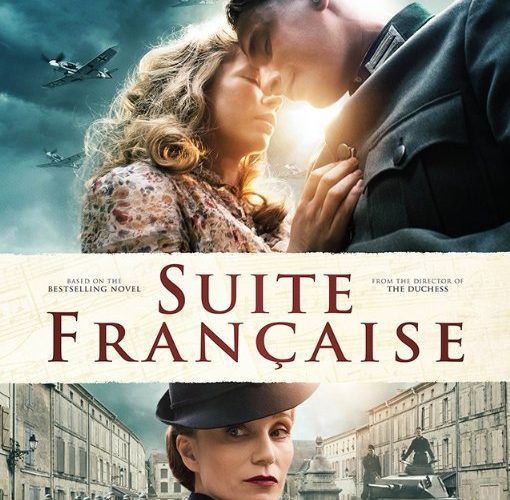 There are other things to do with my day, but I must write this review of Suite Française before the film completely vanishes from my mind. Although this France-set, World War II-era romance is not without pleasures both fleeting and consistent there’s little indication that this story requires a telling, or at least a telling by people with such didactic inclinations. “Watching Michelle Williams and Matthias Schoenaerts romance one another” is a better reason than most others to make a film, so this one would (naturally) have been a lot stronger if that was the central intention.

For whatever it’s worth, this is a work in which well-dressed people walk around well-dressed rooms, and the visual pleasure of that does not go unnoticed. Nor does the early, elegant establishment of stakes: Suite Française starts off free non-battle conflict, introducing us to Lucille (Williams) and Madame Angellier (Kristin Scott Thomas), a daughter-and-mother-in-law pairing who collect rent around a French countryside where, for some reason, everyone speaks English with a vaguely British accent. The Nazi specter — or at least a sense of large, looming danger — floats over these moments, working their way into the micro conflicts of individual scenes, until being brought front and center in a bravado bit of fireworks: a long procession of extras, an open field, and German fighter planes meet in one of the film’s standout sequences, one hampered only by spotty CGI in place of exploding bombs. (To the production’s credit, a few natural explosions work their way in, creating a sense of danger for characters we have no reason to expect see go.)

So, yes, here we are: the Nazi occupation of France as seen from the start of their takeover, complete with soldiers taking shelter in the homes of normal civilians. It’s immediately clear that Schoenaerts’ Commander Bruno von Falk is attracted to Lucille, establishing the question of whether or not that will be reciprocated as the drama’s point of focus. A told as old as time, admittedly, though both the material – scripted by director Saul Dibb and Matt Charman, based on Irène Némirovsky’s novel — and Williams play the ambivalence cleanly. On a conceptual level, Française‘s greatest strength is its willingness to muddy lines between nationalistic duty and sexual desire, which is to say: given the circumstances, a missing husband included, you can certainly understand why this doesn’t immediately launch.

Had the film been primarily centered on that — had we been given about twice as much time to watch them and pretty much only them work through the steps of this flowering affection — Suite Française might not be a great work, but it would possess something of great value. And what may have worked on the page as an interconnected vision of a particular point in World War II — a small-scale conflict that allows the many relationships between sides to complicate matters deeply — is a bit discombobulated when fitting in subplots about compatriots threatened by the enemy forces. How this connects to Bruno and Lucille is, given the intimacy of its location, convenient enough, if not dramatically tenable. After enough time with people whose struggles feel more scripted and less open to possibilities of the movie’s performers and atmosphere, cutting back to the star-crossed lovers falling deeper and deeper into each other’s arms is a constant reminder of when, why, and how this movie can work.

It’s no mistake that the one genuinely great scene is their consummation, a moment that mixes the clumsy and passionate expression of desire through a combination of setting, circumstance, performance, photography, and sound design. If this proves anything, it’s that an intelligence and craft was at the helm, and so this (and the scattered moments like it) evince, sadly, a better film that could have broken out of the set-up

What we instead get is a collection of scenes connected by some need to tell a historically resonant story — but who even cares about story? Why not let the peculiar situation of its protagonists completely take over? Why not let the atmosphere do its own telling? Why not take the risk of letting everything surrender to emotion? That’s the stuff of brave screen romances. This doesn’t even come close.

Suite Française played at the Camerimage International Film Festival and will be released in the U.S. by The Weinstein Company.