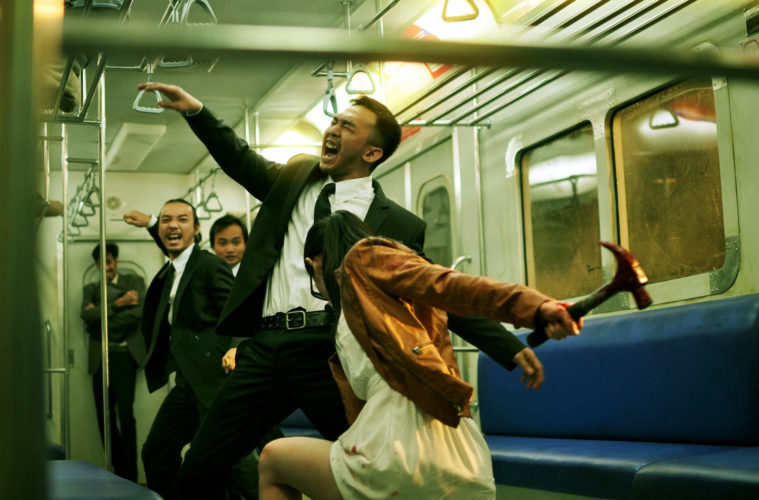 After highlighting a behind-the-scenes look at how The Raid 2 crew pulled off its most impressive action scene, we now have a new preview of footage thanks to an online-only trailer and a NSFW clip. The former delivers a barrage of action sequences (including a quote from our own review) from Gareth Edwards‘ latest, while the latter sees Hammer Girl beginning to assault a number of passengers on the local train as blood reigns down.

We were fans of the film at Sundance, saying in our review, “In no ways perfect and sporting violence that is sure to be overwhelming for some, The Raid  2 accomplishes what it sets out to accomplish: a visceral assault on the senses. There is an intrinsic beauty to the rhythm and flow of the camera movement, quick editing and lightning-quick fight choreography that result in unparalleled frenetic brutality.” Arriving one week from today, check out both the trailer and clip below. Following immediately after the events of THE RAID, RAMA (Iko Uwais) is forced to reinvent himself as an undercover cop in order to provide protection for his wife and child. Working for the anti-corruption taskforce led by the one person he can trust, BUNAWAR, he is given a mission to engage himself as an enforcer for a local mob boss, BANGUN. Finding a way in through BANGUN’s son UCO, RAMA must hunt for information linking BANGUN with police force corruption. All the while, he harbors a dangerous and personal vendetta for revenge and justice that threatens to consume him- and bring both this mission and the organized crime syndicates crashing down.