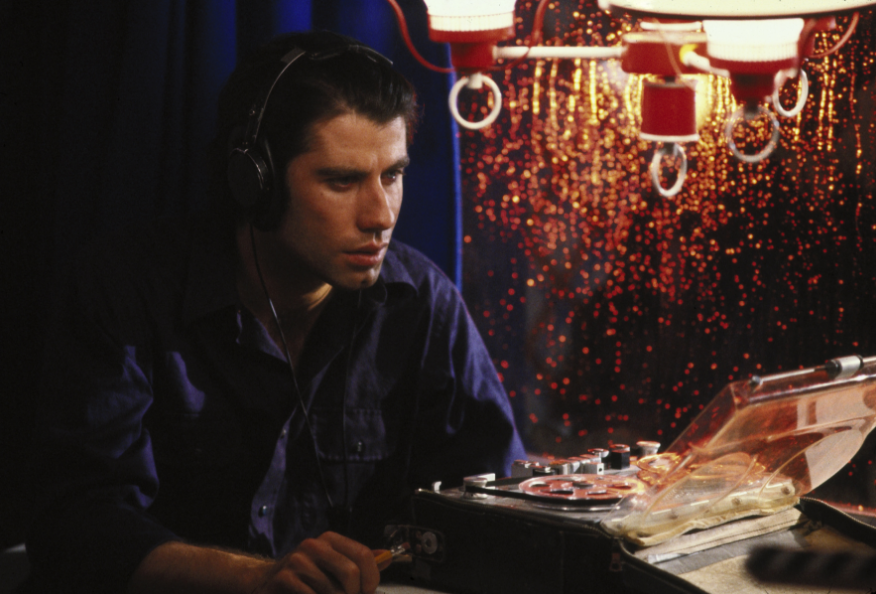 In a career fixated on the machinations of filmmaking presented through both a carnal and political eye, Brian De Palma’s fascinations converged idyllically with Blow Out. In his ode to the conceit of Blow Up––Michelangelo Antonioni’s deeply influential English-language debut, released 15 years prior––as well as the aural intrigue of Francis Ford Coppola’s The Conversation, De Palma constructs a conspiracy thriller as euphorically entertaining as it is devastatingly bleak.

In a fake-out opening––shot by Steadicam inventor Garrett Brown––that combines the voyeurism, nudity, and threat of murder that are De Palma’s calling cards, we see Coed Frenzy, the fifth movie in two years that sound technician Jack Terry (John Travolta) has done for the shlock director employing him. By showing the artifice of the B-movie, this film-in-a-film positions Blow Out as a more mature offering from the filmmaker, explicitly foreshadowed during the split-screen opening credits in which the drama’s political underpinnings are presented next to its infatuation with filmmaking. Even Jack’s sound company, Personal Effects––the film’s original title––is slyly located above a porno theater, an amusing encapsulation of Blow Out and De Palma’s career in general: the director may have a foundation for finding splendor in sleaze, but his aims for technical precision reign supreme.

Jack, who previously helped with police sting operations only to have a technical miscalculation lead to the death of an undercover officer, now finds himself in the rut of exploitation films. Sent out on a mission to find the perfect scream, he wields his weapon of choice––a shotgun microphone that’s shown protruding in shallow focus, akin to Michael Caine’s knife in Dressed to Kill––in a nearby Philadelphia park. While surveying the area, a tire “blow-out” is heard as a car careens into the body of water in front of him. The governor and potential presidential nominee who was driving drowns, but his escort (Nancy Allen) is saved by Jack, and a cover-up begins.

Through converging the visual aspect of Blow Up and aural focus of The Conversation, De Palma––always one to explore an idea to its ultimate escalation––delights in Jack’s primary mode of investigation being the literal act of filmmaking. Placing us in Jack’s mind––now with a newfound quest for the truth, reignited after guilt tied to his botched police work––with tight close-ups of his actions and meticulous sound design, we walk through his discovery of the gunshot as he syncs it up to the photos, and finally creating his own film. It could be “the biggest thing since the Zapruder film,” according to the slimy co-conspirator Manny Karp (Dennis Kranz), but Jack’s breathless determination to reveal the truth is denied by the police and government at every turn.

In a film constructed with immaculate technical precision, one of its most paralyzing sequences finds Vilmos Zsigmond’s camera taking six 360-degree turns around Jack’s sound studio, panning to the whir of his now-blank reels. His sense of paranoia increases as his grasp on reality reduces. After being immersed during the 360-degree pan, our vantage point shifts to above the character, tracking across his lost work and observing the ruinous results with one overwhelming blow. After being intrinsically tied to and defined by his use of technology, he’s now in chaotic shambles.

In her fourth and final collaboration with De Palma, Allen, inspired by Giulietta Masina’s performance in La Strada, plays Sally with a heartbroken desperation, elevating the usual thriller tropes of a supporting actress in the genre. “I sure as hell can’t type, so it doesn’t leave a hell of a lot,” she tells Jack when being accosted about her monetary motives. Used and abused by Manny, the equivalent of a pimp, her capitalistic view makes the uncompromising finale all the more damning: she’s a character forced into her way of life, manipulated by those around her and ultimately victimized for taking the moral route.

Constructing perhaps the most memorable, condemning finale of his career, De Palma employs slow motion to prolong the inevitable. Jack sprints through a celebration of America’s finest hour as reflections of red, white, and blue bounce across his face. Above, Burke (John Lithgow) strangles Sally to death with a suffocating vision of the flag in the background. Jack is too late to save Sally, but he makes it in time to stab Burke to death while blood as red as the flag extrudes from his body. Through attempting to avenge Sally, Jack has inadvertently covered up his last known threads of conspiracy. Replacing the sounds of fireworks––a boisterous signifier for America’s freedom––is Pino Donaggio’s score, once-bombastic and now reduced to simple chords of a soft piano as we witness a somber final embrace underneath an explosion of light. As our country’s past gets proudly venerated, blood spills and a corruption is covered up behind the public’s eye. It’s a cynical view for De Palma, but for a filmmaker who grew up in the era of Vietnam, Zapruder, Watergate, and Chappaquiddick, it couldn’t be more sincere in its bleakness.

The final scene finds a sweating, lifeless Jack, now in an antithetical state from the opening, sitting in the editing bay as the dying shrieks of Sally echo, and his director yelps, “Now that’s a scream!” As if in a comatose state, he reluctantly repeats, “It’s a good scream, It’s a good scream” as he attempts to drown out the noise. His failure to save her life is now imprinted onto a film forever, the guilt-ridden horrors reverberating through his consciousness. The girl is not rescued. The conspiracy has not been overturned. Our now-miserable hero returns to a purgatorial room piecing together shlock. A moment of tragic horror is now reduced to a sound bite in a prescient finale that only resonates more today.

Continue reading our career-spanning retrospective, The Summer of De Palma.