Black Christmas Review: An Inherently Sexist Genre Gets Reframed with its Own Cheap Thrills 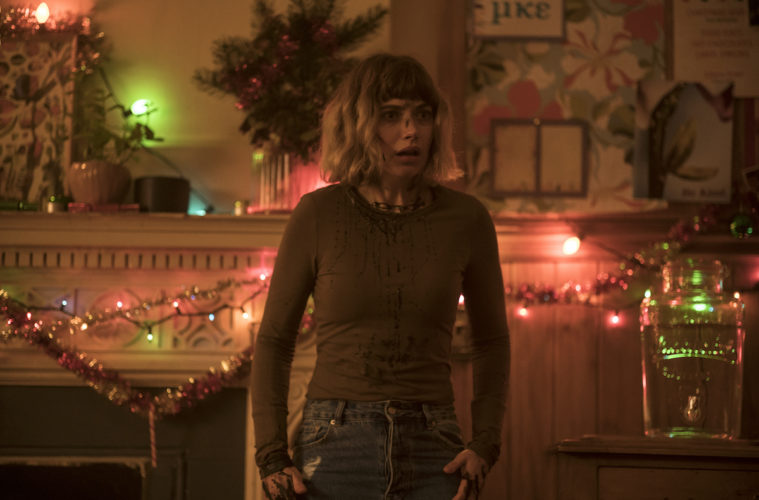 Sophia Takal’s reimagining of Black Christmas cuts past the male gaze, creating a send-up of the genre in the era of Time’s Up. A somewhat revolutionary film in concept by continuing to subvert expectations, this 2019 version flips various slasher film tropes and reframes sexist expectations of the “sexy co-ed slasher flick” for an era in which norms have radically changed. Unlike Get Out and other recent genre flicks that mix social commentary, unfortunately it never quite pulls everything off. Being woke, funny, and scary all at once is indeed a difficult feat to achieve, but at least Takal’s new take is more admirable than the standard slasher film as it has a different kind of sex and violence on the brain. Black Christmas places its agenda first and foremost and is the rare film where its characters actually talk like smart Ivy League students rather than paper-thin tropes. While the film opens with the standard PG-13 teaser stabbing with minimal gore, it truly begins when our heroine Riley Stone (Imogen Poots) encounters Dr. Gelson (Cary Elwes), a sleazy classics professor accused of both implicit and explicit misogyny. Riley, a sexual assault survivor, confronts her accuser who has returned to campus to oversee a talent show at the local frat house. Supported by her sisters, they perform a Christmas carol about the incident, after which Riley and her sisters become haunted by cryptic direct messages from the school’s founder Hawthorne, a man so evil and problematic we learn early on that he held slaves in the north.

While the ideas in the film are fascinating and well-articulated by their characters, the plot evolves into something needlessly contrived focusing on the power structure of the patriarch and the secret society that grows and grooms judges, CEOs, and power brokers in a lab-esque mentality. It’s fitting the film has a funny passing reference to one heterosexual white male who quotes Brett Kavanaugh’s most infamous confirmation moment verbatim. That, unfortunately, is as witty as the film gets. Taking serious material too seriously it lacks a certain irony that could exist in a state of extreme self-awareness. The point is of course that an entire genre was built on the pain and suffering of attractive young women, and Takal and co-writer April Wolfe turn the tables with a work that knows this, speaks of it, and never quite pushes the boundaries to a conclusion that doesn’t feel distractingly silly. A horror film populated by smart characters that take on the patriarchy by refusing to play by its rules, its anger and its heart is in the right place. The problem is how it achieves these ends with plot devices that feel borrowed from cheap studio cash grabs usually dumped in theaters in January and September. Perhaps it’s a feature of Black Christmas rather than a bug, but by the middle of its first act, the film has already lost those looking for cheap titillation. Why try to win them back with an abrupt and sloppily composed finale that attempts to placate audience members who were expecting a traditional PG-13 slasher flick?