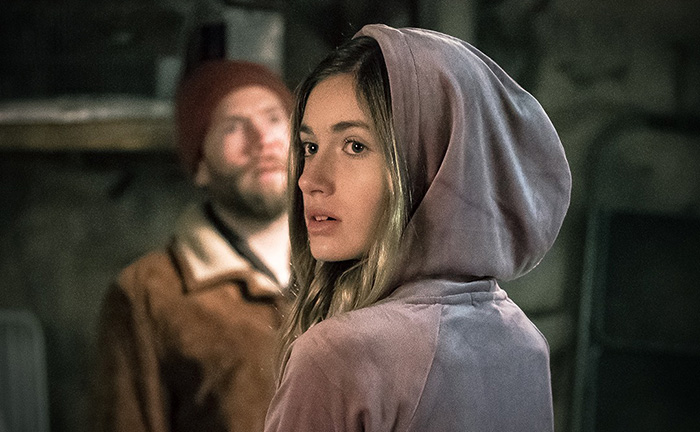 BIFF Review: ‘Clover’ is a Comedic Thriller of Survival

It wasn’t wise to borrow money from local mobster Tony Davolio (Chazz Palminteri), but brothers Mickey (Jon Abrahams) and Jackie (Mark Webber) didn’t have a choice. Running a bar isn’t easy these days and the added pressure of trying to keep one afloat after generations of family ownership forces their hands to make a deal with the Devil. After a shared history allows for a single extension on payment without increasing the vig, Jackie decides to gamble what they owe (recouped in full) the night before their deadline in hopes of easy profit. As Mickey (and many others) soon explains, however, thinking has never been that sibling’s strong suit. So how do we meet these two? Escorted empty-handed to Tony’s lair, their fate all but sealed. Screenwriter Michael Testone does give them one more out, though. If the brothers go with Tony’s son Joey (Michael Godere) to collect on a dead-beat who owes more than them, the slate will be wiped clean. He says they won’t have to shoot anyone, but we know better. Eventually their mark is tied to a chair in his own basement with Mickey and Jackie given an ultimatum. Kill him or die too. These guys may talk tough—when not engaged in loquaciously cyclical banter consisting of never-ending finger pointing and sarcastic jabs—but murder has definitely never crossed their minds. So when Joey’s gunshot reveals his victim’s daughter standing by the stairs, their instinct is to protect instead. And that’s when she puts a bullet in Joey’s head.

This is when Abrahams’ Clover (he also directs) comes into focus as the comedic thriller of survival it is since we aren’t sure whether this girl (Nicole Elizabeth Berger’s Clover) is a lucky charm or nightmare. It’s easy to blame their predicament on Jackie losing their money at cards—and Mickey enjoys relentlessly throwing that in his face—but any chance of talking their way out of matching coffins evaporates when she pulls that trigger. Tony now puts everyone at his disposal on their trail in the hopes of bringing them in alive so he can kill them with his own hands. And when their incompetence proves too much to ignore, he outsources to the best two contract killers he knows (Erika Christensen’s Gertie and Julia Jones’ Virginia). Mickey and Jackie are forced to cash-in any favors they can to stay low and keep their wits whether that means contacting people with the clout to take Tony on (Tichina Arnold’s Pat), ex-girlfriends (Jessica Szohr’s Angie), family friend cops (Johnny Messner’s Stevie), or clinically insane cousins (Jake Weber’s Terry). While some are ready to die for them, however, others certainly are not. When you factor in the cash Tony is willing to pay to incentivize the latter, it’s a wonder anyone would. If not for thirteen-year old Clover stuck in the middle, they probably wouldn’t even need that money to say, “No.” So here we are with two idiots, an innocent kid, and an entire city with guns cocked and ready to blow them to kingdom come.

The rapport between Abrahams and Webber is humorous enough as it is, but credit Testone for writing Berger’s character as a distraction from the inherent monotony of that shtick. As Mickey vomits and Jackie screams, Clover is revealed as a nonplussed sociopath wondering aloud why they haven’t torched a car with the body of their dead friend to destroy fingerprints. The slack-jawed responses they give her when she uses a seemingly encyclopedic knowledge of true-crime television plots is hilarious; the juxtaposition of having her become their pragmatic protector a wonderful subversion of the tropes utilized. And our enjoyment of Clover’s demeanor only grows when paired with a paranoid Terry who loves the opportunity to share his collection of homegrown lethal substances dubbed “my children” with a kindred spirit. As Abrahams stated during a post-screening Q&A, his and Webber’s characters are like Rosencrantz and Guildenstern—hapless rubes led around without the wherewithal necessary to discern their place in the bigger picture. This is how used to being victims of horrible luck they are and how easily they allow themselves to become their own worst enemies. What’s bad for them is great for us, though, as their inability to dig themselves out of this trouble ratchets up the suspense with an ever-growing body count they simply don’t have time to mourn. Things get dark quick with bloody murders and effective cat and mouse chases (Buffalo’s old Central Terminal is a great venue for this) to keep everyone on his/her toes while the final confrontation grows near.

Besides the decision to use rape as an out-of-the-blue character motivator as though that trauma can be casually introduced without trivializing its impact, most other faults are superficial. Clover is populated with bad guys for its unwitting trio to confront, hide from, or recruit while circumstances escalate uncontrollably and it leans into that simple conceit. Things do get extra silly by the end, but the blackly comedic tone is consistent enough to allow for such a wild turn of events to feel at home nonetheless. And with a lot of funny asides by periphery players (Jake Weber steals the show and conversations like Christensen and Jones talking about opening a pizza restaurant while staking out targets stick in the memory), there’s little time when we’re not fully entertained.