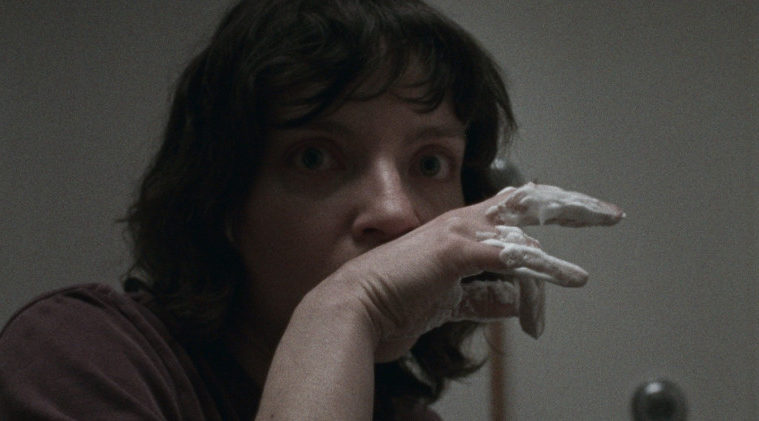 Simon died, or perhaps he killed himself. His car raced through a wintry country road, span, crashed. None of the 215 inhabitants of his native Quebecois hamlet of Irénée-les-Neiges would dare to call it a suicide, not even his older brother Jimmy, mother Gisèle, and father Romuald. But the boy’s death was no isolated case. “We lost him in a battle, but we haven’t lost the war,” Irénée’s mayor Simone Smallwood addresses the townspeople at the vigil, where the battle she hints at rekindles the lad’s death to the several suicides the remote town has suffered through the decades. The war, in turn, speaks to something far larger: a small community’s struggle against an outer urban world that concurrently poaches its residents, and pushes those who remain deeper into oblivion.

Denis Côté’s perturbing Ghost Town Anthology pivots on this conflict. It is a haunting portrait of a tightly-knit village resisting the fate the title alludes to–a self-sufficient microcosm that’s been fighting the allure of the big city life and now watches as a new intramural tragedy threatens to break the order of things, once and for all. At its most compassionate, it exudes the sort of nostalgia of a farewell letter to an untimely place and its unhinged eccentrics, penned with an endearing eye for all their faults and idiosyncrasies. At its most perturbing, it stirs up a mysteriousness à la Twin Peaks–the uneasiness that billows when the boundary between the real and the supernatural becomes uncomfortably blurred.

For Irénée-les-Neiges is haunted. Simon’s death may be the last in a long series of acts of self-immolation, but the tragedy, in the words of a concerned old-time resident, turns everything upside down. Incapable of processing grief, the lad’s family shatters: Gisèle (Josée Deschênes) roams the desolate town looking for reasons behind her son’s accident; Romuald (Jean-Michel Anctil) leaves a note and drives into the white immensity surrounding the village, unsure as to whether he’ll ever return; while Jimmy (Robert Naylor) revisits his brother’s favorite hangouts, waiting for him to show signs of life.

Until something otherworldly happens, and the remote village wakes up to the sight of its deceased residents. Men, women, and children perished years and decades prior suddenly pop out of nowhere, roaming the empty, snow-covered streets and staring at the living–without ever effectively interacting with them. The glacial-eyed Simon (Philippe Charette) is among them, but as Ghost Town Anthology passes this pivotal juncture, Côté scales up his focus, and the grief of Simon’s family becomes somewhat secondary to the question affecting the community at large: what to do with the unexpected visitors?

From here on, Ghost Town Anthology becomes a disquieting excursion into otherness–a foray into the ways an endangered community reacts to an alien presence–however alien the sight of the town’s former villagers may be to those who outlived them. But Côté’s elliptical script–adapted from Laurence Olivier’s 2015 novel of the same name–adds another layer to the conundrum, and this is where things get particularly interesting. Irénée-les-Neiges, the village called forth to reckon with this “otherness,” has itself historically been cast as “other” by a metropolitan core that doesn’t quite seem to understand why people would still want to live at its periphery. When the news of Simon’s death spread outside the village, a psychologist (Sharon Ibgui) is sent in from Montreal to assist Mayor Smallwood (Diane Lavallée). In a tense exchange between the two, the mayor gets incensed at the word the psychologist uses to describe Quebec’s peripheral villages–outside. It’s a patronizing metonymy upon which Irénée-les-Neiges has been forced to construct and internalized its own identity–as a marginal, abandoned, forsaken place that’s been emptied out ever since it came into being.

Still, Côté leaves no room for any inter-outcast liaisons. There is no such thing as an alliance of all Irénée folks (dead or alive) against the metropolitan world that’s been claiming their lives. The community reacts to the phantom menace with sheer horror, anger, and eventually, indifference. Ghost Town Anthology is not a ghost story like David Lowery’s, dotted with white draped phantoms, or like Olivier Assayas’ Personal Shopper, with its ectoplasms conjuring up inside derelict buildings. The ghosts populating Irénée-les-Neiges may not talk once, but they look disturbingly real, almost tangible. There is nothing particularly gory about their presence, and the few jump scares that pepper the encounters between the living and the dead are the result of some carefully studied shot-reverse-shots, and a few particularly inspired performances, Lavallée as the protective Mayor Smallwood and Larissa Corriveau as the deranged town resident Adèle–one of the first to witness the eerie presences – standing out among the rest. But the ghosts never seem to threaten the living. After a while, they’re downgraded to a disturbance, a thing to just get on with. “Try to live your lives as usual,” a government official suggests a dumbfounded townhall. It’s a wry crack nobody finds particularly amusing.

For Simon’s death did not just shock the community for the victim’s young age. In a 215-strong village, one death is one step closer to complete annihilation. And Ghost Town Anthology understands this all too well. The anger Mayor Smallwood channels as she first confronts the ghosts belies deep-seated fears for what the spooky presences truly are–silent reminders that little hamlet is turning into, if it hasn’t become one already–a ghost town in the most literal sense of the term. Shot with a handheld camera on a washed-out 16 mm by François Messier-Rheault, Ghost Town Anthology percolates with the sadness of a place bracing for its untimely death–a landscape populated by psychically damaged wanderers, fumbling after an identity within and beyond the town that wouldn’t exist without them, and vice versa.