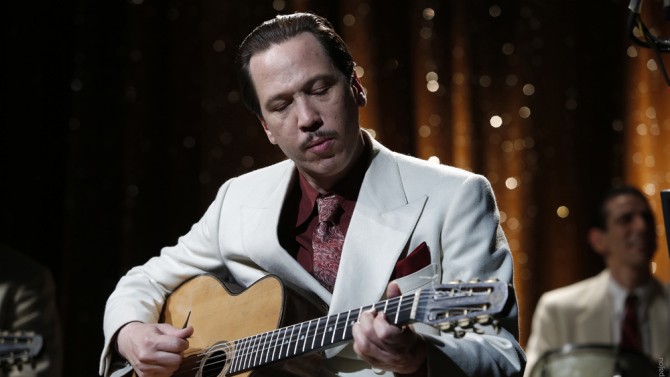 Berlin Review: ‘Django’ Searches for a Rhythm Between Music and War

It appears there’s been a conscious effort to de-glamorise this year’s Berlin film festival, rid of the star wattage that recent opening-night films have brought (The Grand Budapest Hotel and last year’s Hail, Caesar! to name two). Instead, in light of the unremitting dread that seems to now pervade Western politics, program director Dieter Kosslick has chosen Django, a relatively low-key biopic of jazz artist Django Reinhart set in World War II to start proceedings. It’s a curious choice, but this drama about an artist who – at first – ignores the rise of far-right fascism in Europe (“who I play to is of no concern” Reinhardt argues) proves, by its close, an effective warning of the troubles of collaborationists and appeasers to society’s malignant forces. While it’s narratively unadventurous and its characters are undeveloped, this debut by French director Étienne Comar does have the ring of prescience, and is all the better for it.

Reda Kateb, an actor best known for bit parts in Zero Dark Thirty and 2014’s gripping Far From Men, is given his meatiest role to date as one of jazz’s foremost artists. Reinhardt, born in Belgium to Romani stock (rather un-PC referred to as “gypsy” in the distributor’s literature) in 1910, played to packed houses in Paris, his renown growing to such an extent that he played to the Nazis during the city’s occupation in the second World War, despite jazz’s reputation as degenerate “monkey music” to the Germans.

We first get a glimpse of Reinhardt as the camera curves from behind in a tempestuous seven-minute sequence at a Parisian concert in 1943: “No dancing” shouts a Nazi-approved poster on the wall, but Reinhardt’s extraordinary playing style – so-called “hot jazz” – gets people on their feet. “You charm snakes,” says Reinhardt’s lover, Louise (Cécile de France, underused), noting how he can even bring Germans to their feet in Paris’s concert halls. Kateb spent a year learning to play guitar in Reinhardt’s unique style – the guitarist lost the use of two fingers after a fire as a teenager – and his performance gives a flavor of the musician’s eagerness to please, and a frissance that suggests something deeper burning inside. While Kateb is certainly playing on camera (believably, it must be said), it’s a tad disappointing to learn the music is actually overdubbed by jazz troupe The Rosenberg Trio.

Little is known of Reinhardt’s actions during the war, and this fictional tale, based 2013 novel Folles de Django by Alexis Salatko, takes a decent stab at accentuating the rhythm of Reinhardt’s movements towards the end of the conflict. At the time, millions of Romani in Europe were being rounded up and sent to camps by Nazis, but Reinhardt’s fans in the Nazi elite (including, reportedly, Goebbels) keep him protected, and a lucrative deal to play in Germany beckons. Indeed, his mother (Romani Bimbam Merstein, sparkling) speaks for his Romani brothers who believe the war to be an affair for outsiders (gadjos to Romani), not for those like themselves who proudly have no home and no borders. But Django is advised to flee, as those in the know (including resistance agent Louise) say that he wouldn’t return from Germany if he went.

This is when the film begins to shift into gear. Reinhardt at first believes that his music allows his fans to escape the war’s brutality, insulated as he is himself from its effects by his success and fame. But when he’s persuaded to escape to Switzerland alongside his mother and pregnant wife (Bea Palya), the desperate circumstances of his Romani brethren, who reside near the border hoping to make it across the mountains, take hold (at Lake Geneva “bodies wash up on the shores every day”, he’s informed). A Von Trapp family-style getaway during a gig for the Nazis seems to be their best bet at freedom.

While Kateb is a fine presence, Colmar (a co-writer of the far superior Of Gods and Men) directs with none of his protagonist’s thrilling pizazz, and his and Salatko’s script plods without any of jazz’s syncopated rhythms. Kateb himself is given little chance to show onscreen Django’s internal dilemmas; it is not enough to exemplify Django’s predicament by making him stare longingly at the Swiss Alps.

But as a film a that explores how no artist can insulate themselves from politics or the iniquities of the world, it is much more persuasive, and I found myself mulling over how musicians, artists, and filmmakers of today should be interpreting and reacting to our stormy political environment.

Django premiered at Berlin Film Festival and opens on January 5.