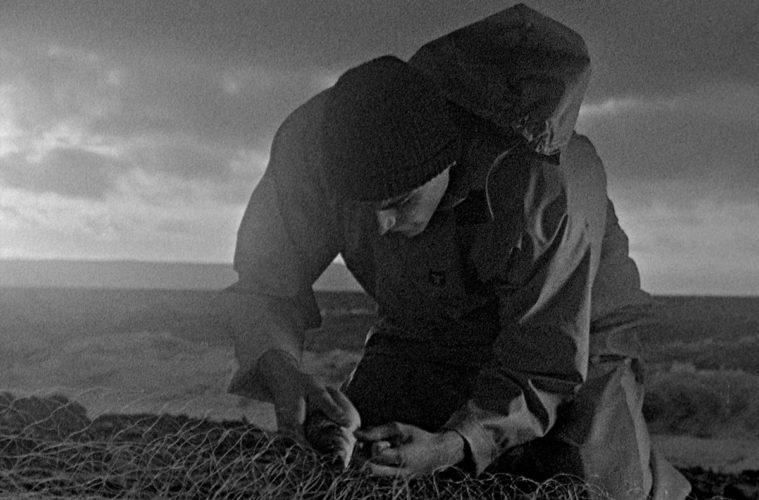 Berlin Review: ‘Bait’ is a Punky, Poignant, and Profound Allegory About Fishing

For his debut feature, writer-director-cinematographer Mark Jenkin takes a parable about a contemporary fishing community under threat from wealthy outsiders and presents it in a style reminiscent of documentaries of the early 20th century, namely Robert J. Flaherty’s 1934 film Man of Aran. The result is titled Bait, a punky, pastoral little movie that draws from the mysticism and iconography of documentaries like Flaherty’s but with a narrative and ironic wit that is inescapably of the here and now. Put it this way: the director may have had those films in mind when he chose to shoot Bait on 16mm and have it processed by hand–for purposes of wear and tear–but perhaps less so when he wrote the scene in which a man on a stag party boards a boat dressed in a large penis costume.

It is that kind of anachronistic counterpoint that makes so much of Bait such a blast. The action takes place in a small Cornish harbor town in the English Southwest. Edward Rowe plays Martin, a fisherman without a boat—i.e. he might as well be missing a limb. Martin and his brother Steven have recently lost their father and his trawler is now used by Steven to take pissed-up day-trippers on coastal tours. Martin stubbornly sticks to his principles and continues to catch fish on the shore even though they eventually end up on those same tourists’ plates, sold as yet another “local experience.” Jenkin builds the tension of his film on the uneasiness of this relationship of quasi-servitude. Chief among the blow-ins is Tim (Simon Shepard), the patriarch of a wealthy family from London who has bought not only Martin’s family home but also the entire harbor-front street that it sits on. Twisting the knife, Jenkin has him and his family living in Martin’s old house while renting out the rest on Airbnb.

Jenkin steers this tension in subtle ways and does well to hold back on Tim’s villainy, despite the casting of Shepard, whose haughty accent drips with inherent conceit. “I’m supporting local industry,” he proclaims to Martin in one ill-advised moment, to which Martin duly replies, “What fucking industry!” (The best villains are always those oblivious to said villainy). Jenkin softens his edges further by showing his family in a better light: wife Sandra (Mary Woodvine) is democratic; daughter Katie (Georgia Ellery) is kind. Katie even gets to enjoy the early shoots of romance with Steven’s son Neil (Isaac Woodvine), a dashing lad who has taken to working with Martin on the seafront. Yes, there is no doubting whose side Bait is on here but there is a bigger picture being looked at. Martin and Tim are symbolic of a rural-urban divide and Jenkin’s film contains a powerful warning about the perils of that disparity. Tolerate this and your children may indeed be next.

Jenkin’s script is peppered with comedy, occasionally of a more subtle variety than men dressed as penises—even if that drew the biggest laugh. There is a sense of play to the editing and use of close-ups that suggests the right kind of appreciation for La Nouvelle Vague. His script is a killer too, packed with drama, showdowns, and dialogue that leans welcomingly on the colloquialisms of the English Southwest. Martin’s visits from his deceased father add a welcome and poignant touch of surrealism. Jenkin’s dusty, crackling images contain an artifactual beauty, especially in the stunning silhouetted shots of Martin and Neil on the beach. The film’s secret weapon is a young waitress with a Polish name, Wenna Kowalski (Chloe Endean), who Martin takes a fatherly shine to. Most importantly, perhaps, is that the director is clearly of this place and that sincerity and concern transcends. For the very same reasons the stakes feel higher and Bait will ultimately prove to be a heart-wrenching little tragedy. It is an exquisite one, too.

Bait premiered at the Berlin International Film Festival and is streaming on FestivalScope through April 22.