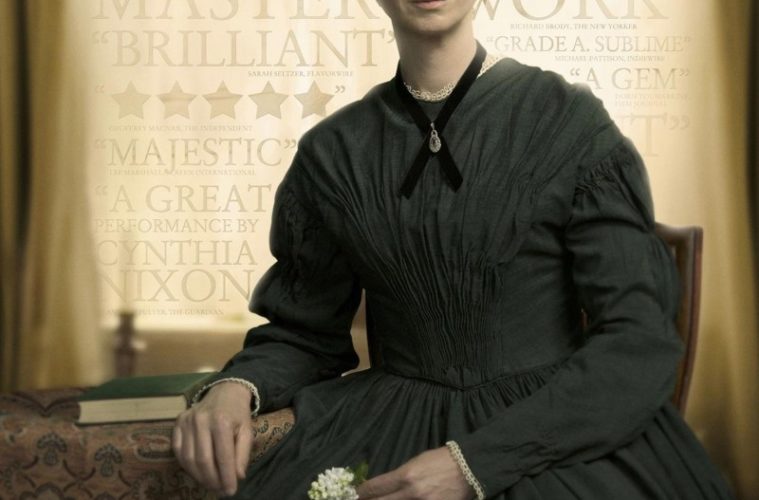 “You are alone you your revolution, Ms. Dickinson,” spouts a stoic headmistress in the opening sequence of A Quiet Passion, a biopic of 19th-century American poet Emily Dickinson and the latest work from proud Liverpudlian auteur Terence Davies. In the scene, young Emily has apparently rejected both a life in the seminary and the option to be a practicing catholic, a decision the famously atheistic director clearly vibes with. That sense of empathy and understanding with his subject is rife throughout this quietly cleansing and exquisitely considered film, which shows the writer from her late teens (portrayed by Emma Bell) through to adulthood (Cynthia Nixon) and old age.

This frank introductory scene is one of a few exceptions — it occurs outside the grounds of Dickinson’s family home, where the majority of this film takes place. Here, Davies imagines and reenacts delicately detailed social exchanges between the family members and their various bourgeois guests. Admittedly, the material sounds stodgy as hell, but each set piece is dealt with such a lightness of touch that the resulting mood is often quite breezy. Her sister (Jennifer Ehle), father (Keith Carradine), brother (Duncan Duff) and mother (Joanna Bacon) each compliment and provoke different shades of Dickinson’s supposed psyche. Her poetry is represented through Nixon’s beautiful off-screen recitations and her relationship with The Springfield Republican, a local Massachusetts paper that was the first to publish her.

Nixon and Davies’ Dickinson comes off as a battle-hardened, often self-deprecating woman, but also proudly spirited and, at least in her early years, with a tremendous appetite for joy, humor, and life. Content with — or perhaps accepting of — a life in the family home, the film only fleetingly delves into the writer’s romantic life. A brief, significant moment with a married reverend offers the least-ambiguous insight. As Emily states to her sister, “Those of us who live minor lives, and are denied a particular kind of love, find it easiest to starve.”

Nixon excels in this choice role, bringing bags of warmth and spirit to Dickinson while retaining the ability to wield a sharp edge whenever called upon. The actress’ famously open, aghast expressions are used to great effect in Passion‘s more comedic moments, of which there are surprisingly many. As usual, Davies works from his own screenplay, and his dialogue has the type of dense, eloquent, theatrical quality that might easily have sounded stagey and stilted in the hands of a lesser performer — or indeed a lesser cast. Nixon and her supporting players succeed in making their characters both human and of their time.

With the assistance of German cinematographer Florian Hoffmeister (who shot The Deep Blue Sea), A Quiet Passion has a detailed, spatial quality seldom seen in period dramas. There is a patience to lingering takes that seems to coat the film in a cooling naturalism, as if it somehow takes a deep breath and slowly lets it out. Such moments give a wonderfully clear impression of the pace of life and textures of the time, and that pace and calm occasionally opens up the space for something higher.

The great theme of Dickinson’s life, Davies argues, is finding solace — not in religion, but in art, and A Quiet Passion itself can boast such moments of quiet catharsis. The music in Davies’ film is never decorative or manipulative; to the contrary, it’s given the same sort of stylistic importance as a close-up. The first of such sequences — in which the camera rotates 360 degrees around the living room as a string ensemble plays — is almost transcendental in its low-key rapture. A long dissolve later on — another Davies signature move — from a window to a preacher is just as powerful. With music, location, and camera movement symphonically combining, it’s in these moments that A Quiet Passion seems to bloom. David Thomson’s “motion and emotion” until the very last shot.

A Quiet Passion premiered at the 2016 Berlin International Film Festival and opens on April 14, 2017.