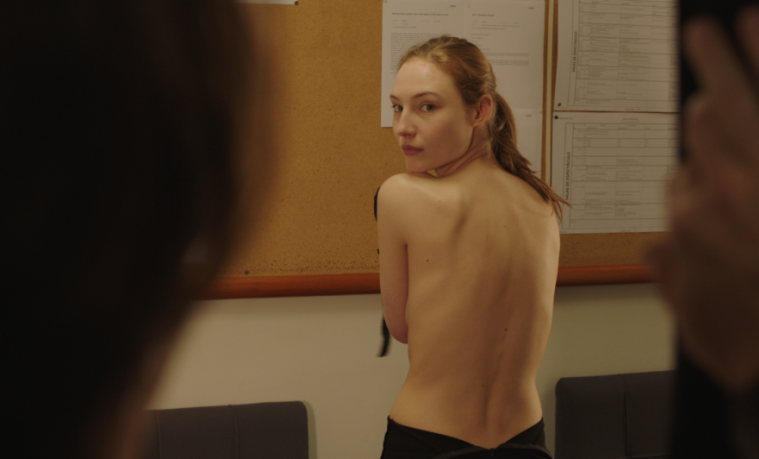 If the reception to Ewan McGregor’s American Pastoral has shown us anything, it’s this: those who adapt one of the great living authors would be best-advised to go small or, at the very least, head into their endeavor with a bit of experience. Benoît Jacquot is doing both with a big-screen take on Don DeLillo‘s slim and, in all honesty, little-loved 2001 novel The Body Artist. It’d previously been in the hands of Luca Guadagnino, who’d, at various points, cast the likes of Isabelle Huppert, Sigourney Weaver, Denis Lavant, and David Cronenberg, the one man who’s already taken a DeLillo text to the big screen. (Game 6 doesn’t quite count, though it’s a Cosmopolis first draft nevertheless worth seeking out.)

Now titled Never Ever (À jamais in its native tongue), it’s arriving under his supervision, with the none-too-small help of Mathieu Amalric and, in the lead role, newcomer Julia Roy. The reception from its Venice and TIFF showings has been solid, if not necessarily the sign of some DeLillo-adapting renaissance. For those of us at home, there’s an opportunity to get some sense of what the movie will offer in a brief trailer. Being a great admirer of involved parties, this is one I’ll have to be looking out for.

Watch the preview below, followed by the TIFF synopsis:

Benoit Jacquot’s À jamais, based on Don DeLillo’s novella The Body Artist, is as brilliantly imagined and highly disciplined a film as you will see this year. Elegant, meticulous, deliberate — it’s a work whose logic forcefully propels the narrative from the opening shots. In this moving story of a love affair and its strange fate, Jacquot turns the screws while taking us through a series of emotions, all carefully elicited in his desire to get to the core of DeLillo’s unsettling story.

The film swirls around a self-centred filmmaker (Mathieu Amalric, also at the Festival in Daguerrotype) who, during a screening of one of his films, wanders into an adjoining gallery and becomes mesmerized by a young performance artist (Victoria Guerra). Dumping his leading lady and long-time lover, Rey embarks on a wild and delirious affair with the equally willing Laura, who jumps on the back of his motorcycle and rides with him into instantaneous love. Holed up in Rey’s remote country mansion, the couple appears to have found bliss — until, one day, Laura is disturbed by strange noises that turn out to be a prelude to disconcerting developments. The dreamlike world the two have constructed slowly begins to come apart.

What follows is as surprising as it is compelling. Jacquot and his cast ramp up the suspense as the relationship between Rey and Laura turns in unexpected directions.

Full of black humour and a few twists, À jamais delves into the most personal aspects of its characters’ interior lives. Jacquot provides the touch of a master in this tale of self-destruction, and a man truly in love with himself.