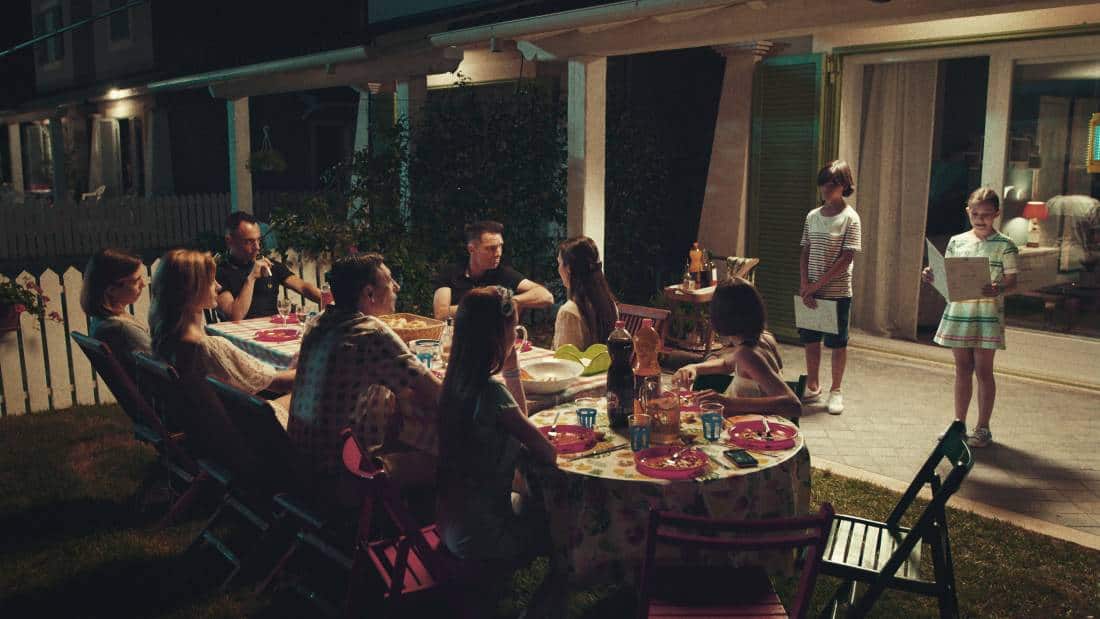 Amid the litany of horrors the biting little film Bad Tales presents, there might be a pinnacle: reading out your middle-school report card to a dining table of your parents’ closest friends. Although young Dennis (Tommaso Di Cola) and Alessia Placido (Giulietta Rebeggiani) have a stack of straight A+’s to unveil, they go through their paces with a haunted, almost inhuman stillness. The camera holds the shot in near-real time, tracking each excruciating second as the kids slowly leave the table, and return, gifted-level grades in trembling hands. But are the film’s writer-directors, twin brothers Fabio and Damiano D’Innocenzo, after our approval in an equally desperate fashion?

Bad Tales is contemporary Italian realism left to corrode and mangle out in the broiling Roman sun. The color palette is tweaked sickly yellow, and the camerawork stays at an austere distance, hovering but never pouncing like the continual buzz of cicadas that litter the film’s sound design. Noting the issue of realism, can it be so when each character (but especially the adults), and each bleak situation they inhabit, exist mainly to coerce the audience into maximum discomfort? The D’Innocenzo’s succeed better on the edges of this question, with a chemistry teacher’s pitch-perfectly mundane dialogue about vending machines in the school staffroom, and some of the most grotesque close-ups of food (oozing cafeteria pomodoro sauce, moldy pizza) you could scarcely imagine. For the latter––which evoke the bacon sellotaped to the bathroom wall in Gummo––”hyperrealism” is the better descriptor.

The D’Innocenzo brothers give us three family units to alternate between, all trapped in a soul-sick malaise that their children will bear the ultimate brunt of. Bruno (Elio Germano, the highest-profile actor here, and a veteran of films by Luca Guadagnino, Abel Ferrara, and Pietro Marcello) heads the Placido clan; he is unemployed, but we never learn the circumstances behind this. The Rosa’s reside next door, whose patriarch Pietro (Max Maltesta, with a Shea Wigham-esque flattop cut) extols his success pioneering a new form of shampoo at the family dinner, mentioned before. And there is a lower-class family, presented with a bit more tolerance and sweetness, composed just of Amelio (Gabriel Montesi) and Geremia (Justin Korovkin) Guerrini who live in a trailer, and brush paths with both generations of the other families. These families’ fortunes congeal not so much in a network narrative (as in Happiness or Short Cuts) but as vignettes composed with a cruel, paper-cut sharpness, all leading to a slow-dawning jab of horror.

Most disturbingly, the children’s experiences are prematurely sexualized. Amelio uses a playdate with the Rosa’s daughter to encourage Geremia to lose his virginity; these children are barely pubescent. And dotting the story with black comic relief is a young pregnant girl (Ileana D’Ambra) who flirts with Dennis, and later squirts her lumpy breastmilk onto a cookie for him to eat. For all its obvious provocation, these choices by the filmmakers are at least true to the tentative and curious ways young people start to explore their sexuality for the first time. As said, it’s when the confrontational sense of realism comes at the level of details as opposed to grand design that Bad Tales convinces most.

There’s a continual feeling in this picture that the D’Innocenzo brothers––already highly-rated in the Italian industry in their early 30s, and screenplay winners for this film in the 2020 Berlin competition––are still growing their storytelling ability, experimenting what volatile hues a more conventional family drama could contain. Even if the impact Bad Tales creates ultimately feels cheap, there’s no denying the force and expert construction of it. They have two films already in post-production, one in English, and another in Italian mounted at a bigger scale. Where else do you go after such virtuosically executed unpleasantness?