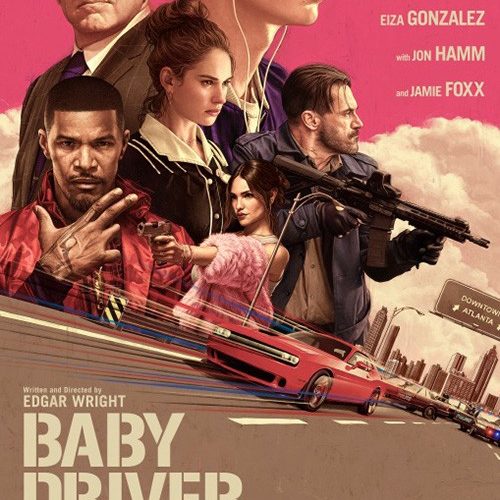 Whether or not he is, in fact, the first person who thought to create rhythm between non-diegetic music cues and diegetic gunshots, the gesture is but a plethora of instances throughout his newest film, Baby Driver, wherein Edgar Wright eats his cake while having it, too. Impressive yet par for the course: his run from 2004’s Shaun of the Dead to our current moment has been modern comedic cinema’s best, full stop, because Wright doesn’t simply apply technical precision and innovation to genre-smart storytelling — he also makes what must be exhausting work look like so much fun.

And as a crime caper, heist movie, mob tale, puppy-love romance, jukebox-musical-of-sorts, Baby Driver is almost nothing but. Its set-up — Baby (Ansel Elgort), who listens to music so constantly that it’s baked into almost every single scene of his movie, is the best getaway driver in the game but, needless to say, winds up in over his head with a crime lord (Kevin Spacey) — lacks for fussiness à la Walter Hill’s The Driver (an obvious comparison made all the more legitimate by that director’s passing cameo towards film’s end), though Wright et al.’s prowess makes it, for me, a cut above entirely.

That could ring as a callous dismissal of Hill’s still-very-fine picture were it not for Wright’s deft emotional ambitions and particular means of bringing them to the fore, nor the fact that he, like his predecessor, wastes zero time getting the basics down: Baby Driver‘s opening sequence finds its namesake minding the getaway car outside a bank and rocking to a cued-up tune as companions (Jon Hamm and Eiza González are the two who will recur) carry out a robbery — or, we could say, sticks us with the inverse of what a director should be showing at this moment in time. Except that this movie is incapable of stopping. A swoop of the camera to the left, a swoop of the camera to the right, an unexpected set up-here, and a hard cut there put him at the center of the world — until, of course, the robbers return, the cops notice, and a game of rubber-burning begins. The jolt-inducing bit of chase work that ensues is marked by an expected supply of quick cuts and breathless dashes through space, but, for as much there’s pleasure in the near-misses and hard crashes, stands from its oft-underwhelming brethren by predicating twists and turns more upon the grace of a car’s movement and a certain anticipation of action, DP Bill Pope’s camera spinning to capture events in ways that, sans digital work that would here be utterly invisible, don’t feel entirely possible all as the plurality of images — overheads, in-car reactions, POV shots — add uncertainty to not only what will happen next, but how.

Mind the fact that this, the movie’s big bang, all unfolds within a matter of minutes. There’s a precedence to it that might be cause for concern; countless times does a film of this sort open with a punch before the interminable attempt at, for wont of some nicer term, “a real movie.” While Baby Driver will, of course, slow down by virtue of not always being in pursuit-mode, editors Jonathan Amos and Paul Machliss keep it speedy, cutting Wright’s melange of considerately framed shot-reverse and insert shots into a to-the-bone, no-fat, all-protein assembly. This is not the insane level of energy expended by Scott Pilgrim, and one — assuming “one” also thinks that picture’s assault of shot set-ups, transitions, on-screen effects, and sound cues may have very well pushed cinematic language forward at least a half-step or so — wishes a film about such a hyper-focused-yet-hyper-active character moved a smidge more to that degree.

Being still leagues above almost any verbiage I’ve seen in a studio movie this decade, it’ll do just fine, not least of all when Wright shows off well in this rare solo outing as credited screenwriter. However many features in, there’s little surprise for a fan’s ears that the verbosity is punchy and culture-smart in a way that’s almost-but-not-quite easy-looking, and his oft-impressive sense of incident — occurrences within a larger narrative structure; the construction of one thing, micro or macro, off another; the escalation essential to that style of construction — is keener than ever. (And perhaps casts further light on how poorly many of Baby Driver‘s ilk try to play this game, but that’s a different story for another day.) Its solid 113-minute runtime is fulfilling rather than enervating, most amazingly in an action-heavy climax of false ends and fake-outs that stack on top of each other so as to lead us towards a well-earned resolution for its two leads.

About that: Elgort’s soft-faced looks do little to portend a nicely convincing turn as the deeply damaged Baby, who could’ve been easily plunked from a YA story about traumatized youth and their deep pain — an initial impression that crystallizes upon meeting Lily James’ Debora, at which point the touched protagonist breaks from his Chauncey Gardner-like habit of almost exclusively speaking his name, repeating lines, and communicating in grumbles and some variety of “uh.” Their chemistry is palpable, enough to sustain its own film, charged in a way that’s too good to even ask for — if perhaps a bit too separate-feeling from Hamm, Gonzalez, Jamie Foxx, and Spacey, all dressed for the part and game for Wright’s rapid pace.

Wanting more is sometimes preferable to needing less, and I’m plenty content to groove with almost anything Wright’s strung into this tapestry. Though his taste for visual and aural architecture, the little moments that elicit a chuckle in their own he-really-did-that sense of surprise, evince some uncanny skill for tapping into a character’s perspective, the entertainment value is absolutely not to be treated as secondary, and his is a cinema where pleasure may emerge from merely partaking if one were only inclined to engage on that basic level. You may not, like I, find it a keenly moving film about at once accepting and moving on from the external factors and personal choices that come to define us, but how nice a package you’ll otherwise receive: an immensely satisfying two hours at the movies that won’t make you regret seeking some thrills and laughs for your too-expensive ticket. Sometimes that’s the only reasonable thing to request when walking through the door.