Avatar: The Way of Water Review: James Cameron’s Sequel is a Misbegotten Pleasure 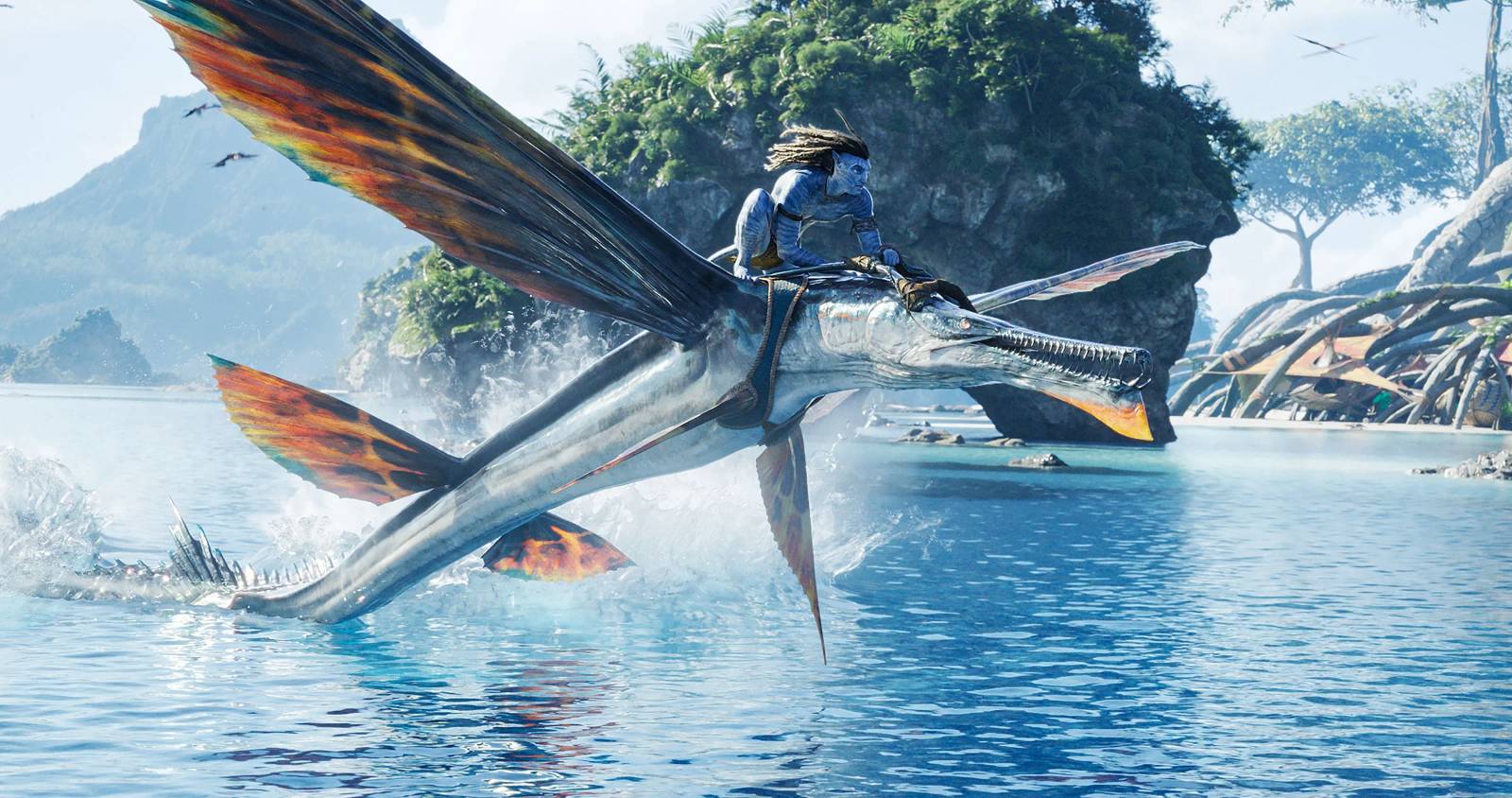 “Wow, this is uncomfortable” was my first thought watching Avatar: The Way of Water. James Cameron’s sequel—so long-rumored, delayed, confirmed, delayed, discussed, delayed, produced, delayed that I couldn’t totally believe I’d see it as 20th Century Studios’ logo sped across the screen at a peculiarly fast pace—had demanded I don Dolby 3D glasses that latched onto my nose as if fingers of a casino pit boss noticing I’d cheated the craps table.

“Wow, this looks rough” was my second thought watching Avatar: The Way of Water. Rough not in the going-native tradition James Cameron’s franchise has embraced vis-a-vis groundbreaking, cutting-edge, eye-tickling technology. Rough, rather, in that this all looked quite bad. Fast—48 frames a second within which everybody technically (?) proceeds at the pace of how our eyes conceive normal motion. Reinstall the factory settings you already deactivated on your television: that’s a basic approximation, except it’s very big and loud and you can’t leave.

As mild waves of glasses-induced pain traveled across my body I started wondering if I’d made a mistake. Have we begun the King of the World’s long-predicted, never-fulfilled folly? An admirer couldn’t take it. The ensuing 192-or-so minutes—some feature Kate Winslet performing underwater sign-language with a clairvoyant whale; others were devoted to a love song by The Weeknd—didn’t always answer this question.

I was mostly thinking about 192 minutes. Three hours and twelve of them. How could you not? When a very long movie starts poorly—rushing along exposition, bluntly seeding character beats and narrative stakes we can of course expect to “pay off”—it’s not unlike sitting on a plane whose captain has announced we’ll soon experience turbulence. But we’re here for the long haul and James Cameron is great and all things considered it’s best to find some value. It’s helpful that this director couldn’t leave us starving for visual interest if he tried—the biggest CGI skeptic will at least bask in certain colors, marvel at some defined textures, might even remember that expensive movies used to put their money on the screen. Inadvisable as key frame-rate choices are, the final majority of 192 minutes play nicely at the standard 24. The 3D is unobtrusive, if hardly immersive.

I was zoning-out because something looked cool. Something looked cool because I was zoning-out. A white child with dreadlocks keeps showing up and I’ve decided this is also kind of cool. I zoned out so much I began to think about my own life, in which nothing has ever looked cool, only to reach some moment of clarity, or delirium disguised as such, but at least I was at last thinking something: this movie has the greatest ratio of zone-out time to narrative comprehension I’ve ever experienced.

Is this because it’s well-plotted? Is this because it’s extremely simple? Let’s suggest the difference was split. Or that The Way of Water’s story was designed at odd, compelling angles and ends: it does less to tie various threads stretching across Pandora than present them over a strangely indiscriminate playing field. Scene after scene (after scene) in one location, from one set of characters, cuts to an entirely different spot and different group. The main plotline about hunting down the Sully clan—wrapped up in Stephen Lang’s returning villain, military bad guys with bloodlust, and a fathers-and-sons theme that never really dovetails—won’t dissipate so much as be sidetracked for (just guessing) 126 minutes of Na’vi interacting with a new aquatic environment. So we go fishing. We swim with whales. We help whales who’ve been injured. James Cameron lets us see through the POV of a whale. Have I already mentioned Kate Winslet doing underwater sign-language with one? It’s more important to note some scenes (one? 12?) later this movie seems to hinge its plot on that whale’s ability to tell the future.

Around this time I suspect I have lost my fucking mind. Yet something coheres. Mostly that The Way of Water suggests James Cameron, a self-described child of the ‘60s, used his unfathomably expensive and resourceful platform to vibe. Which is insane. What could it even mean when James Cameron vibes? I was glad to find out, maybe just relieved—the choice between pretty sights or plot and character I couldn’t totally sink into isn’t much choice at all.

Cameron, somewhat contra this initiative, also loves weapons, vehicles, vehicles as weapons, and what it looks like when those things destroy a body. On which front The Way of Water delivers far above its predecessor, or for that matter any animated movie. A man who has gladly watched more than three Straub-Huillet films was finally reduced to “fuck yeah” watching chaos unfold on largely artificial planes. Thank a directorial hand that’s rather pluralistic with shot choices—traditional in the interplay of mediums and wides, but across any given sequence opting for new set-ups that refresh our four-eyed, three-dimensional point of focus. (In so doing there’s far less suggestion of Aliens or Titanic than a Hideo Kojima game. Which: great.) Visual schema that can enliven some plodding conversational stretch will pay dividends when it’s time to shed blood, mingling physical choreography with editorial speed and bluntness.

Our available six-or-so hours of Avatar are enough to surmise what does and doesn’t work about these films, sometimes despite myself, I ultimately do like. Lots of it is wrapped in this shot. It stands, to these mortal eyes, the most impressive ever achieved by digital means for how it supersedes skepticism of digital means: the tensing of muscles and veins, their meeting with water, the reflection of light off artificial skin—in one moment someone finally vaulted the uncanny valley big-budget movies spent decades crashing into face-first. Revolution, like David Bowie said, comes in the strangest ways.

Certain periods—seen in Disney-provided Dolby 3D HFR—impress to nearly the same degree; there are also quite a few that don’t. The further Cameron’s scope expands from a Na’vi hand or face the more his team of artisans struggle conjuring something that passes from some realm of impressive and into the living, breathing. (A few underwater creatures recalled this arcade game that was enjoyable to a kid waiting for his parents to finish shopping in Wal-Mart; hardly state-of-the-art, though.) Through admiration and exasperation alike one wishes The Way of Water could slow down, scale down, let the eye meet something it can register, and if I won’t go so far as to tell James Cameron he might benefit from aping Bresson’s compositions or Warhol’s screen tests that’s only because Avatar 3 has already been shot.

Anyway. 192 minutes have passed at a decent clip, the glasses finally come off, slight derangement rules the night. Ignoring any opportunity to burrow into the how and why of James Cameron’s mega-sequel, I immediately recalled those poor souls left longing for Pandora so many years back: maybe I didn’t fall so deep, but jetting from the aquatic Na’vi landscape to a Times Square multiplex lobby to the overlit, raining metropolis absolutely scrambled something. I’m probably still seeking to get it back.

(P.S. — amidst all this I forgot to mention Edie Falco drinks coffee in a giant mech suit. I’ll remember it when Avatar 3 opens, against every known law of God, in only two years.)

Avatar: The Way of Water opens on Friday, December 16.