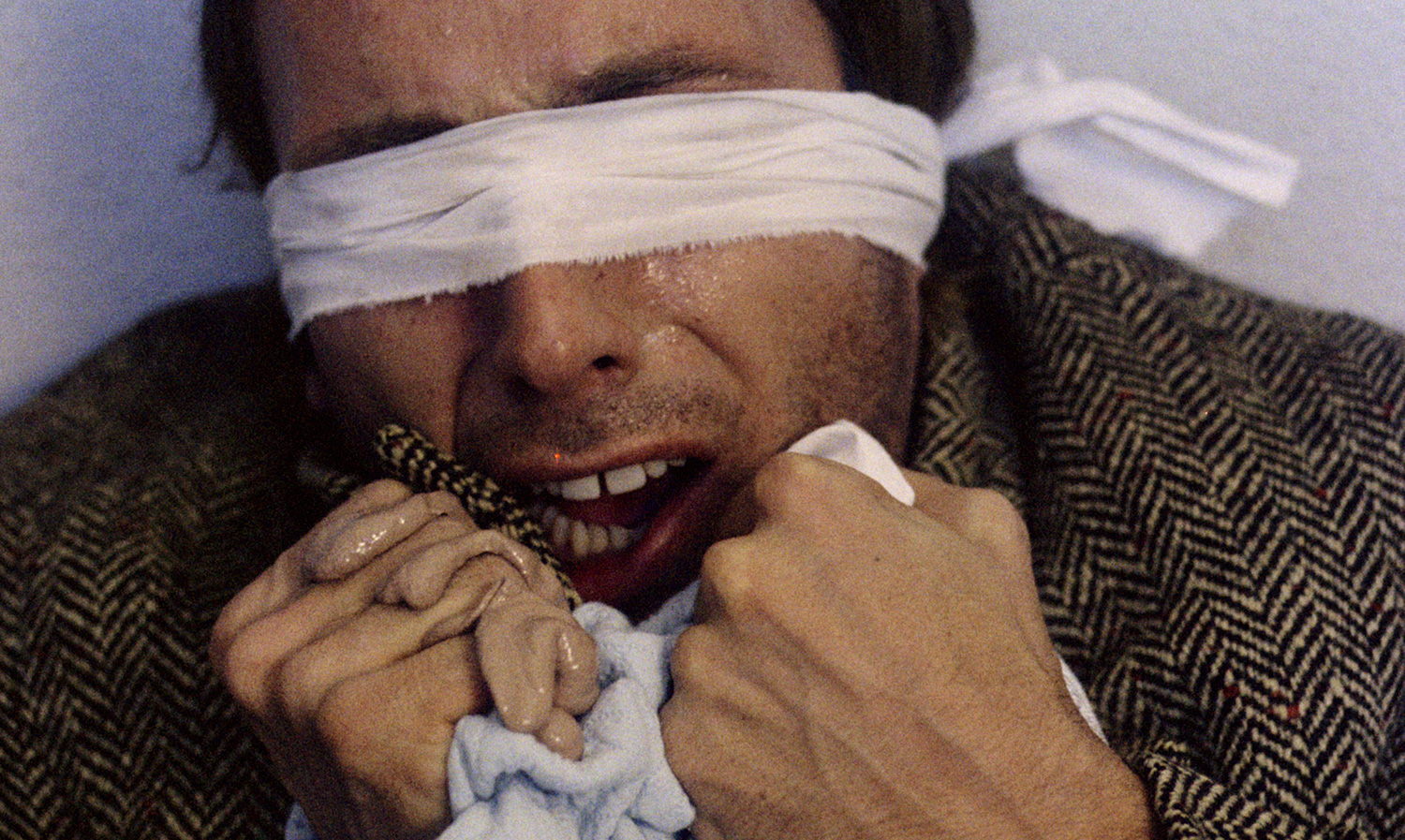 It’s not until heroin is mentioned that Ana Turner (Cecilia Roth) stops and reconsiders the offer to partake by boyfriend José Sirgado (Eusebio Poncela). She’s game for acid and coke, but that stuff causes addiction. It ruins lives. “Not if you don’t take too much,” he says—a line he recently heard from an acquaintance named Pedro (Will More). This guy is a basket-case recluse who can barely muster two words while looking creepy in the corner of the room, staring daggers through the back of José’s skull. After snorting some heroin, though? He’s a Rhodes scholar ready to take on the world with slicked-back hair and confidence to spare. That’s when Pedro can explain his art and prove it’s more than what you can see.

This is a necessity, considering José is a “real” filmmaker scouting locations for his first movie starring Ana. To sit down and watch this amateur living out in the middle of nowhere with his mother talk about Super 8 home movies depicting random sights isn’t something he has any interest in doing. The only reason he’s here is because his friend Marta (Marta Fernández Muro)—who is Pedro’s cousin—has talked him up as an eccentric curio worthy of fascination for no reason other than being in on the joke when laughing about him later. Supposedly he cries in his room while screening his own work. Not because it’s sad, but because it disturbs him. It’s a compulsion. A drug. He couldn’t stop filming even if he wanted.

Whether aware or not, José can’t either. That’s the comparison writer/director Iván Zulueta is making when pitting these two very different men together at the center of his film Arrebato. They may hate what they create (Pedro via limitations and José via studio interference), but they keep going anyway because they’re driven to find meaning to it all regardless. It’s a search for the “pause.” The goal is to gaze upon something and find you’ve lost hours in its grip. We initially think Pedro is hypnotizing those he challenges to sit and absorb that which he places in front of them, but we soon discover nostalgia as the cause instead. It’s like he knows exactly what he needs to engage his audience and they crave the experience.

José doesn’t realize this craving either. He may have known when caught in a trance a year earlier in Pedro’s room, but that was a lifetime ago. He’s just returned home from finishing his second film and all he wants is for it to be over when his past comes back into focus. We don’t know how he and Ana broke up, but he isn’t happy to find her asleep in his bed. And the handwriting on a package containing a reel of Super 8, a cassette, and a key does nothing to spark his memory until the voice speaking to him from the tape player jogs his consciousness. That trip to Pedro’s and the heroin offer to Ana? Those were flashbacks. Most of what we see is.

The whole is narrated by Pedro’s raspy voice as José listens to the message. When he talks about their first meeting, Zulueta takes us there. The same goes for the second and last time they were together. Then Pedro discusses everything that occurred afterwards: how the interval-timer José gifted him to shoot time-lapse created an anomaly while he slept. His camera filmed him one night without his knowing, leaving a frame of red in the middle. Pedro thus intentionally films himself the next night to find two frames upon developing it. The reel he’s sent José is the result of his experiment to learn what is happening in those gaps as he explains his desperation to keep going and stave off the crippling withdrawal whenever he stops.

We become a prison to Pedro’s obsession, just as José is while sitting on his couch. It takes over his life to the point where not even his rekindled desire for Ana can get him to stop watching. The intellectual and psychological high turns José impotent to her advances, just like the heroin used to, while Pedro’s constant evening sessions turn him into the slick-backed-hair version of himself like it did too. This mystery becomes their soul, the camera their drug. It’s metaphorically stealing their life like a vampire would, erasing them from the frames of their existence one by one until… that’s what we’ve come to find out. Clues are hidden in the past, context supplied in the present. And the future bides its time.

It’s not as confusing to keep up as it might seem, thanks to touchstones like José and Ana’s present wardrobe and apartment status keeping us aware of what’s taking place now and what’s a memory of then. That doesn’t, however, mean everything will make sense. Zulueta throws in a ton of brief, unforgettable moments blurring lines between reality and hallucination as Pedro’s mindset begins to deteriorate (or transcend, depending on its veracity). Blood appears at the corners of mouths with a mixture of sensuality and pain, keeping alive the allusion of vampires even if the film has no desire to make their appearance overt. It’s more about reference and symbolism than truth—sex, drugs, and art commingling in a pool of desire, pleasure, and torment.

That Arrebato has waited more than 40 years to receive a bona fide U.S. theatrical run is wild; it lives up to the cult-classic status it’s held since 1979. (The marketing push highlights it being Pedro Almodóvar’s favorite horror film.) Its parts recall many later works as diverse as Trainspotting and The Ring, its depiction of addiction and stasis leading us towards a legitimately brilliant ending that brings the whole thing into meta territory with its film-within-a-film coaxing us to enter the fray ourselves. Our need for answers ratchets up to a potent boiling point, as is surely Zulueta’s intent. He’s not interested in the release, just the rapture. He wants us to chase the high and live in its glorious potential.

Arrebato launches in 35mm at both NYC’s Anthology Film Archive on October 1 and LA’s Nuart Theatre on October 8 before its 4K restoration expands to more cities. Details here.