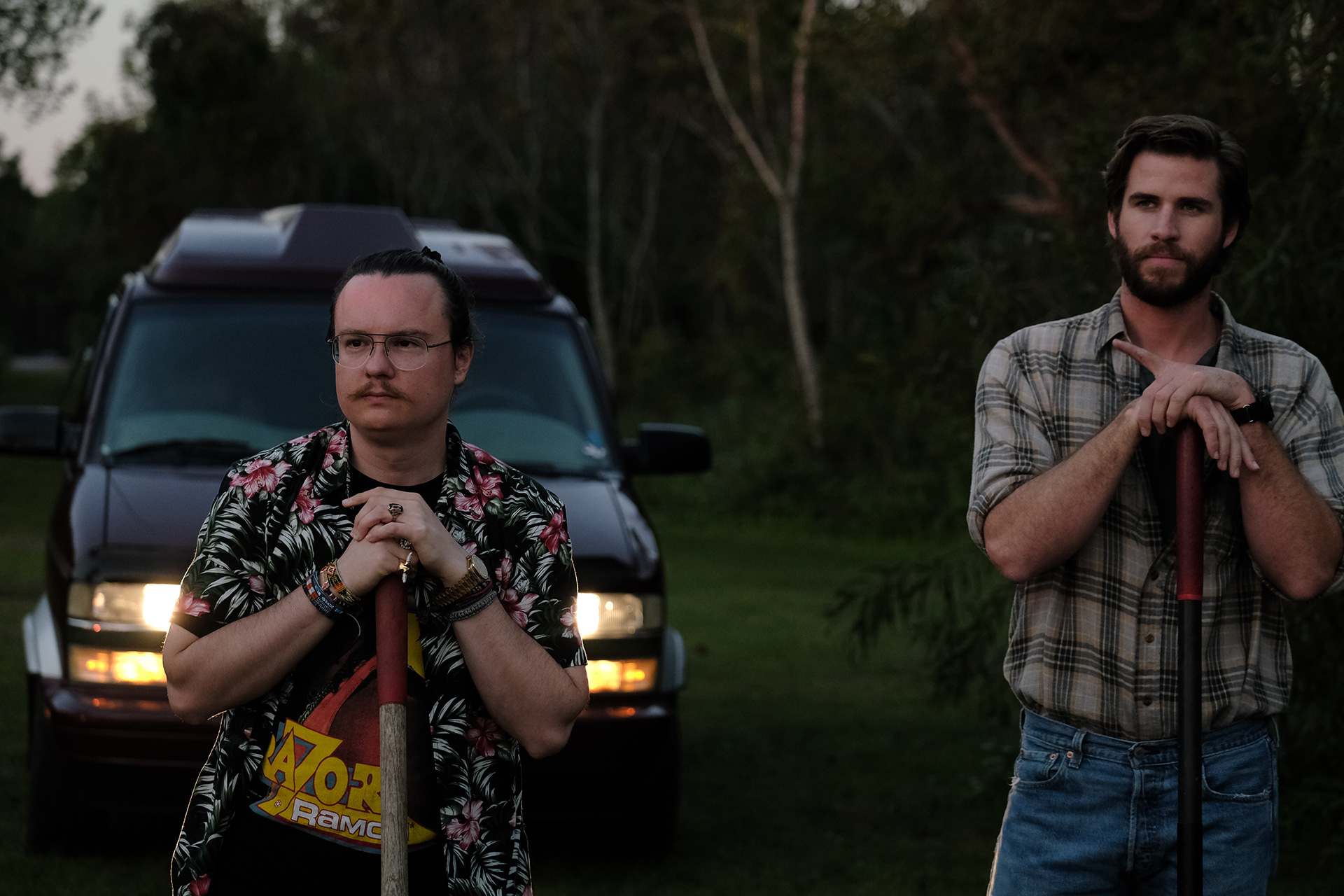 As Kyle (Liam Hemsworth) shares during an early voiceover, organized crime in the backwoods of southern America isn’t very organized. This is good since few of the people in the wholesale drug dealing business of which he’s operated for just a little while are smart. He probably wouldn’t call himself very smart either since he’s content to follow his orders to the letter rather than harbor ambitions about becoming the boss. He’s perceptive in ways that ensure he maintains an upper hand in all situations, but never greedy enough to tip things so far off-balance that he has nowhere to go but down. Kyle sees the angles, parses secrets, and plans ahead in the hopes of staying alive long enough for none of it to matter.

So it’s no surprise he’d end up getting paired with his antithesis in Swin (Clark Duke). Kyle’s new partner would consider himself smart and he’ll let anyone with an open ear know all about it while simultaneously sticking a foot in the same mouth that’s doing the talking. Swin likes cracking jokes that often get him into trouble and has a penchant for being highly distractible at the worst possible moments. He’s dependable, though, and loyal. He knows Kyle’s strengths are just what he needs to keep his head afloat and that he can offer his own bit of value back to counter his cohort’s menacing silence. Did they think they’d be living together in a state park under a state ranger’s (John Malkovich’s Bright) protection? Not likely.

That’s a fitting notion, however, since nothing about Arkansas is necessarily predictable. Little things are such as inevitable progressions forward and the types of trouble soon to arrive, but not the ways in which each new revelation plays out. A lot of this is due to Duke (who directs and co-adapts along with acting) and Andrew Boonkrong’s script. Based on the John Brandon novel of the same name, each subsequent chapter brings with it a piece contextual clarity we didn’t even know we needed. This helps to keep us guessing as characters are often introduced right before the script is ready to fully utilize them. What began as Kyle and Swin jumping when Bright said hop quickly expands until their enigmatic boss Frog and unplanned futures are exposed.

Saying too much would ruin the fun once the clock rewinds to the 80s to see how Frog got his start and made his tiny empire with people like Bright and Her (Vivica A. Fox) serving as buffers to deal with the likes of Kyle and Swin. We’ll eventually meet an eccentric tchotchke trader (Vince Vaughn), an old school drug dealing mentor (Michael Kenneth Williams), twin heavies who have just enough grasp on the ins and outs of what Frog does to make it seem like they aren’t liabilities (Brad William Henke and Jeff Chase), and the soon-to-be apple of Swin’s eye (Eden Brolin’s Johnna). Add a wild card in Chandler Duke’s Nick to threaten the boredom Bright loves so much about his job and anything is possible.

The film bills itself as a suspense thriller due to the predicament Kyle and Swin must eventually try to escape, but it works best as a comedy using that narrative drama to entertain regardless of the stakes. That Swin can’t stop himself from blurting out some sort of dumb commentary helps, but so does the absurdity of the entire situation. Whether it’s Frog falling into power by way of bootleg cassette tapes or Nick getting distracted by an 8-track player when he should be torturing his captive, everything is just left of center. Heck, the lead pair enjoys state park upkeep whenever they aren’t on a run. They’re probably paid as part of their cover, but I’d like to think Bright makes them do it for free.

This odd couple’s relationship gradually grows close-knit despite Kyle’s penchant for believing his lone wolf identity is intact. He knows he should remain one considering connections get you killed in this line of work, but he and Swin aren’t like their peers. Frog says they’re the most dangerous foes he’s ever had to battle simply because they’re too stupid to predict. He’s right too: they don’t even know they’re fighting him thanks to the layers of subterfuge masking his identity and their fly-by-the-seat-of-their-pants mentality. And as Kyle and Swin get closer in crisis, we witness how similar connections buckle and unravel around them. The message is ultimately about knowing precisely when to cash-out because a partner can’t turn on you if you’ve already given them what they want.

You also never want to underestimate a friend. Maybe the weakest of the pair will be the strongest under interrogation. Maybe the dummy that’s so bad at fighting with his hands needs a gun more than your peace of mind needs him to be unarmed. Arkansas is thus a series of trust exercises between idiots, the fearful, and the too confident for their own good. Hemsworth and Duke are therefore the perfect team: brawny and scrawny. When intelligence outside of Kyle and Frog’s street smarts proves useless in a world that doesn’t so much as bat an eye when told you’re a drug dealer (What else is there to do in these backwater circles?), attitude ends up going a long way in its stead. Anyone can fake attitude.

I can’t say I had the highest expectations going into Clark Duke’s feature directorial debut, so knowing I came away with a smile on my face might need to be taken with a grain of salt. Despite being a bit rough around the edges, however, the source material is able to hide many imperfections by entertainingly keeping us on our toes. And while Duke typecast himself and written Swin to his strengths (so haters shouldn’t hope to be surprised on that front), Hemsworth is allowed some room that he isn’t usually afforded in films relegating him as a romantic partner. His Kyle is effective as the laconic straight man opposite the humor of Malkovich’s zaniness, Vaughn’s dryness, and Duke’s loudness. He’s a character worth caring about.

Arkansas hits VOD, Digital HD, and Blu-ray on May 5.