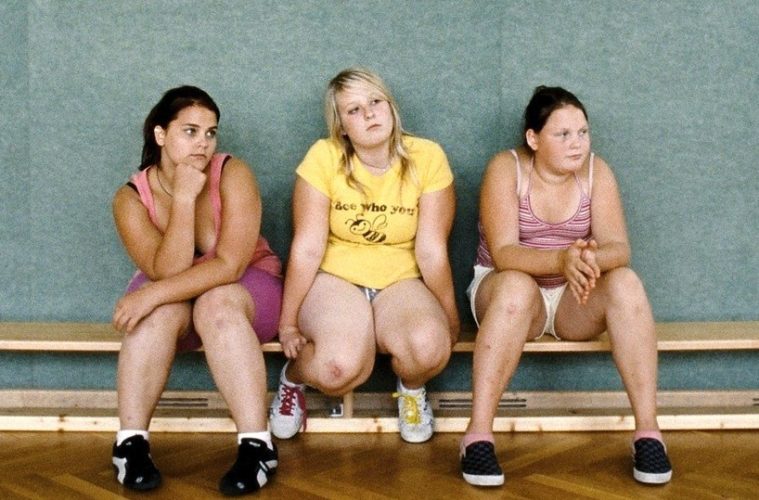 Ulrich Seidl’s films have attracted controversy for their explicit sex before, but maybe it’s the titles of his new Paradise trilogy, subtitled Love, Faith, and Hope, that make them so shocking. For the most part, they operate in ways completely contradictory to their titles, making a mockery out of both the idea of “paradise” and the sub-titular virtue. Of course, only Love is sexually explicit from start to finish, but the other two films are shocking in their own way. Faith is a twisted portrait of an overzealous fundamentalist complete with self-flagellating, and although it has one lingering orgy scene, the actions of the protagonist, Anna Maria (Maria Hofstätter), are the most disturbing thing about the film. Hope, on the other hand, delivers on its title without ironic intent. It’s a tender portrait of a young girl at diet camp making new friends and experiencing first love (love that is inappropriate, but also gets by without any actual harm).

The disturbing nature of the first two films, combined with Seidl’s already-controversial and divisive reputation, make it unlikely for the trilogy to find a large audience; in fact, Love was released this past spring but didn’t pass $25,000 in box office revenue, while Faith, which barely crossed the $6,000 mark this summer, is hardly any easier to watch. The more digestible Hope, which hits theaters this month, will likely lose prospective viewers because they have not seen the first two. Still, this is a rich trilogy that deserves a studious audience.

On first instinct, one might compare it to Krzysztof Kieślowski’s masterful Three Colors trilogy: The first two entries are depictions of loneliness before a redemptive third feature argues for companionship; the second film in each drift toward black comedy; they all share female-leads and entail separate narratives but contain a few narrative hyperlinks, and both stormed the festival circuit with premieres in the triptych of art-house festivals, Venice, Cannes, and Berlin.

Really, though, these are surface comparisons, built mostly around the coincidence of a less impressive second installment, quick turn-around, and similar thematic arcs that are also shared by the likes of Star Wars and Nolan’s Batman trilogy. Kieślowski’s films are lyrical, emotional experiences. Seidl’s are intimate, even claustrophobic, and brazenly realist in their aesthetic. But it’s this trilogy’s overtly confrontational nature, achieved largely by the symmetrical compositions and long-takes of Ed Lachman and Wolfgang Thaler, which make it so unique. Faith, to reiterate, is the trilogy’s weak link, a decent film in its own right but the least essential piece of the big picture. Both Love and Hope are portraits of characters trying to come to terms with their own body, and while Faith has elements of body-image—Anna Maria belts herself regularly, and her husband is paralyzed—its focus is on the perils of religious fanaticism. It runs a bit too long, coming off as a detached thesis statement at times, but the home drama, in which Anna Maria does a despicable and yet self-righteous job of caring for her paraplegic husband, maintains interest, and as Anna Maria resorts to cruel forms of punishment (hiding his wheelchair, for example), themes of self-reliance begin to emerge. Nabil becomes the sympathetic figure, and as Anna Maria breaks down trying to atone for everyone else’s sins, Nabil’s sudden need to take care of himself creates admiration and respect in a trilogy that has, up to this point, consisted mostly of despicable persons.  Still, it lacks the interest in body prejudice that the other two films have.

As a result, it’s precisely that self-reliance that best ties the three together. Love, about Anna Maria’s sister Teresa (Margarethe Tiesel) going to Kenya as a sex tourist, and Hope, about Teresa’s daughter, Melanie (Melanie Lenz), at diet camp, both follow their protagonists as they seek to accept their own bodies. In Love, Teresa’s tragedy is the realization that all of the men she thinks are accepting her are just prostitutes, and all her condescending remarks of the skinny physiques of the Kenyans turns on her. The tragedy is not so much the constant abandonment she encounters but her constant need for validation.

Melanie has much better luck. While Teresa takes a personal vacation and still seeks outside acceptance, Melanie is thrust into a larger environment, but the optimism comes not just in being accepted, but in her newfound confidence that lets her accept herself. Melanie goes through a lot, maybe even more than Teresa, but her friends help her help herself while Teresa’s try to resolve everything with paid sex. At first, Melanie is the only one unwilling to step on a scale in front of everyone else. By the end, she would not let others bring her down the way that her mother does.

The bookends of the trilogy make compelling companion pieces even without Faith, however. Both Love and Hope depict the power of prejudice and force the viewers to acknowledge their own. Teresa believes so heavily the acceptance she thinks prostitutes are showing her that she seems to truly believe that she isn’t paying for them. Seidl’s camera, which refuses to look away from the nude bodies of both the athletic natives and the borderline-obese star, forces the viewer to contemplate his or her own judgments and prejudices. Hope pulls the same trick without being so graphic; the self-acceptance and confidence that these kids have with their own body type forces western viewers to question their notion of beauty. That said, Love goes a step further, as its shocking opening scene consists of close-ups on mentally handicapped adults, and both race and gender signifiers are complicated throughout. If, instead of a group of women having a humiliating orgy with one male, it was a group of men and one woman, the scene would play very differently, and the women’s comments about the physiques of the Kenyans are certainly loaded with racial subtext; they are commenting on an “Other,” not someone who they see as being like them. These same aspects make Love an uncomfortable watch, but they also make it the trilogy’s highlight. The film has a great deal to say about the way we look for love and acceptance, the lengths that we will go to find it, and the hypocrisies and double standards we need to overcome in order to speak honestly about it. It’s easy to chide Teresa for her nasty behavior and racial prejudices, but it’s a lot harder to look inside yourself and see what you have in common with her. Love forces you to do that.

While Hope lacks the complexity of Love—it teases pedophilia, but despite the two grueling films before it, the resolution is surprisingly innocent—it may quietly contain the uniting thesis. In an early scene, one kid remarks that their parents are going through a “delayed adolescence.” Much later, Melanie calls Love’s Teresa while she is in Kenya, and leaves a message saying she hopes she is enjoying her vacation. It’s textbook irony, as we know exactly how miserable and crushing the vacation was, but it also validates the claims of delayed adolescence. In youth and in age, these women want only to be accepted for who they are and how they look. Seidl is able to show us that without ever approaching cliché, and he also implicates those of us who may hinder that level of acceptance. This is interactive viewing of a commendably frank level, and although each of these films has their issues individually, taken together, they effectively pry into the nature of prejudice and self-fulfillment.