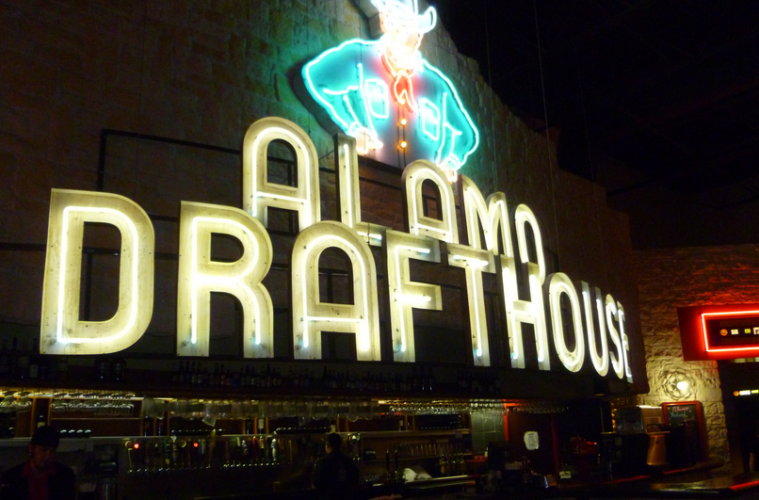 The finest theatrical experience one can have is coming to our homebase, aka The Big Apple. Stationed in Austin, Texas the Alamo Drafthouse has been the forefront of theatergoing, with their strict no cell phone and talking policy during films, as well as excellent food and beverage service. That doesn’t even begin to get into their classy programming line-up and other events.

They’ve now announced plans to move to the Upper West Side of Manhattan, at 2626 Broadway and 99th street, or as you may better recognize, the former Metro Theater. This is only the beginning of their domination, will other plans to move into San Francisco, Colorado and Virginia. As for NYC, the hope is to get it launched next year and they’re already accepting applications for managers, kitchen staff, creative programmers, bartenders and waiters.

Strap in fellow NYC folks, this is going to be a fun one. Check out the press release below, after a photo of the old Metro which was set to be turned into an Urban Outfitters before Tim League stepped in. On behalf of every cinephile, thank you. Austin, TX— Thursday, April 5, 2012—Alamo Drafthouse Cinema is pleased to unveil its plans for its first location in New York. The five-screen Manhattan-area theater will be owned and operated by Alamo Drafthouse and located on the Upper West Side, occupying the former Metro Theater at 2626 Broadway.

“My often-stated top priority for the Alamo Drafthouse has been to open a venue in New York,” said Alamo founder and CEO Tim League. “When we discovered the availability of the historic Metro theater, we immediately knew we had found the perfect location for our new Manhattan home.”

The venue will feature five screens of new releases, repertory programming and the Alamo’s unique signature programming. Like all Alamo Drafthouse theaters, the Alamo Drafthouse at the Metro will provide food and drink service to your seat and will uphold its famously strict no-talking policy. The new theater is currently scheduled to open in 2013.

About Alamo Drafthouse
The Alamo Drafthouse is a lifestyle entertainment brand with an acclaimed cinema-eatery, the largest genre film festival in the United States and a collectible art store. Named “the best theater ever” by Time Magazine, the Alamo Drafthouse Cinema has built a reputation as a movie lover’s oasis not only by combining food and drink service with the movie-going experience, but also introducing unique programming and high-profile, star studded special events. Alamo Drafthouse Founder & CEO, Tim League, created Fantastic Fest, a world renowned film festival dubbed “The Geek Telluride” by Variety. Fantastic Fest showcases eight days of offbeat cinema from independents, international filmmakers and major Hollywood studios. The Alamo Drafthouse’s collectible art boutique, Mondo, offers breathtaking, original products featuring designs from world-famous artists based on licenses for popular TV and Movie properties including Star Wars, Star Trek & Universal Monsters. The Alamo Drafthouse Cinema is expanding its brand in new and exciting ways, including the launch of Drafthouse Films, a new film distribution label and plans to extend its theaters and unique programming philosophy to additional markets across the United States. More information about Alamo Drafthouse franchise opportunities are available on the official website http://drafthouse.com/.