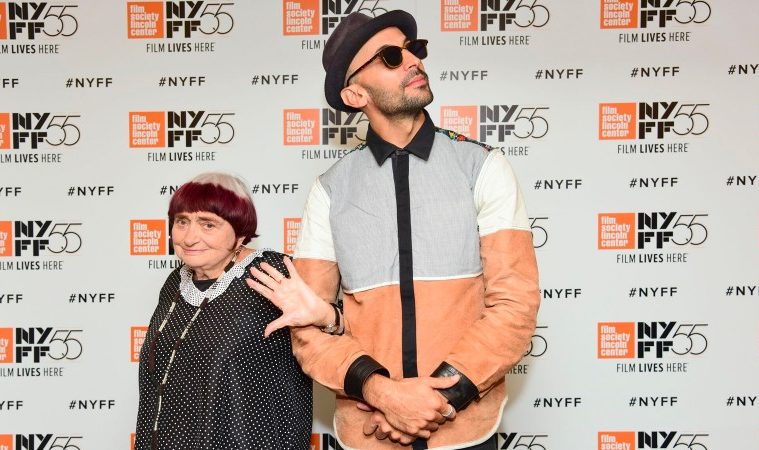 Agnès Varda and JR on Friendship, Life, and the Communicative Power of Cinema

“We kind of like each other… It’s hard every day — I’m counting the hours and the minutes but we are under contract so we have no choice,” the bespectacled JR jokes about his friendship with legendary French director Agnès Varda, who quickly fires back, “When do we stop the contract?”

Immediately upon entering the room, before questions are even on the table, the friendship between Agnès Varda and JR is clear; they tease each other about their contractual friendliness lasting only the publicity campaign and the two years of shooting — they’re on that level already.

Varda gives up the joke fairly quickly: “The thing is, we could work together because we have the same way of appreciating people. I’m curious about people and [JR] is, and so when we meet people it becomes easy to start a conversation. It’s not a Q&A. It’s also about what we can share about our own lives. We try to establish something so that we’re not quite stealing something from other people’s lives.”

Their friendship originates from a place of mutual respect, JR explains in discussing how they met in the first place: “Rosalie, the daughter of Agnes and also the producer of the film, realized that we had a lot in common but had never met. Agnes had books of mine, and she wrote me, and of course I had seen her films and so I took my bike and went to her house and had tea and pastries. I left, and the next day she came back to my studio — it was really like an arranged meeting, like trying to marry off an old cousin, except that we had already known of each other.”

The conversation shifts to incorporate the film, and its humanist approach to the working class. They recall a variety of their subjects, discussing their lives in great detail. “The farmer that takes care of the land runs a sort of small company. He used to run a lot of people, but the machines took over and now he is by himself, alone with hectares and hectares,” JR starts before Varda finishes, “instead of having friends he has his computer. We wanted to share that because we still have in mind the concept of farmers doing things with their hands, but he said that he no longer touches tools. We were learning through making the film, discovering the things of today with the spirit of the past.” They recall Jeannie, a local bartender whom they pasted on the side of a house with an old parasol, and the path to which they discovered her, after two other locals on neighboring streets refused to talk to them, among many other members of the working class included in the film. “We completely let the film be dictated by chance,” JR starts, before Varda interrupts: “Preorganized, so that chance could help us.”

The aloofness of the structure eludes a lack of preorganization, and JR clarifies: “Agnes being very, very curious, we constantly asked everybody what they do, and got them involved in the film. We would stop and talk and question…” In continuing to share scenes founded on coincidence without being prompted to — their shared connections to the beach at Calais; their sheer luck in visiting the dock at Le Havre while its workers were on strike, so that they could borrow equipment and workers — the pair fill the room with a magnificent sort of energy — palpable, sincere.

Varda declares her love for that lucky scene at Le Havre, in which the wives of the dock workers become part of the artistic process, and furthermore explains the aloofness of structure:  “Comment ca-va Lego?” before continuing, “It was such a big production, building from the bottom up so that the women could feel proud. I love that scene because it started from just saying “let’s meet your wives!” and that built and ended up with them in the boxes where their hearts would have been. This is really documentary — inventing a way to put people in light, listening to what they feel or what they say. We could have done more — we could have done half an hour. Everywhere, we could’ve done half an hour — we had enough material. We chose to go lightly, because we didn’t want a sociological thesis.” With this being said, Varda continues to champion more casual audiences. “The people who pay ten, twelve dollars don’t want to get bored, they don’t want to listen — they want to meet people. So we travel between being very serious about the subject and making it light with asides, including some of our little jokes.”

Varda deflects a question about the state of politics with a sentence on Donald Trump’s irrevocable influence on the world, before speaking on cinema as a whole instead: “I think cinema should exist regardless of whatever is happening because cinema is a very good tool for communication. The world is so shitty in terms of who is free and who is not. We should decide that cinema is a language to make links with people who are interested. It is about sharing, with no violence, no guns, no suspense — nothing that is supposed to make cinema work, that will bring money to the producers. We would love the film to be successful but that is not our aim… It has nothing to do with heavy entertainment or even good entertainment. I picked up a paper and the two films you can see are Blade Runner and Faces Places. We are in another category in terms of budget, and our aim is really to just meet people and touch audiences. I’ve done this all my life, and I’m still working on it. What JR does as a street artist is similar: to meet people and put them together.” She describes JR’s most recent project, in which he put a photo of a child over the Mexican border.

At one point, JR breaks off from the conversation and begins to film Varda (“I love recording you talk! I will watch it before I go to bed!”) to which she goes off: “Don’t you have anything better to do!” I take my phone out to take a picture of JR recording Varda, who, in turn, looks at me and shakes her head jokingly. I inquire about the more personal sequences, in which the camera is pointed inwards at the directors rather than outwards towards others, and how she finds her balance between her own life and the lives of others. Varda simply rebuts: “It is part of life!”

Faces Places is now in limited release and expanding.