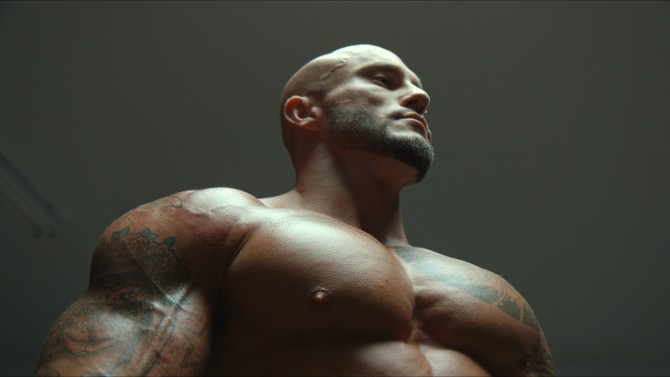 Locarno Review: Denis Côté Entrances, But Never Quite Cuts Below the Surface in ‘A Skin So Soft’

There is a problem with A Skin So Soft and it goes somewhat deeper than the very thing that that title so poetically calls to mind. The work of Canadian filmmaker Denis Côté could, without great effort, be organized into two distinct types: narrative dramas that focus on human relationships under duress and hyper-real, video installation-styled documentaries (Bestaire, Joy of Man’s Desiring). His latest is of the latter variety, a slightly surreal anthropological study of one of mankind’s oddest subcultures: bodybuilding or, perhaps more accurately in this case, male bodybuilding. That’s all well and good. The troublesome part is that instead of taking the familiar and subverting it — as in his previous documentaries — A Skin So Soft takes an already alien world and dehumanizes it further. However, if audiences can forgive that — and that might be a big ask for some, not to mention a little unsympathetic — then Côté’s film does work very well for the most part as a somewhat cold, ornamental study of what our epidermal tissue looks like at terminal mass.

François Messier-Rheault’s camera gorges over the ripped abs, pecs, quads (and so on) of a selection of jacked up young men as they go about their daily routines in the lead up to a national body-building competition. We observe (and that is certainly the correct verb) the men’s training schedules; dietary sacrifices; and awkwardness around others. The resulting mood is compelling in its absurdity but it’s difficult to shake the feeling that a lot of what’s being put before us is a construct from the editing room as apposed to being in any way related to the reality of these men’s lives. This is how Côté works you might be thinking — and you might be in the right — but there is something unsettling about the level of directorial license being taken just the same.

Outside of this core group are a couple of outliers; an older gentlemen, semi-retired it would seem, now working as some sort of self help guru and training young contenders; the other is a professional wrestler, apparently of Nordic extraction, who competes in strong man challenges on the side (dragging trucks, flipping large tires, that sort of thing). It all becomes strangely hypnotic.

The director goes big for the final act, sending his disparate subjects (who are presumably aware of one another professionally but, as far as we can see, not yet personally acquainted) to some sort of rural retreat. At this point, any lingering sense that the viewer is being asked to observe three-dimensional human beings as opposed to wild animals goes out the window. In one absurd sequence, Côté films the men feeding carrots to sheep on an idyllic prairie and, later on, shoots them in suggestive close-ups as they admire each other’s physiques in the glistening sunlight (a scene that comes across as a rather weak perhaps even careless attempt at homo-eroticism).

There is a touch of Riefenstahl to all this. One of the human specimen’s trainers even goes so far as to call him “Mr. Olympia” to boost his confidence before a show (whether or not said trainer is aware of Ms. Riefenstahl’s work is difficult to tell). I don’t mean to deride the film (or suggest anything else for that matter) with that comparison — indeed, the German filmmaker had the ability to photograph the human body in ways that had never been seen before — but it might go someway to explaining the lack of humanity on show here, on either side of the camera, and that’s a shame as there are a number of shots that hint at something much more. Early on we see J.D., the largest of the men, in a personal moment as he chooses what t-shirt to wear that day. It’s a brief moment of vulnerability for the affable giant and it might just make you want to know more about the man, who he is, what drives him, what he dreams, etc. The problem with A Skin So Soft might be the fact that it never takes the time to ask, “Why?”