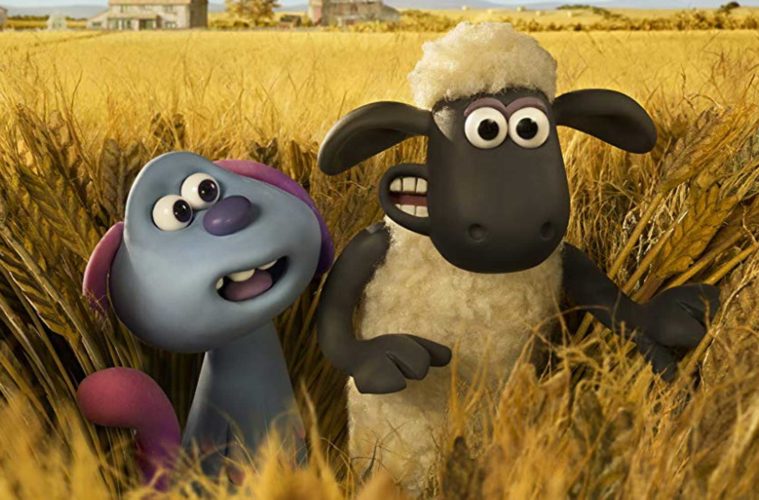 In the summer of 2015, Mad Max: Fury Road wasn’t the only nearly dialogue-free cinematic spectacle that showed how a total command of visual language within a fairly straightforward narrative structure could result in one of the best films of the year. There was also Shaun the Sheep Movie, coming from the immensely talented folks at Aardman Animations and arriving in the United States about six months following a debut in their home country of the United Kingdom. Five years later and they’re now back with the sequel, A Shaun the Sheep Movie: Farmageddon, which once again has a delayed release here, coming four months later and, this time, straight to Netflix. Embracing the sci-fi genre, they take out the world-saving doom and frightful creature effects this breed of films is known for, and instead deliver a light, cuddly adventure that’s a step below its predecessor in shear (sorry!) inventiveness but still containing a wealth of delightful comedic gags.

One need not see the first film to pick up on the story here (though, if you haven’t, close this tab immediately hit play) as we return to the quaint town of Mossingham and the playfully anarchic antics of Mossy Bottom Farm. Shaun and his flock is once again up to no shortage of tomfoolery as they find endless ways to cause terror for Bitzer the dog, who aims to appease the Farmer at all costs. Something’s amiss, however, when a UFO lands nearby, causing another Famer and his dog to report the sighting. While the opening, which finds an extraterrestrial creature named Lu-La now on the loose, is clearly drawing from E.T. the Extra-Terrestrial, it is far from the only cinematic reference we get peppered throughout the film. There are nods to 2001: A Space Odyssey and Jaws, each coupled with entertainingly silly visual gags, as well as Alien, Invasion of the Body Snatchers, Close Encounters of The Third Kind, and even a humorous call-out to the famous photo “Lunch atop a Skyscraper.” These frequent callbacks to the greats of the genre mean this outing isn’t quite as wholly imaginative, but thankfully the references never fall into gimmicky territory where they are simply repeating what came before.

As Lu-La makes her way to Mossy Bottom Farm and finds a friend in Shaun, we learn her abilities include replicating any behavior she sees, turning caterpillars to butterflies in an instant, and controlling objects with the immense power of her glowing ears. The hijinks that ensue, realized by directors Will Becher and Richard Phelan in their feature debut, are the standard fish out of water variety but the execution is impeccable, from a mining everything possible in the destruction of a grocery store to causing unparalleled chaos for Blitzer and the Farmer when it comes to messing with the equipment they rely on. As the government sweeps in to zero in on Lu-La, there’s also at least one brilliant workplace-related visual gag that is worth the price of a ticket–or rather an automatic monthly payment on your credit card bill to Netflix.

One decision that’s difficult to wrap one’s head around is the reliance on pop songs lathered over playful montages. Aside from the intelligible mumbles of our characters, this is a film that once again has power in its dialogue-free approach, harkening back to a Keaton-esque silent film flair for body (er, animal) movement and well-timed reactions. So, the decision to include these radio-friendly singles that may cause kids to perk up feels disingenuous to the essence of what makes these films work so well. There’s also a villainous turn that feels a bit familiar as it goes for some emotional catharsis in a way that’s been done better in other animations.

However, when comparing the majority of A Shaun the Sheep Movie: Farmageddon to the other side of the pond in terms of its approach to storytelling, it feels like a godsend. In a Hollywood mostly obsessed with “live-action” animated retreads, Minions, and needless sequels, here is an animation that trusts its audience to follow the action when no words are guiding it, and don’t be surprised if a continuous smile is sustained from the first moments. Clocking in at just a touch over 75 minutes excluding credits (note: don’t skip out on an amusing mid-credits sequence), it is starting to feel like these characters may be better suited for more frequent, recurring adventures in a slightly more compact fashion. So, the recent news that we’ll be seeing the wooly gang return next year in a half-hour Christmas special is further proof that Aardman knows the best step forward. Long live Shaun, the sheep, and everyone that resides in Mossingham.

A Shaun the Sheep Movie: Farmageddon arrives on Netflix on Friday, February 14.