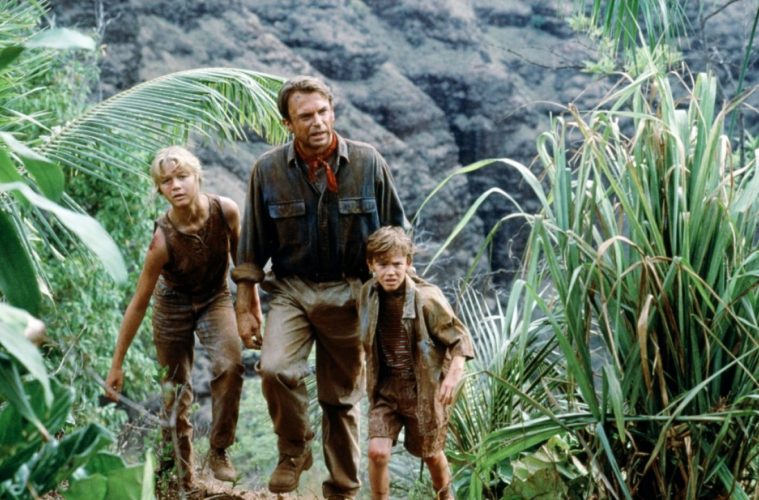 Depending on where you reside, the moment is rare when one can experience a beloved film on the big screen for the first time, and I’m indebted to Universal for theatrically re-releasing an all-time favorite, Jurassic Park. Perhaps it is under the guise of it being converted into 3D, but we’ll take what we can get. This is one of Stephen Spielberg’s most-seen films and twenty years later, it still manages to amaze, offering dinosaurs on the big screen in a way that is entirely believable. Here is the culmination of costume work, animatronics and the emergence of CGI — a mere baby in the cinema world of 1993. To this day, the film plays as well as one could hope. Who needs a reboot, remake, or redo when we have something this well-made and future proof? Take note, Hollywood.

Before we dive too far into the film itself, let’s focus on what has brought Jurassic Park onto the big screen again: the addition of another dimension. The film was obviously not shot with 3D in mind and nothing is intentionally thrown at the screen (unless you count that lamb chop falling on the sunroof of JP tour vehicle). Yet there is plenty of depth to have fun with, considering Spielberg and his crew shot on a real set instead of in front of green screens. As T-Rex and some of the raptor sequences feature actual, physical objects, this pays dividends for not only when you enhance the film in HD, but also when you are trying to get a reference point for what should pop. After the initial opening sequence, however, the 3D effect becomes quite seamless (or rather, unnecessary) and one can give or take the post-conversion. Perhaps this is a testament to the quality of the film itself. Once the ride begins, it never lets up, no matter the number of dimensions. The dialogue here pops, even to this day. If Jeff Goldblum’s character, the chaos theorist Dr. Ian Malcolm, were real, you’d expect him to appear on Leno and Letterman every six months showcasing nothing but his ideas and stories. The discussion of doing things simply because you can, without the careful thought and caution of what it may do to the human race, is poignant now more than ever. There’s a lesson here: that humans are given great power but rarely think about how we wield it. Michael Crichton’s classic novel remains a cautionary tale of science fiction and the idea of dreams becoming a terribly uncontrollable reality. Revisiting this film, one recalls that utterly perfect John Williams score. Whether it is the ’90s-fueled industrial music that we are introduced to as the raptor pen is lowered, or the orchestral score that accompanies both the helicopter ride into Isla Nublar and the wondrous introduction the Brachiosaurus, each piece of music is unforgettably engrained into the experience.

Whether it is the jokes, the special effects, or the score, with over 20 years between the original release and now, it is incredible how ageless the film remains. Sure, the film does show some of its wrinkles at times. Hammond’s grandchildren, Lex and Tim, are ecstatic over the CD-ROM that’s included in the tour vehicles; there are those tiny-looking Ford Explorers compared to the monsters of today; and the computers and their MS-DOS command prompts make one laugh with fondness. Few films will be future proof when dealing with the trappings of technology, but this is a celebration of things done right.

It’s easy to marvel how Spielberg gives every character a key, iconic moment, something all too rare in today’s blockbuster world. The compact cast helps, but this is also due to Crichton and David Koepp‘s impeccable script. We see Dr. Grant grow to enjoy the presence of Lex and Tim, and we even witness how swept off their feet both Dr. Grant and Dr. Ellie Sattler (Laura Dern) are at first. But they slowly realize how dangerous all of this is. When they are eating after the raptor feeding, you begin to get the sense that they aren’t simply gung-ho about Hammond bringing back these creatures that were wiped off the face of the Earth millions of years ago. This is the rare film that is nearly as smart as it is entertaining. Grandiose is an apt way to describe Jurassic Park, and Hammond’s boast that “we’ve spared no expense” is perfectly in line with what the film stands for — what a forgotten joy it is to see filmmakers take that idea and run with it.

Are you planning to see the film in theaters?