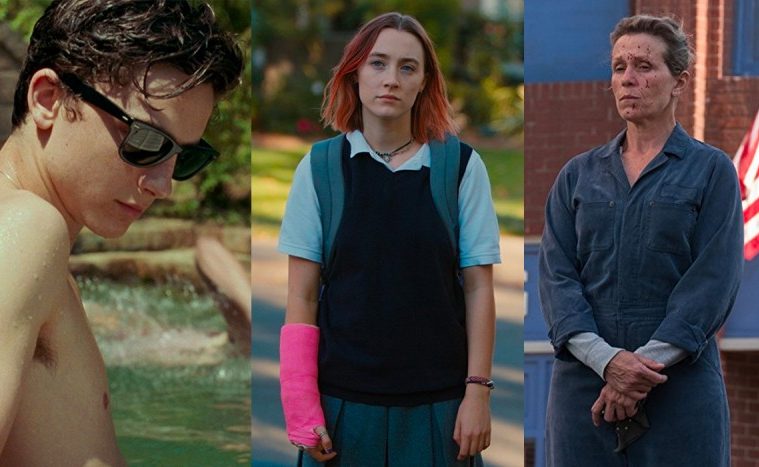 15 Films to See in November

With only two months left to go in the year, we recently rounded up where you can stream the best films of 2017. Now, it’s time to turn to the theatrical options (and a few others). This month brings a handful of festival favorites from as far back as January finally releasing, plus a few blockbusters, and much more. It should be noted that Sony Pictures Classics will be giving a one-week qualifying run to A Fantastic Woman starting Nov. 17, but we’ll return to that when it gets a proper release next February.

Synopsis: Imprisoned, the mighty Thor finds himself in a lethal gladiatorial contest against the Hulk, his former ally. Thor must fight for survival and race against time to prevent the all-powerful Hela from destroying his home and the Asgardian civilization.

Why You Should See It: It’s become almost obligatory for this 15th slot to be reserved for a blockbuster I’m mildly interested in (if there’s one that pops up) and so this month a threequel to Thor gets those honors. While the first two films in the series are among the most forgettable of the MCU, Taika Waititi’s involvement has me hopeful that he can inject some of his personality across the amiable ensemble at his disposal. According to our review, that’s the case.

Synopsis: A behind-the-scenes look at how Jim Carrey adopted the persona of idiosyncratic comedian Andy Kaufman on the set of Man on the Moon.

Why You Should See It: Man on the Moon was released nearly two decades ago, but for the first time, behind-the-scenes of footage of Jim Carrey’s transformation–both performative and physical–will be seen thanks to a new documentary from American Movie director Chris Smith. Set for a Netflix bow in just a few weeks, it can also be seen by all quite soon.

13. Blade of the Immortal (Takashi Miike)

Why You Should See It: Premiering at Cannes this year, Takashi Miike brought his (100th!) new film Blade of the Immortal, a jidaigeki (period drama) action film based on the manga series by Hiroaki Samura. Featuring a wild ensemble of characters and slick-looking action, it’s looking like the ideal alternative from prestige fare this fall.

Synopsis: A woman begins to fall in love, only to discover that she has fantastic powers.

Why You Should See It: With only a few films under his belt, Joachim Trier is one of the most promising directors working today. While he’s a little out of his element with his supernatural lesbian thriller Thelma, as our review attests, there’s enough compelling imagery here to make it worth a recommendation.

Synopsis: A chilling portrait of an undocumented young woman’s struggle for survival as she finds redemption from a tortured past in a dangerous game.

Why You Should See It: Winner of the top prize at South by Southwest Film Festival earlier this year, we said in our review, “What makes Most Beautiful Island standout, however, is that it isn’t just about desperation. Whether Luciana survives the night pales in comparison to whether she can gain power in the process by peering behind the curtain of paradise’s lie. When you have nothing to lose, why not use your oppressors’ vices to your advantage?”

Synopsis: Denzel Washington stars as Roman Israel, a driven, idealistic defense attorney who, through a tumultuous series of events, finds himself in a crisis that leads to extreme action.

Why You Should See It: Even thought we liked Nightcrawler‘s Dan Gilroy’s new film Roman J. Israel, Esq. at its TIFF premiere, the overall response was underwhelming, which caused the writer-director to significantly re-edit it. It remains to be seen whether the cuts made it stronger, but we said in our review of the original version, “Roman J. Israel, Esq. defies expectations at every turn. It stars Denzel Washington, but this is not the suave, in-control character the actor’s known for. Instead, the title character is a socially awkward, anachronistically dressed misfit. It’s a legal drama, but eschews the epic courtroom scenes and shocking turns that are the genre’s hallmarks. Israel is the anti-Michael Clayton.”

Synopsis: Aspiring musician Miguel teams up with charming trickster Hector on an extraordinary journey through the Land of the Dead.

Why You Should See It: While it’s not the first Pixar movie this year — we don’t blame you if you had to Google what the other one was — Coco is certainly the most promising. Marking the return of Toy Story 3 direct Lee Unkrich, who has co-directed with Adrian Molina, a story artist behind Monsters University, their latest follows a boy’s journey between two worlds. With the film already getting high praise with its bow in Mexico, hopefully it can save us from the dearth of quality studio animation this year.

Synopsis: Thirty years after they served together in Vietnam, a former Navy Corpsman Larry “Doc” Shepherd re-unites with his old buddies, former Marines Sal Nealon and Reverend Richard Mueller, to bury his son, a young Marine killed in the Iraq War.

Why You Should See It: No, Richard Linklater’s doesn’t reach the heights of the Before trilogy, Boyhood, or even the amiability of his last film, Everybody Wants Some!!, but there’s still plenty to admire in his sequel to Hal Ashby’s The Last Detail. Although Bryan Cranston pushes a little too hard into his Jack Nicholson imitation, Steve Carell delivers a tender performance that is the emotional backbone of the drama. Check out our review from NYFF.

Synopsis: In this classically styled comedy of manners set in Los Angeles, sophisticated thirtysomethings try to determine whether ideal happiness exists in coupledom or if the perfectly suited couple is actually just an urban myth.

Why You Should See It: One of my favorite discoveries at this year’s Sundance Film Festival was Michelle Morgan’s It Happened in L.A. (then going by the SEO-unfriendly title L.A. Times). As writer, director, and star, her voice was among the most unique I saw at the festival, mixing Whit Stillman’s sensibilities with a Wes Anderson-esque visual approach to deliver a sweet, distinct romantic comedy.  “In an age where the modus operandi of love-seeking is ever-changing, a film can feel immediately dated on its journey from script to screen, yet Morgan’s voice feels like one of the freshest on this particular topic in some time,” I said in my review. “Eschewing the insufferable nature of the bulk of today’s romantic comedies, It Happened in L.A. stands apart with striking style in its self-aware shallowness.”

Synopsis: Two men return home from World War II to work on a farm in rural Mississippi, where they struggle to deal with racism and adjusting to life after war.

Why You Should See It: Expanding her narrative scope but still retaining a level of aesthetic intimacy, Dee Rees’ Pariah follow-up Mudbound has the old-fashioned storytelling feel of a grand American novel. Based on Hillary Jordan’s 2008 book, the story takes place during World War II, and while it shows glimpses of the horrors of war, its larger aim is concerned with the racial divide of two families in the American south. Shifting point-of-views result in the drama taking a bit to find its footing, but after the groundwork is set, Rees is able to burrow deeper into the injustices — both piercingly subtle and horrifyingly grotesque — to create a powerful exploration of cyclical racism, with a touch of hope. Read my full review.

Synopsis: In this darkly comic drama, a mother personally challenges the local authorities to solve her daughter’s murder, when they fail to catch the culprit.

Why You Should See It: After Martin McDonagh’s messy but no less hilarious Seven Psychopaths, he returns with a more focused, biting dark comedy, Three Billboards Outside Ebbing, Missouri. Featuring some of the best work Frances McDormand and Sam Rockwell have done, we said in our review, “McDonagh’s latest work is simply exceptional; a film so rich with narrative fluidity, profane laughs, standout performances and complex character studies that its tremendous emotional hits–often arriving when you least expect them–might just leave you agog.”

Synopsis: An actress wanders around a seaside town, pondering her relationship with a married man.

Why You Should See It: God bless Cinema Guild. They’ve picked up the three newest film from Hong Sang-soo and the first out of the gate here in the U.S. is his Berlinale winner. We said in full review, “On the Beach at Night Alone, a bittersweet tone poem from South Korean writer-director Hong Sang-soo, thinks many a thought about the universe and the future, mostly expressed through nature and the characters’ anxieties about growing old. It’s the 18th feature from the prolific master filmmaker, and one that ponders in the macro while still following the archetypal blueprinted micro we’ve come to expect.”

Synopsis: Marion McPherson, a California nurse, works tirelessly to keep her family afloat after her husband loses his job. She also maintains a turbulent bond with a teenage daughter who is just like her — loving, strong-willed and deeply opinionated.

Why You Should See It: With its rapid-fire pace, one might think Lady Bird doesn’t leave room for reflection, but it’s a minor miracle just how remarkably Greta Gerwig is able to weave together energy and emotion. “Lady Bird is one of the year’s great joys. Greta Gerwig’s debut as a solo writer-director is so wise, so funny, and so remarkably assured that it seems to have flown in out of nowhere,” we said in our review.

Synopsis: Eager to escape life with her depressive single father, 16-year-old athlete Cyd Loughlin visits her novelist aunt in Chicago over the summer. While there, she falls for a girl in the neighborhood, even as she and her aunt gently challenge each other in the realms of sex and spirit.

Why You Should See It: There are few directors working today that love their characters more than Stephen Cone. After reaching a wider audience with one of 2015’s best films, Henry Gamble’s Birthday Party, he’s returning this year with Princess Cyd.  In a rare A-grade review, we said, “Watching his films, one gets a sense that he doesn’t use the medium simply to tell stories but to exercise his curiosity and discover the things that make us human.”

Synopsis: In 1983, the son of an American professor is enamored by the graduate student who comes to study and live with his family in their northern Italian home. Together, they share an unforgettable summer full of music, food, and romance that will forever change them.

Why You Should See It: The warmth of Call Me by Your Name, in both its mise-en-scène and the script’s humanity, is something I’ve been looking to return to since seeing it at Sundance over 10 months ago. Finally, it’s now set for a release this month. “Luca Guadagnino’s disarmingly nice and intoxicatingly sexy film is an extraordinary queer romance, one that evocatively explores the body and mind’s surrender to lust and love,” I said in my review.