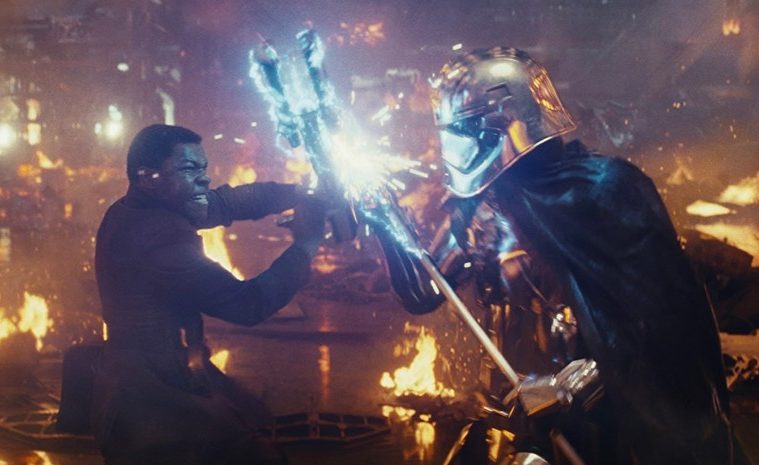 The various year-end lists from different groups might make you think 2017 is over, but look at the calendar and, lo, there’s an entire month left in which films will be released. Arriving in December is our most-anticipated picture of the year, sci-fi tales from both Lucasfilm and Alexander Payne, a movie about making the worst movie, and much more.

Synopsis: A social satire in which a guy realizes he would have a better life if he were to shrink himself.

Why You Should See It: It might be his least-well-received film thus far, but the prospect of Alexander Payne taking on a high-concept sci-fi film is enough to pique interest. Of course, Valerian this is not. Rather, the story finds Payne returning to more human-focused drama. We said in our review, “So dense is this film with ideas and wonderful sight gags (as an admirer of Buster Keaton, Payne has always had an eye for physical comedy) that the roving plotline can run away from one at times.”

Synopsis: In 1892, a legendary Army captain reluctantly agrees to escort a Cheyenne chief and his family through dangerous territory.

Why You Should See It: Hostiles finds Scott Cooper re-teaming with his Out of the Furnace star Christian Bale and heading out west. Premiering to a strong response, it was then picked up by the fledgling Entertainment Studios Motion Pictures and it’ll arrive in time for an awards campaign with a December release. With gorgeous cinematography from Masanobu Takayanagi (who worked on Cooper’s last two films as well as Spotlight and The Grey), it also stars Rosamund Pike, Wes Studi, Adam Beach, Ben Foster, Jesse Plemons, Rory Cochrane, and Q’orianka Kilcher.

Synopsis: The true story of Molly Bloom, an Olympic-class skier who ran the world’s most exclusive high-stakes poker game and became an FBI target.

Why You Should See It: There are only a few writers in Hollywood one can recognize within a single scene. Aaron Sorkin certainly falls under that category, and after winning Oscars and Emmys for his work, ranging from The Social Network to The West Wing, he’s made his directorial debut. Featuring strong performances from the entire cast — including Jessica Chastain, Idris Elba, Kevin Costner, Michael Cera, Chris O’Dowd, and Bill Camp — Christopher Schobert nails it his review, saying, “Molly’s Game is slick, flashy, highly entertaining, and hugely forgettable.”

Synopsis: An intimate documentary that captures eight years in the life of an African- American family living in North Philadelphia.

Why You Should See It: A documentary highlight at this year’s Sundance. We said in our review, “A portrait of one working class family living in north Philly over the course of nearly a decade, Jonathan Olshefski’s debut, Quest, strives to demonstrate the power and inner workings of an engaged community through the perspective of the Rainey family, but the documentary’s framing device is both its greatest success and biggest failure, giving the film a scattershot focus despite its ambitions. Quest couldn’t be more relevant to national conversations about poverty and gun violence in its empathy for marginalized communities, and boots-on-the-ground understanding of the effects of shootings, but as a whole, it lacks the context to be able to effectively communicate the scope of these problems beyond a personal level.”

Synopsis: The story of the kidnapping of 16-year-old John Paul Getty III and the desperate attempt by his devoted mother to convince his billionaire grandfather Jean Paul Getty to pay the ransom.

Why You Should See It: Judging by the new trailer, it seems as though Ridley Scott and crew are humming along as they put the finishing touches on their new vision of All the Money in the World, now featuring 100% more Christopher Plummer, and will still make its release in just a few weeks. Controversy aside, we’ve been hoping Scott would narrow his scope after a few mega-sized epics, and this true story looks to have the dramatic weight to make an impression, particularly thanks to the talents of the always-great Michelle Williams.

Synopsis: A drama about a family set in Calais with the European refugee crisis as the backdrop.

Why You Should See It: Christmas just got a little warmer: Michael Haneke’s newest film, Happy End, will arrive just in time for a holiday family outing if you’re in NY or LA. Starring Isabelle Huppert, Jean-Louis Trintignant, Mathieu Kassovitz, Fantine Harduin, Franz Rogowski, Laura Verlinden, and Toby Jones, we said in our review, “Lest anyone should suspect the redoubtable Austrian of growing soft, before the opening credits of Happy End have even finished rolling, a twelve-year-old has already killed her hamster and poisoned her mom, all of which she records and sarcastically comments on with a Snapchat-like app.”

Synopsis: Katja’s life collapses after the death of her husband and son in a bomb attack. After a time of mourning and injustice, Katja seeks revenge.

Why You Should See It: A blunt-force drama, Fatih Akin’s terrorism revenge thriller provides Diane Kruger with one of her best roles as a hard-edged, but vulnerable woman whose husband and son were brutally killed by neo-Nazis. What follows is a procedural-meets-thriller that can feel on the nose, no less effective. We said in our review, “Fatih Akin sends a cumbersome bull into the socio-political china shop of present-day Germany, and all its racial and social divides, with In the Fade, a compelling (if somewhat ugly and hammy) contemporary revenge thriller wherein fear begets fear, hates begets hate, and thrills — however imprudent they might be — are easy to come by.”

Synopsis: An other-worldly fairy tale, set against the backdrop of Cold War era America circa 1962. In the hidden high-security government laboratory where she works, lonely Elisa (Sally Hawkins) is trapped in a life of isolation. Elisa’s life is changed forever when she and co-worker Zelda (Octavia Spencer) discover a secret classified experiment.

Why You Should See It: Guillermo del Toro’s Cold War era fantasy has the feeling of being swirled around in a Bioshock-esque snowglobe, for all the good and bad that entails. Worth seeing for its extravagant craft, it’s not quite as inventive on narrative end, embracing classical archetypes a little too heavily. We said in our review, “There have been a number of filmmakers over the years (Lynch springs to mind) that have shown audiences that dreams and nightmares are only separated by the finest of lines, but only Del Toro appears to have the ability to skip along that knife edge and, when he is truly at his very best, turn that skip into a dance.”

Synopsis: In a patriarchal society, an ordinary Georgian family lives with three generations under one roof. All are shocked when 52-year-old Manana decides to move out from her parents’ home and live alone. Without her family and her husband, a journey into the unknown begins.

Why You Should See It: One of the better dramas I saw at Sundance, this tale of separation was overlooked then and sadly seems to be getting no push from Netflix, who will release it this Friday. Nonetheless, thankfully it will be easily viewable, and we highly recommend doing so. “This evocation of space and atmosphere is the greatest strength of My Happy Family. Despite tracking a narrative that could be dismissed as being too familiar – a middle-aged woman finally finds happiness – the film manages a level of specificity and honesty that makes it feel like a truly original story, rather than a riff on an archetype,” we said in our review.

Synopsis: Competitive ice skater Tonya Harding rises amongst the ranks at the U.S. Figure Skating Championships, but her future in the activity is thrown into doubt when her ex-husband intervenes.

Why You Should See It: In one of the most varied filmographies of this century those far, Craig Gillespie made a splash with Lars and the Real Girl and has since followed it with everything from old-fashioned epics (The Finest Hours) to commendable remakes (Fright Night). His latest, which plays like a David O. Russell film that actually has something to say, tells the story of an abused woman who become a target for the world’s conversation fodder. Powered by a Margot Robbie performance that is venomous as it is heartfelt, we said in our review, “Having proven time and time again that she is more than worthy and capable of supporting a feature on her own. I, Tonya (finally) grants Margot Robbie the opportunity to delve headfirst into a role that not only offers top billing, but showcases the emotional complexity and riotous charisma we all know she possesses; with the narrative chutzpah to back it up.”

Synopsis: When Greg Sestero, an aspiring film actor, meets the weird and mysterious Tommy Wiseau in an acting class, they form a unique friendship and travel to Hollywood to make their dreams come true.

Why You Should See It: It’s only fitting the director who ambitiously took on William Faulkner and Cormac McCarthy would see the most acclaim behind (and perhaps in front of) the camera by scraping the bottom of the barrel: Tommy Wiseau and the creation of his cult “classic” The Room. “In depicting its creation with The Disaster Artist, a love letter to bad cinema, James Franco has now created Ed Wood for the 21st century,” we said in our review.

Synopsis: Having taken her first steps into the Jedi world, Rey joins Luke Skywalker on an adventure with Leia, Finn and Poe that unlocks mysteries of the Force and secrets of the past.

Why You Should See It: You will see this anyway, so there’s no amount of convincing that should be made. Perhaps against better judgement, my greatest desire is that it will play much more like a Rian Johnson-helmed Star Wars movie than a Lucasfilm-produced sequel to The Force Awakens. Bring on the Porgs.

Why You Should See It: We’ve seen a number of excellent documentaries capture the European refugee crisis, but Finnish director Aki Kaurismäki delivers something wholly unique, full of deep insight and deadpan comedy, with his take. “Hope is as contemporary and vital a film as you’re likely to find in 2017, but it’s also one of the funniest and most classically (not to mention beautifully) cinematic too. Shot on gorgeous 35mm by his enduring cinematographer Timo Salminen, it’s as cleverly detailed, as it is visually stunning and right from the very beginning,” we said in our review.

Synopsis: A cover-up that spanned four U.S. Presidents pushed the country’s first female newspaper publisher and a hard-driving editor to join an unprecedented battle between journalist and government. Inspired by true events.

Why You Should See It: It was recently named the best film of 2017 by the National Board of Review, though most audiences won’t be able to see Steven Spielberg’s timely journalism drama until January; it’ll first get a limited release in a few weeks. Led by a pair of Hollywood’s top stars, Tom Hanks and Meryl Streep, they are backed by an equally impressive, massive ensemble for what looks to be another entry in Spielberg’s recent dramatic streak of noble characters enacting American idealism.

Synopsis: Set in 1950’s London, Reynolds Woodcock is a renowned dressmaker whose fastidious life is disrupted by a young, strong-willed woman, Alma, who becomes his muse and lover.

Why You Should See It: Could it be anything else? I’m embargoed from sharing any thoughts until next week, but I’ll let its place on this list offer some indication.