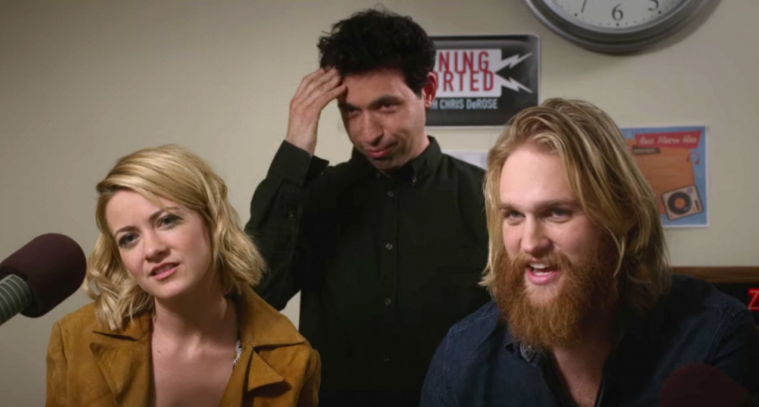 The bond of male friendship is examined – and tested – in Folk Hero & Funny Guy, a short and sweet dramedy from multi-hyphenate Jeff Grace, who writes and directs. We meet comedian Paul (Alex Karpovsky) at the end of a tired stand-up routine in a beer-stained comedy club. Meanwhile, Paul’s childhood friend Jason (Wyatt Russell) has built a successful career for himself as a folk music star. Inspired over the course of a drunken reunion, Jason gets the idea to take Paul on tour with him. We had the opportunity to speak with Russell about the film, and one can read the full conversation below.

How did this all come together?

I came back from doing a film and I just read this movie that I thought was really good. And it had a musical element to it which is something I’d wanting to do. Because I play guitar, and it’s an important thing in my life. For myself. I’ve never done it for anybody else. Or played it for anybody else in a way of going ‘I want this to be a career.’ It was always sort of private but [the movie] was the first time I was like, ‘You know, this could be a cool thing for me to do and challenge myself to be able to play live and sing live.’ You know, there’s no hiding. That appealed to me a lot, so when I met Jeff [Grace], the director, I met someone who totally understood what they had written, had lived with it, and I knew that the movie was in good hands and that whatever performance came out of it was going to be in good hands so it was an easy decision after that.

Yeah, the music is great and certainly one of the highlights of the whole film. As I understand it, you were basically filming live on location, is that right? Sounds like the way you captured it was pretty down and dirty.

Yeah, there was no other way to do it. For that specific thing. Obviously, for bigger projects that calls for more involved things. This was just me and a guitar so. If I wasn’t going to play it would sort of violate the entire movie. So it was never even a question and I knew that Jeff, the minute I met him, that that’s what he wanted so that’s just what we’ll do. We have this guy Wil Masisak, who’s basically just an audio wiz. It was just him, alone, doing all of the audio. Meaning all of the guitar work, all of the levels of the mic and the guitar and all of that. Combined with everybody else’s levels and the room tone and…doing everything by himself. Like he didn’t have an assistant until like the last four days. Booming everything. The guy was like magic. And so having somebody like that, who has an engineering background helps massively with just getting the takes down. Because it could’ve been where you’ve shot the movie and you get the audio back and you’re like ‘what the fuck is wrong with it?!’ So big props to Wil for being able to make that a reality.

And you can definitely feel the naturalism throughout the film. It feels like a very authentic road trip movie. Everybody’s had an experience like this to some degree or another. It sounds like the way it was filmed, what was there to take away from being real indie about your locations, actually being on the road shooting and all of that?

I think it all leads into everything. And the way we lived was like two houses right next to each other. So we were with each other all of the time it was very familiar. Everything bled into everything else. So with a movie like that, I think it kind of has to feel like a summer camp vibe in a weird way because that’s what that level of indie filmmaking is kind of about. So that was something that came organically. And more than anything, I think just everybody being good people. Fun to hang out with. Easy people. People who could take a setback. People who didn’t look at the top of the mountain and go ‘whoa, we’re never going to get there!’ The amount of [location] moves we had to go on a budget of, like, zero dollars was a joke. And what [the production] was able to accomplish with the budget that they had is kind of mind-boggling to me. So all of that pace and all of that stuff added to whatever it is you feel towards the natural-ness on screen.

One great thing throughout is the comedy. There aren’t many joke jokes. Alex [Karpovsky]’s character is a stand-up of course, but the majority of the laughs come from the character relationships and the interactions. When you’re prepping the role and getting to know the other performers, how much of that can you plan for and how much of that just comes to be on set?

I think a lot of those moments comes from everybody’s understanding of humor. And that our humor matched well. Like Jeff makes me laugh so hard. Alex makes me laugh so hard. Meredith [Hagner] makes me laugh so hard. And everybody could make each other really gut-bust laugh. It all came from not concentrating on any type of particular joke and not making any joke precious. But by listening to each other and going, ‘that’s fucking funny! What if we did this?’ And then the humor comes up and it’s not a set-up joke that after a while might get stale. And might not be funny. And the joke might not land. But if you play the humor and you all have killer humor you’re going to be entertaining each other while you’re doing it and that is real.

Last question. What’s on the horizon? I know you’ve got the Ethan Hawke movie Blaze coming up, which seems to have a lot of music in it. What else exciting coming up?
Yeah, [Blaze] was a movie where I went down there for like five or six days and Alia Shawkat was in it as well as Ben Dickey who’s playing [musician] Blaze [Foley]. I play a guy named Glen who they rent a treehouse from. Working for [Ethan Hawke] was amazing. And then I did a movie called Ingrid Goes West that comes out in August, Neon’s distributing that movie. And then tomorrow I get on an airplane to do a movie called Overlord, a Bad Robot movie a guy named Julius Avery is directing and J.J. Abrams is producing.