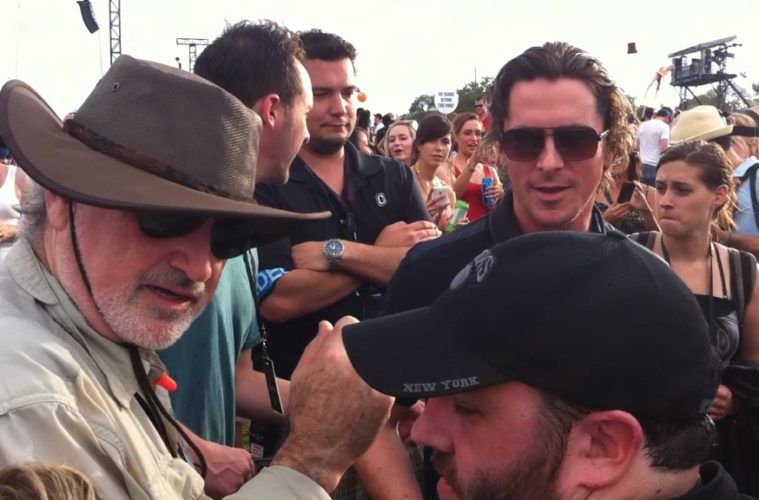 For someone who rarely has a photo of him taken, this weekend has been free-for-all of sorts for director Terrence Malick. We gathered a detailed account of what is going down at Austin City Limits music festival this weekend, including many photos. But now we have video of the reclusive director, most recently behind The Tree of Life, with his camera crew following Christian Bale in a busy crowd for their upcoming film.

There are no details about the plot, but another recent photo below confirms the casting of Haley Bennet. His “darker” biopic take on the rock ‘n’ roll and country star Jerry Lee Lewis is the only one of his previously unproduced projects this could be, but there is no information yet. Check out the Daily Distraction video (via Johnny Garcia) below on this Sunday afternoon, which finds the director in what looks to be a happy mood, not bothered by the busy crowd and Cut Copy playing in the background. I was at ACL today, watching Iron and Wine. We were standing next to the soundstage, where there is a fenced-off area that VIPs and staff use to get access to the sound and camera area. Christian Bale, Haley Bennett, Terrence Malik and several cameramen walked into this fenced-off area and filmed for about 5 minutes. Christian stood very still, staring straight ahead, or at the sky. Haley danced around him waving a long black cloth around. We all thought it was very strange, and took photos. This still looks like test shooting on Bale’s off time with The Dark Knight Rises, but check back for more details as they arrive. Malick’s next film, a romantic drama with Ben Affleck, Rachel McAdams and Javier Bardem is planned to arrive next year while The Tree of Life hits Blu-ray on October 11th, 2011.

What do you make of one of the only videos capturing Malick? What about this project?