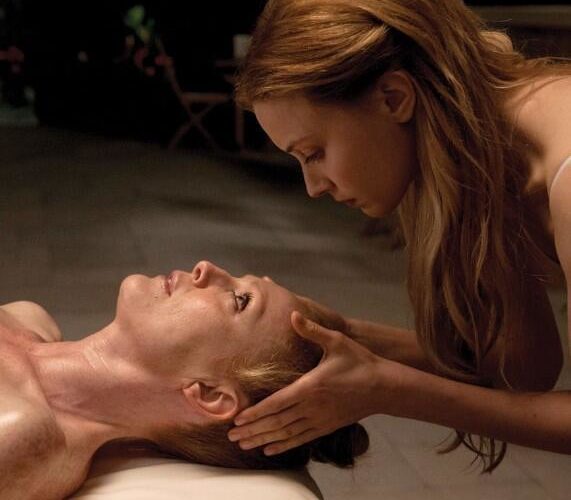 Looking at the above behind-the-scenes still from David Cronenberg‘s Videodrome, it’s no secret that the director has long been obsessed with body mutilation, for better or worse. He’s now taking his fascination from the screen and putting it into practice with a new digital extension of TIFF’s upcoming David Cronenberg: Evolution exhibition.

A new viral video for the project has landed, which comes from the mind of Lance Weiler (and includes music from Broken Social Scene‘s Brendan Canning), featuring our Cosmopolis director undergoing some tests and cryptically discussing the procedure. Even after viewing and exploring the official site, we’re not sure what’s in store, but it’s bound to be interesting.

When it comes to what Cronenberg is doing next — something that doesn’t involve any sort of brain transplant — there’s the next feature-length picture, Maps to the Stars. The hopeful Cannes premiere is boasting a cast that includes Mia Wasikowska, Olivia Williams, Robert Pattinson, and John Cusack, with today bringing our first look at Julianne Moore and Sarah Gadon, thanks to a fan site. Check it out below, along with the aforementioned viral video and a brief explanation of what it contains. One can also click over here for a synopsis of Cronenberg’s next film, along with a few more stills. What do you make of the video? Are you looking forward to Maps to the Stars?