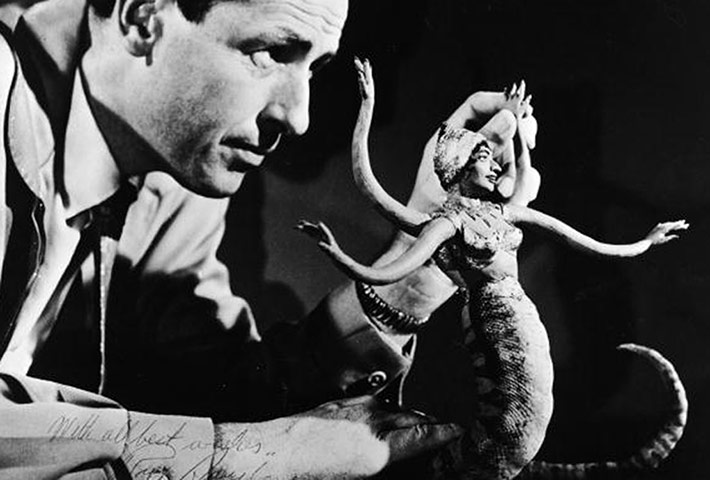 A true visual effects legend was lost today as Ray Harryhausen, the stop-motion master behind the creatures in such classic matinee movies as Jason and the Argonauts and The Golden Voyage of Sinbad, passed away at the age of 93. Harryhausen plied his trade for three decades, masterminding some of the most unique creature designs in movie history and influencing an entire generation of filmmakers who fell in love with his signature style and look. Harryhausen’s legacy and importance were put on full display in 2010 when BAFTA held a special tribute in honor of his 90th birthday, featuring filmmakers like John Landis and Peter Jackson and legendary author Ray Bradbury discussing his career and work. Do yourself a favor and watch all 40-plus minutes, followed by some additional videos on the legend.

If you want want to know even more about Harryhausen and his impact on motion pictures, you can also check out a quick overview of every creature he created throughout his career as well as a 6-part documentary called The Harryhausen Chronicles which should fill in any gaps. See both below.

The influence of Mr. Harryhausen simply cannot be understated and in the coming weeks I would go out of my way to seek out as many of his films as possible. They might seem dated now, but the mastery and artistry he exhibited shines through and it’s no wonder why he’s one of the most influential visual effects legends of all-time. He will be sorely missed.

What are your fondest memories of experiencing Mr. Harryhausen’s work?