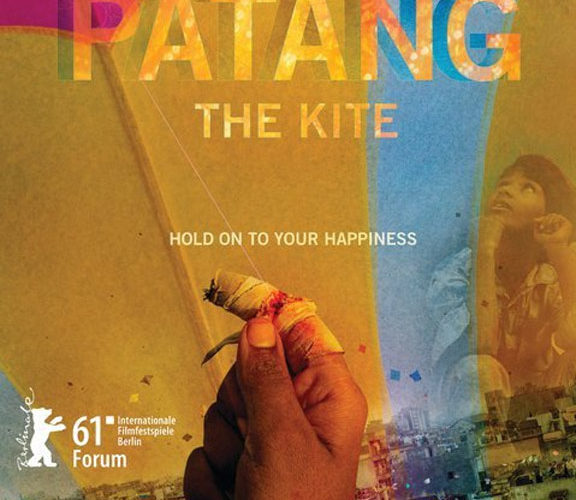 For Chicago-born Indian-American Prashant Bhargava, his debut feature film Patang [The Kite] is a seven-year labor of love. Rooted in the memory of his own uncles fighting kites in the sky, the writer/director decided to fashion his tale of familial bonds around the northern Indian festival, Uttarayana. By utilizing the dueling of magnificent beauty and fierce warfare the thin paper fliers portray, Bhargava gives us a metaphorical entity to mimic the battle between brothers Umesh and Jayresh. Two boys with differing ambitions, their kinship in youth rooted in their love of cutting down as many kites as possible. Teammates in the endeavor, age soon made way for their opposing aspirations in business, a contentious point they would finally part ways on.

The eldest saw the true heart of Old Ahmedabad and looked to continue the family’s work in his homeland while the other dreamed of progress. So as Jayesh (Mukkund Shukla) sold the business and moved to New Delhi, Umesh turned to the bottle to find his early demise at its bottom. While the surviving brother raised a daughter acclimated to city life, (Sugandha Garg‘s Priya), the void of his fallen sibling left a widow, (Seema Biswas‘ Sudha), to care for her mother-in-law Amma (Pannaben Soni) and son Chakku (Nawazuddin Siddiqui). Two different worlds divide the family in half and after five years away, Jayesh decides to return home to relive his kite flying days and show his daughter a bit of her heritage. With ulterior motives hidden as well, their return to Ahmedabad stirs up dormant feelings and creates a whirlwind of emotional upheaval in its wake.

Through this reunion, we discover the glaring differences and stunning similarities between Priya and her cousin Chakku. Both youthful and exuberant, they would like nothing more than to ignore the overprotective adults surrounding them and have fun. She is studying in Delhi while he embraces the life of a singer; she wishing to break free and enjoy herself away from the stern gaze of her father and he trying his best to politely deflect his uncle’s obvious disapproval of his lifestyle. Along with Sudha and Amma preparing the feast for Uttarayana, we also meet a small boy named Hamid (Hamid Shaikh) who delivers kites to their makers’ customers and Bobby (Aakash Maheriya), a camera repairman’s son made to quit college in order to help at the store. Each character is unique in its motivations and actions, but all have gathered for the event that unites a city with the millions of colorful kites soaring through the air.

Bhargava shoots everything naturalistically, the result of spending three years with the non-actors involved to understand who they are and to fashion their roles around reality. The festival enamors Shukla—much like his role of Jayesh— and his friends flying with him in the film are real life compatriots. Their joy is captured alongside the kite making process from the glass-shard infused lines, the paper-thin bodies, and the bandaged fingers necessary to avoid slices. We are flies on the wall, experiencing the festival as it happens in real time: the laughter, the machismo, and the childlike glee. But it’s not just on the rooftops; we also become privy to the children below waiting to catch fallen victims out of the air. The beauty of this dance is something like you’ve never seen before and perfect fodder for the personal tale unfolding.

And while the director was cautious in his process—to show India in all its glory away from the commercialization of Slumdog Millionaire and the stigma of Bollywood—it was intentional. Trying to bring real, subtle drama in an Indian light, he excels at finding those authentic moments necessary in the cutting room. So much of Patang is culled from extensive footage caught by he and his cinematographer, kinetically edited together so the rhythm of the visuals matches the jubilant score as the colors engulf you. It is his country shown through Old Ahmedabad. Cows roam the streets and gas-powered rickshaws and motorcycles speed by. There is no artifice, just a delicately detailed look into a real world with real problems. We all have family members whose best intentions aren’t necessarily in line with our hopes and dreams. We must learn to compromise and forgive, hoping one day to be whole again. Much like his short film, Sangam, themes also abound about the stark contrast between two ideals from competing worlds and the idea that perspective can make one action a wonder to some and a nightmare to others. Revolving this tale around two halves of a family—the progressive city versus the conservative—we watch the clash of impersonal detachment against ease at love. Seen no better than with Priya and Bobby’s burgeoning affections, the differences between wealth of material and that of heritage is in full view. Ahmedabad is more than just a city on the rise; it is also a living creature with a plentiful heart to welcome visitors and coexist. It’s hard sometimes to accept such love, the desire for success and material gain too much to contain. But one must realize what it is that makes them happy and also discover it may not be the same for those they wish to protect. All families have points of contention to drive them apart; we all simply hope to remain a cohesive whole that understands our bond supercedes the rest.

Each character is fragile and highly susceptible to the chaotic turmoil of their past. Each is more than the assumptions placed on them too. Chakku is thought a screw-up, wasting life with dreams of rock and roll, of idolatry over charity. But we see who he really is as he plays with Hamid, his heart wide open. The same goes with Priya, the ‘good child’ doing her father’s bidding yet always looking to break free. She roams with her Super-8 camera—the touched-up footage in post appearing as though shot from it, tactile and stunning—dancing and meeting new people. Priya embraces Ahmedabad like it should be embraced, but her intrinsic need of city life will always hold her back just as Chakku’s love for simplicity and family will never disappear.

We watch these children of God soar and fall like the kites flown high, each clashing with a threat of cutting loose. Bhargava has a keen sense of universal community and is able to engulf us in this world to show how similar humanity is. We see glimpses of our relatives and ourselves within each frame, the story unfolding towards a hopeful and brighter future together—sentiments we all aspire to achieve.

Patang is currently playing at the Vancouver International Film Festival.