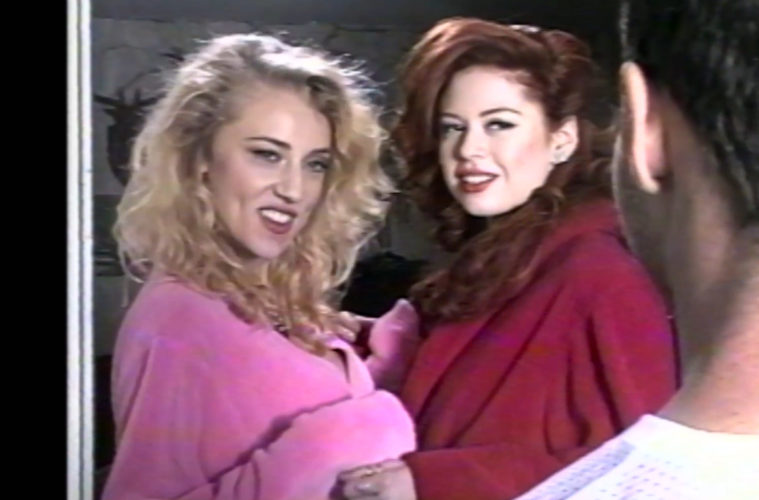 There’s no denying that the invention of VHS was one of the most culturally impactful things to happen in the 20th century. For the average consumer, VHS made it possible to store media easily whether it was buying a film or using a VCR to record TV shows. And with the introduction of VHS camcorders, people could record and store away their own memories in an accessible, cost-friendly fashion. The rapid evolution of technology in the 40+ years since the birth of VHS makes it all look clunky and rudimentary now, but the “simpler times” of the past have led to a nostalgia for the ‘80s and ‘90s in today’s pop culture. Jack Henry Robbins’ VHYes is another addition to the pile of current media taking a wistful look back to the days of analog, using a sparse narrative to cobble together comedy skits with mixed results.

Taking the form of a found footage movie, VHYes plays out as if we’re watching a tape from a video camera belonging to 12-year-old Ralph (Mason McNulty), who unknowingly tapes over his parents’ wedding video as he tests out his new toy. After his father discovers the camera can be hooked up to the TV and it, Ralph uses the camera to tape late night shows while filming everything he can during the day. That’s all the setup needed to let Robbins run wild with the channel surfing format, recruiting a strong ensemble of comedians and character actors to pop up in various TV shows, infomercials, ads, and movies (Tim Robbins and Susan Sarandon–Robbins’ own parents–also make quick cameos).

In terms of seizing on the wave of ‘80s nostalgia, VHYes is a little late to the party. In more recent years we can point to Stranger Things, but we can go as far back as the late-2000s with Everything is Terrible! and their collection of VHS oddities. Some of the sketches here, like a Bob Ross-inspired show called “Painting with Joan” or a series of awkward infomercials, recall the public access skits of Tim and Eric and a lot of Adult Swim material. There’s nothing wrong with riffing on similar material, but a lot of VHYes’ parodies fall flat, like a soft-core porno about alien invaders that’s more of a direct commentary on today’s immigration issues. A lot of the times the jokes feel reliant on the video format and its limitations, as if the video tracking and purposefully bad production qualities can fill the gap between ideas and execution. Instead, the gap gets filled with memories of shows and movies that do a better job at the same thing.

But VHYes isn’t devoid of laughs or ambition. Reno 911! stars Kerri Kenney (as Joan) and Thomas Lennon (as an arrogant infomercial host) continue to prove themselves as reliably funny presences in everything they star in. And two highlights include an Antiques Roadshow spoof with a bizarre host (played by On Cinema’s Mark Proksch) and another soft-core porn parody called “Hot Winter,” which does a far better job at mixing cornball aesthetics with contemporary issues than the alien invader film. Robbins also takes his film into unexpected directions for its climax, where Ralph’s personal life (mostly hinted at through the home movie segments) clashes with the sketch universe in surreal and unsettling ways. There’s a sincere message baked into the ending as well about relying more on experiences themselves rather than recording them, but it rings hollow. For a film so obsessed with experiencing nostalgia through past objects (all of the film was shot using VHS and Digital Betamax camcorders), its parting note feels a bit like the film having its cake and eating it too.