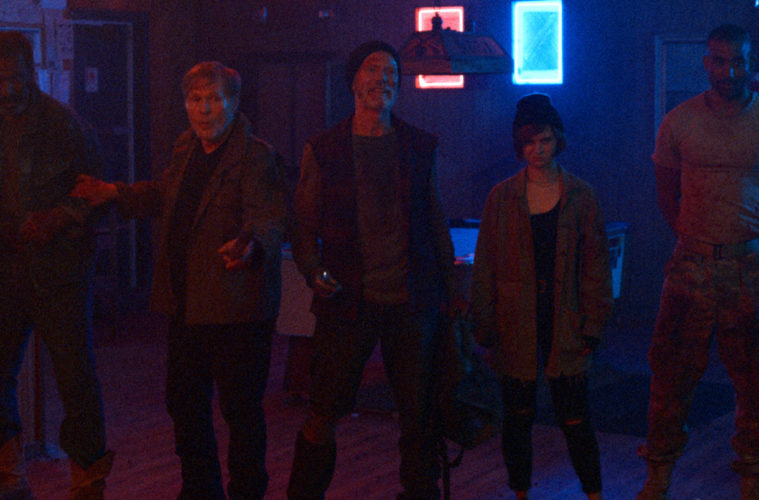 That co-writer Matthew McArdle remains shocked even after seeing the film he and Max Brallier wrote on the big screen shows how tough the accomplishment proves. Best friends since childhood, the two began their script for VFW with transparent intentions as far as harkening back to the no-holds-barred VHS gems they’d scour video store shelves to find. Using John Carpenter’s Assault on Precinct 13 as inspiration, they created a group of aging vets decades-removed from service yet still thick as thieves with a drug-fueled, zombie-esque horde threatening to attack their Veterans of Foreign Wars Post in waves. It took seven years, but Dallas Sonnier finally called to say he’d finance it before director Joe Begos, a stellar cast of character actors, and the rejuvenated Fangoria label came aboard.

You can’t blame McArdle for being in awe as the names kept coming: Stephen Lang, William Sadler, David Patrick Kelly, Martin Kove, Fred Williamson, and George Wendt. That’s a rogue’s gallery of hard-edged brute force necessary to batten down the hatches of a bar, pick up an axe, and wait for rabid pursuers to burst through with nothing but crazed malice. But they’re also the type to still appreciate the delineation between wrong and right while maintaining a sense of humor to combat the horrors flooding back as they ready for one final stand. Fred (Lang) was their superior in rank then and stalwart conscience slinging drinks now—his VFW Post a safe haven with which to reminisce, band together, and leave selfish desires at the door.

So when Lizard (Sierra McCormick) runs in with two angry mountains behind her, instinct prevails. Fred takes aim with his shotgun and pulls the trigger while Walter (Sadler), Doug (Kelly), Lou (Kove), Abe (Williamson), and Z (Wendt) look on with dismay. This moment of surprise doesn’t last long, however, as one gets injured and another killed to wake them up to their current predicament. What was supposed to become a fun night out at a strip club ends up being their own Alamo with Lizard and the bricks of Hyper (a new, extremely powerful opioid) she stole from Boz (Travis Hammer) and his wasted clientele squatting in the abandoned movie theater across the street stuck in the middle. While some say throw her to the wolves, Fred refuses.

It helps that Shawn Mason (Tom Williamson) made this bar his first stop upon landing on American soil post-deployment in the Middle East. Seeking solace and camaraderie from those who understand, he surely would have enjoyed nothing more than an evening of hard liquor and Vietnam anecdotes from Walter. Shawn too sees a civilian in need, though, springing to action when the moment demands. So we end up with four-and-a-half old-timers (the maimed party still has his trigger finger) and their young counterpart getting whatever details they can from Lizard to know what they’re up against. And since they’ve unwittingly killed Boz’s brother in the chaos, their war doesn’t end with his mindless army of Hypers. He and his lieutenants (Dora Madison’s Gutter and Josh Ethier’s Tank) wait.

The filmmakers do well paring things down for simplicity’s sake as we find ourselves knowing these men without actually knowing them. It’s Fred’s birthday and his reaction to the celebratory love the others share reveals the prickly teddy bear he is while the rejection of Lou’s desire to upgrade his truck illustrates a rocky personal past wherein that old hunk of metal and this Post is all he holds dear. Doug has his cannabis, Lou his expensive clothes, and Walter his ability to drunkenly ensure everyone is having a good time. Abe makes reference to the blade he gifted Fred that hangs above the bar and Shawn proves his worth as a marksman desperate to return home to his wife. Each vice and virtue inevitably returns with purpose.

McArdle and Brallier have thus rendered VFW an efficient us versus them scenario with Fred’s crew possessing an infectious, three-dimensional rapport opposite Boz and cronies leaning into their one-track yearning for a fix. Begos then brings the grainy and gritty aesthetic its predecessors possessed to really deliver a throwback vibe augmented solely by new advancements in violently realistic gore. He’s got axes going into shoulder blades, shotguns eviscerating skulls, and heavy-duty rotary chainsaws mowing through bodies like they’re made of paper. Marry that carnage with performances hinged upon authenticity specifically because of what kind of film this is rather than despite it and you’re in for an entertaining treat of graphic, bone-breaking action. Fred and the boys aren’t indestructible. Their bravery matters precisely because of their mortality.

This emotional impact is what helps the film stand apart from its brethren because the veterans’ stand is about more than protecting Lizard. Her innocence in the face of a monstrous evil that’s overrun America is as real on its own as it is a metaphor for that dying breed of folks who valued human life above greed that this country has lost. When the world fills with people like Boz treating others as expendable means of entertainment who aren’t worth the price of Hyper coursing through their veins, watching Fred rally his friends to embrace their roles as staunch defenders of morality and justice proves inspirational. They have a code wherein they only kill those wishing to kill others. It might sometimes bend, but it never breaks.