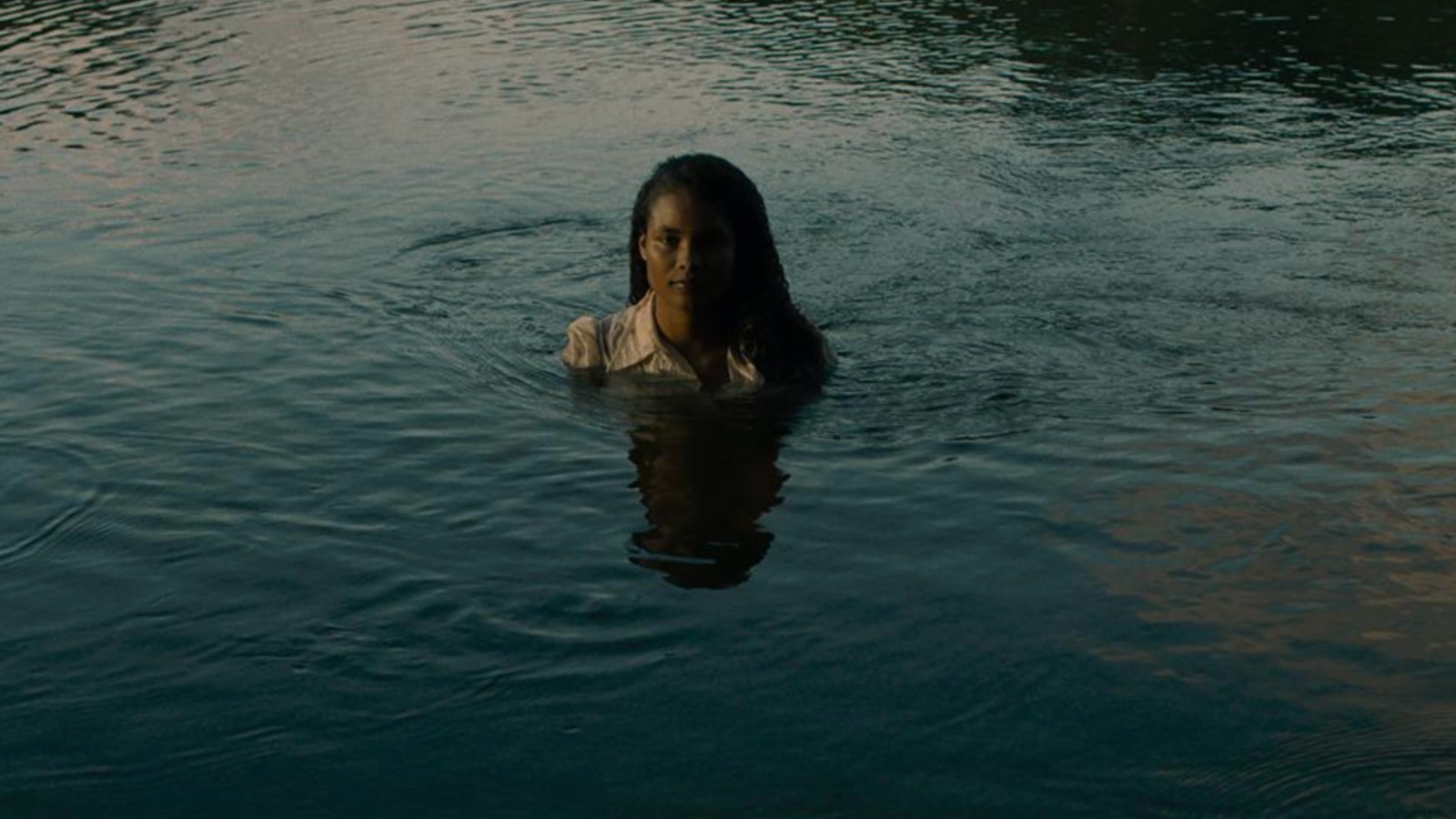 Fluid and far-reaching, the Rio Hondo snakes between Mexico and what was once British Honduras (now Belize). Terrain on both sides is dominated by the dense Mayan rainforest, rendering moot any notion of borders or nation-states. Yulene Olaizola’s mysterious and confounding Tragic Jungle takes place in the year 1920 when this hostile region played host to a bustling gum trade spurred in equal parts by colonialism and capitalism.

In the film’s epic opening scene, a group of Mexican laborers ascend massive Zapote trees and carve out deep track marks allowing white resin to slowly flow down the trunks. One of the workers sends his cryptic thoughts out into the lush environment through voice-over, almost as if he were beginning to realize how these manmade scars could potentially provoke a vengeful mythical response from Mother Nature.

Moments later, a young Belizean woman named Agnes (Indira Rubie Adrewin) dressed entirely in white trudges through the thick jungle with her companion Florence (Shantai Obispo). They aren’t in a hurry, but are obviously trying to move undetected. “The jungle likes to talk,” says their guide Norm (Cornelius McLaren), warning them to try and minimize their footprint on the trail.

Olaizola soon reveals that their pursuer is an enraged Englishman whose romantic intentions Agnes has thoroughly denied. It is here that Tragic Jungle momentarily turns into a riveting chase film, one that ends in sudden and brutal bloodshed. From that carnage Agnes emerges inexplicably unscathed, reborn as something far more sinister and intoxicating.

When one of the aforementioned Mexican laborers decides to bring her comatose body back to the all-male camp, the film takes on a more lethargic and stifling pace. Agnes’ mere presence eventually disrupts the men’s menial work routine, unearthing their true capacity for sexual violence, greed, and betrayal.

In adapting the classic Mayan legend involving La Xtabay, a mysterious woman who lures men to their deaths in the rainforest, Tragic Jungle tries to create an overwhelming and inescapable sense of dread these characters cannot escape. But often it comes across as impenetrable and incomplete with immersive dream sequences that rarely make an impact and a grinding synch score that feels completely out of place in this meandering Herzogian scenario.

Olaizola has shown a talent for jumping between genres and tones before. Her drama Paraísos artificiales (2011) intimately tracks the friendship between a recovering heroin addict and a Veracruz fisherman, while Fogo (2012) takes place in another encampment of men on a remote island off the coast of Newfoundland and Labrador, Canada. Thematically, these films and Tragic Jungle all share an affinity for characters that are not only physically anchored to specific environments, but also trapped by their own self-destructive decisions.

Yet, the ill-fated men of Tragic Jungle never materialize as anything more than simple archetypes of the wide-ranging failures and hypocrisies embedded in patriarchal institutions. Like Agnes, they are all essentially ciphers that are under the illusion of being in control, beholden to the whims of an angry forest god.

With this at times brutal and unflinching anti-adventure film, Olaizola obviously wants to land a visceral and damning gut punch, slowly pulling the proverbial scabs off these men’s souls. But by embracing such plodding cinematic rhythms, she’s sacrificed the kinetic momentum needed to make this a more probing and scathing exploration of drowning masculinity.