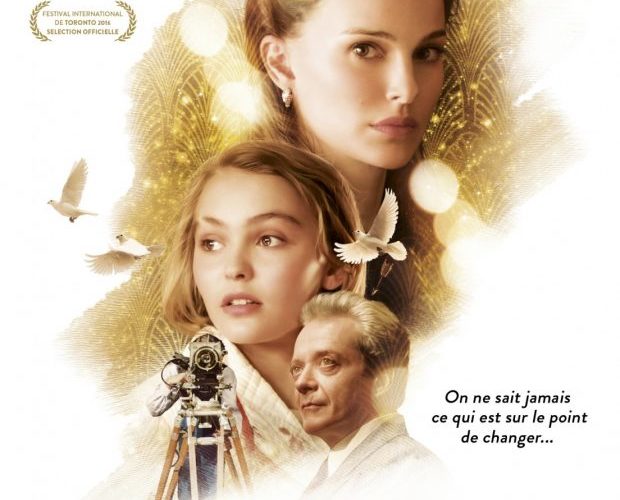 It’d be one thing, a simpler thing, if Rebecca Zlotowski‘s Planetarium was a middle-of-the-road effort that’s over and done with in less than two hours. Alas, it stars at a place of such promise, such intrigue, even such wonder, and, after some point, steadily progresses from unique investigation of faith and duty to middlebrow European co-production — a rather enervating thing, then, that left me thinking “no more movies like this, ever” while a sizable portion of its runtime was still left. There isn’t a precise image of the type of movie to which I’m referring, but I can at least say it goes something like this: an English-speaking (often American) star in a well-dressed, amply lit European nation, surrounded by foreign actors who rarely (if ever) speak their native tongue. I’d come right out and say it’s best embodied by, say, Suite Française, but the Weinstein Company has yet to release that in the United States, and I can’t imagine many of you would see it if the day ever came.

Things begin aboard a train rolling through a star-lit countryside, a brisk and mysterious introduction where just about anything feels like an open possibility. (I’d say it’s best to enter this knowing nothing, but that impression only held for the film’s first half.) A pair of sisters, Laura (Natalie Portman) and Kate Barlow (Lily-Rose Depp), tour pre-war Europe with shows that display their supposed ability to communicate with the dead, “skills” that we witness in minimal-but-extravagant shows whose sequences find a common ground between Josef von Sternberg and Arnaud Desplechin. These are the center of Planetarium’s initial stretch, and so their ability to command attention – it helps that Zlotowski and cinematographer George Lechaptois stage the sequences in a rather expedient way that, by showing rather than dwelling, neither questions nor affirms the the Barlows’ legitimacy — helps proceedings glide along rather smoothly.

Those comparisons are not made lightly, and that I ultimately like Planetarium most when it reminds me of other filmmakers is not to discredit Zlotowski’s discernible vision. What delights most is something less discernible than influence: a conviction to “stop” for a bit of exhibitionism — the only point where Portman and Depp’s chemistry, as well as the sense of playing true, lived-in parts, shines — without sacrificing visible progression in character and narrative. The variety and frequency of images (effects such as dissolves, match cuts, and irises make an appearance) in early sequences do more than inform; they move and feel their way through the narrative and a player’s place within it. This much is said in spite of how much the younger star is sidelined in favor of her older compatriot, and that, when enough time and incident has passed, it’s easy to forget she’s even a part of this endeavor until the movie decides it’s time to integrate her – a return that’s appreciated, if not welcome for how deadening those narrative turns feel.

More concrete plots begin forming once the duo comes into contact with a French film director, Emmanuel Salinger (André Korben), whose first big scene — in which the man’s left stunned by a séance that climaxes as he nearly suffers a seizure — is Planetarium’s first true affirming of their powers. Thus they’re recruited to “play” psychics in Salinger’s film. Zlotowski is wise enough never to expressly underline parallels between mediums and the medium, their reliance on capturing the ineffable and communicating them to the outside world exactly the sort of thing many storytellers would latch onto. What conclusions might be drawn are instead drawn from the ghostly, even otherworldly effect of seeing Portman and Depp transition from vivid 21st-century cinematography to convincingly illustrated approximations of 1930s film stock, an effect itself underlined in the characters’ discomfort with film’s various production processes.

This is the last remaining bit of convincing, worthwhile drama in Planetarium‘s repertoire, after which points it’s revealed that Zlotowski isn’t wise enough to let her sense of mystery hold. What all this leads to is a romantic drama of many players and little reason to care, moving as it does from one sequence of interaction (be that intrigue or rejection) to another with nothing more than Portman to coast on. (Hello, Louis Garrel. I don’t want to write an entire review without mentioning you, but, aside from a connection to the first paragraph, I have nothing else to say about your being here.) One could do much worse than that, but the actress’ input isn’t enough to downplay Planetarium’s second major failing: a decrease in formal interests on seemingly anyone’s part as the movie drifts into standard shot-reverse patterns and a rather basic progression of plot in scene-to-scene and moment-to-moment terms.

Little is left after a while until, finally, Planetarium doesn’t conclude so much as come to an end, and the lasting impression is one of bitterness — a bitterness at once sweetened and worsened by memories of the genuinely great work it had promised and, at turns, even embodied. Yes, those pleasures are palpable and do have a way of lingering in the memory. Otherwise? Lord, that’s just not good enough.

Planetarium premiered at the 2016 Venice Film Festival and opens on August 11.