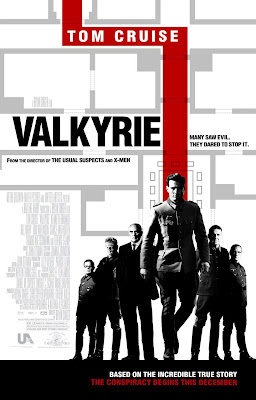 Valkyrie, directed by Bryan Singer (Superman Returns), tells the undeniably interesting true story of Nazi Colonel Claus von Stauffenberg (Tom Cruise, Tropic Thunder) and his attempt to assassinate Adolf Hitler and quell the destruction of the Nazi party. Starting with a bang (and some beautiful cinematography courtesy of Newton Thomas Sigel) in the African desert, Stauffenberg loses his left eye and right hand. Upon his recovery, the colonel is recruited to conspire against the furor.

Unfortunately, this is, more or less, where the protagonist’s character development stops. Likewise, the film falls into one gear for the next 40 minutes, didactically explaining the conspirators’ plan to kill Hitler. While informative, it lacks enough narrative excitement to maintain a keen interest through to the final hour, which is made up almost entirely of the plot being put into effect. The person to blame for this lull in action is screenwriter Christopher McQuarrie (writer/director of the under-appreciated The Way of the Gun), who clearly reasearched this moment in history thoroughly but forgot, during the first-half of his screenplay, to dramatize the story for the screen. Where McQuarrie drops the ball Singer picks it up, providing luscious visuals to chew on throughout. His use of focus and close-up work wonders for the aesthetic, creating a sense of subtle urgency throughout most of the film. Certain shots will stay with viewers after the final credits, a rarity for Hollywood films with larger budgets (this film was reported to be in between $75 and $90 million). The man also knows how to direct a scene, offering some of the most nerve-racking dramatic action on screen this year (see the assassination sequence).

Along with Singer’s directorial eye, John Ottman editing stand out, far and away, as the two best reaons to see the film. Ottman paces the film beautifully, cutting in the middle of action consistently and rarely letting the viewer linger from one scene to another. Ottman’s editing is the only aspect of this film worth serious Oscar consideration. Ironically, Ottman’s score is one of the film’s weakest points. Overwrought when in use and unused in scenes that drown in silence. Along with the misplaced score is the oddly off-key acting, which is nearly universal throughout the cast. One of the few to rise above this criticism is veteran actor Terence Stamp, one of the most underrated players working today. Kenneth Branagh’s presence is wasted in an pivotal but nearly invisible role, while the usually-reliable Tom Wilkinson phones in his performance as General Friedrich Fromm.

As for Cruise, he tries really hard to be Stauffenberg, and not Tom Cruise. Unfortunately, the celebrity that is Tom Cruise proves too big for Cruise to overcome. The actor fails to transform himself the way he did in Tropic Thunder earlier this year. It feels as though Singer did not quite know what he wanted his actors to convey and, in turn, the actors struggled to convey much. They are simply historical mouthpieces telling a great story the world should be aware of.

SIMPLY PUT: A well-made, mediocrly-acted, hot-and-cold political thriller that is hot more than it is cold. And for those who thought this would garner Cruise an Oscar nom or some significant acting cred, you are wrong. Sorry.