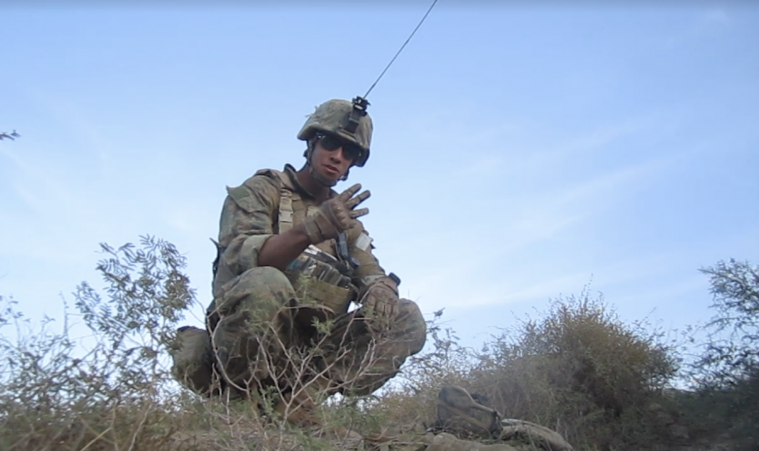 True/False Review: ‘Combat Obscura’ is an Extraordinary Look at the Futility of War

Along with the creeping destabilization of the Middle East and the spiraling growth of the war economy, the American invasions of Afghanistan and Iraq also helped instigate a new form of cinema. For the first time, soldiers and civilians alike in a war zone brought with them highly portable cameras, built into their phones, helmets, even weapons. American soldiers posted videos of themselves going about their days on a new site called YouTube. Later, Islamic militants would post execution and recruitment videos to social media. In a similar way to how the media exposure of Vietnam made that war impossible to ignore in an unprecedented manner, the internet has fused the wars in the Middle East to the ambient noise of everyday life. Paradoxically, this makes these conflicts much easier for a civilian to ignore.

It then requires an act of confrontation to shake a viewer out of their malaise over America’s wars – particularly a documentary viewer, who has surely seen many films about them over the course of the young century. And confrontation is the objective of Combat Obscura in more than one way. Director Miles Lagoze took footage he shot as a Marine combat camera operator in Afghanistan, as well as videos taken by his comrades, and edited it all into a brisk, intense hour of war vignettes. The footage comes from 2011-2012 and was only recently released by the Pentagon.

Lagoze’s role was to gather material for use in military propaganda, but he kept his camera rolling after the needed shots were taken. Combat Obscura can hence be viewed as an hourlong “outtakes” for the commercials full of heroic Marines you see during football games. But that descriptor implies mistakes, whereas what we see of these young men is how they act when their guard is down and they don’t have to perform nobility for anyone else.

Sometimes the results are funny. There are plenty of scenes of dudes goofing off, making up stupid songs to wile away the boredom or smoking weed. There are multiple incidences which could be described as “Kafkaesque,” except they’d probably make Kafka throw up his hands in surrender – pointless, endless hunts for “terrorists” among groups of Afghans who have no idea what the Marines are saying to them. And then there are blasts of terror, incomprehensible battles in which we can’t see who is shooting / being shot at, and the soldiers don’t seem to know either. War is not fought but lived, and this is as close to first-person as one can get without being there.

Combat Obscura sinks deeper into darkness as it progresses, as the utter pointlessness and futility of America’s presence in Afghanistan overwhelms the troops. While we are initially invited to empathize with the Marines, their jokey comradery gives way to vicious menace. There is no apparent mission, just a loop of injuries and reprisals against an amorphous outside threat. The final two scenes are a despairing diptych. In the first, the men realize they’ve killed an unarmed shopkeeper and plot to cover it up. In the second, one of them is seriously wounded in a firefight and they scramble to get him airlifted to aid. There is no point to any of it, just horror. That is all there is to this war, and no uplifting words will ameliorate it.