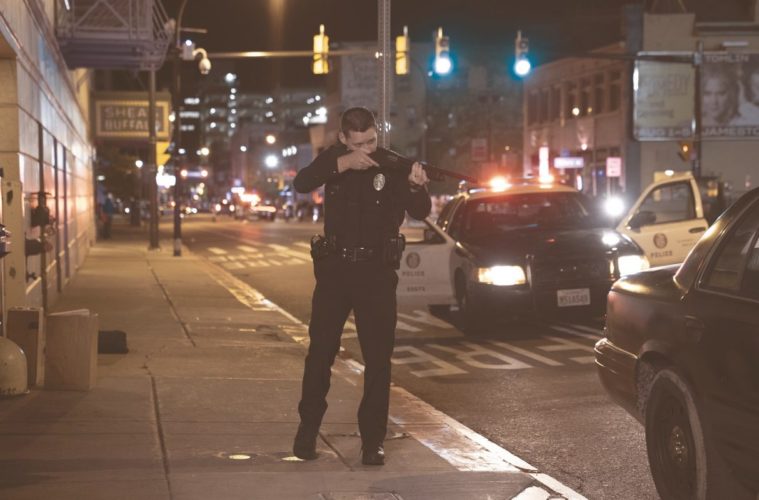 Had Training Day been made today it would have to contend with the changing role of policing in the age of the body camera and the armchair lawyer with a tiny broadcast studio in his pocket. For old school cops like Officer Ray Mandel, who operate in a gray area, its part of the job he laments the most. He’s not interested in de-escalation, although he tows the party line up until the moment when he no longer can–playing by the book might just get you killed.

Crown Vic, written and directed by Joel Souza, is an intensely talky noir drama taking place over the course of one shift that rookie officer Nick Holland (Luke Kleintank) will never forget. With suspects from a bank robbery at large, he and training officer Mandel (Thomas Jane, in one of his best performances) pack a war bag and set out to patrol the streets of Los Angeles. If this version of L.A. is grittier and largely devoid of palm trees and hills, it’s because the film was very visibility shot in Buffalo, New York.

The night proceeds normally as Holland and Mandel patrol skid row, capturing a suspect who took a shot at their Crown Vic: a rich drunk girl who’s crashed her BMW. They also keep tabs on two rouge undercover officers: speed freak Jack VanZandt (Josh Hopkins) and his enabling partner Stroke Adams (David Krumholtz). A break from the streets comes when Mandel and Holland are tipped off to an operation using kids to run drugs, leading to the duo to go off grid. The evening is spent justifying their actions with Jane’s Mandel continuing to provide the chilling details of his past 20 years on the streets, from horrific car accidents to the calls he’s made in the field when the job requires it. Holland, the son of a detective, is a green transplant from up north, eager to learn the ropes and, of course, Mandel sees something of himself in his protégée.

Crown Vic is a riveting procedural driven by dialogue and violence, punctuated by the unpredictable nature of the job from the drunk, high, mentally unstable and those that cross the gray area Mandel operates in, especially VanZandt who gleefully abuses a suspect in a dark alley. As real and visceral as the picture feels, Crown Vic packs what could be a season of violent events, split-second decisions, and moral ambiguity into an ambitious film with a limited scope.

After the carnage the film chillingly concludes with Mandel’s harrowing thesis about the work they do and their role in a society that’s become increasingly uncomfortable now that police work is more visible than ever. Souza, however, doesn’t quite take a side, portraying the good, the bad, and the ugly as a complex series of trade-offs in a larger bureaucracy that’s caused the problem they’ve been forced to clean up. Crown Vic proves to be a limited yet effective study of urban police work initiated by veterans who have gotten this far on street smarts and broken windows policing, rather than the new school of a community policing approach. More than likely in the view of Mandel, that is stuff for the guys that patrol the streets during the day.

Crown Vic premiered at the Tribeca Film Festival and opens on November 8.