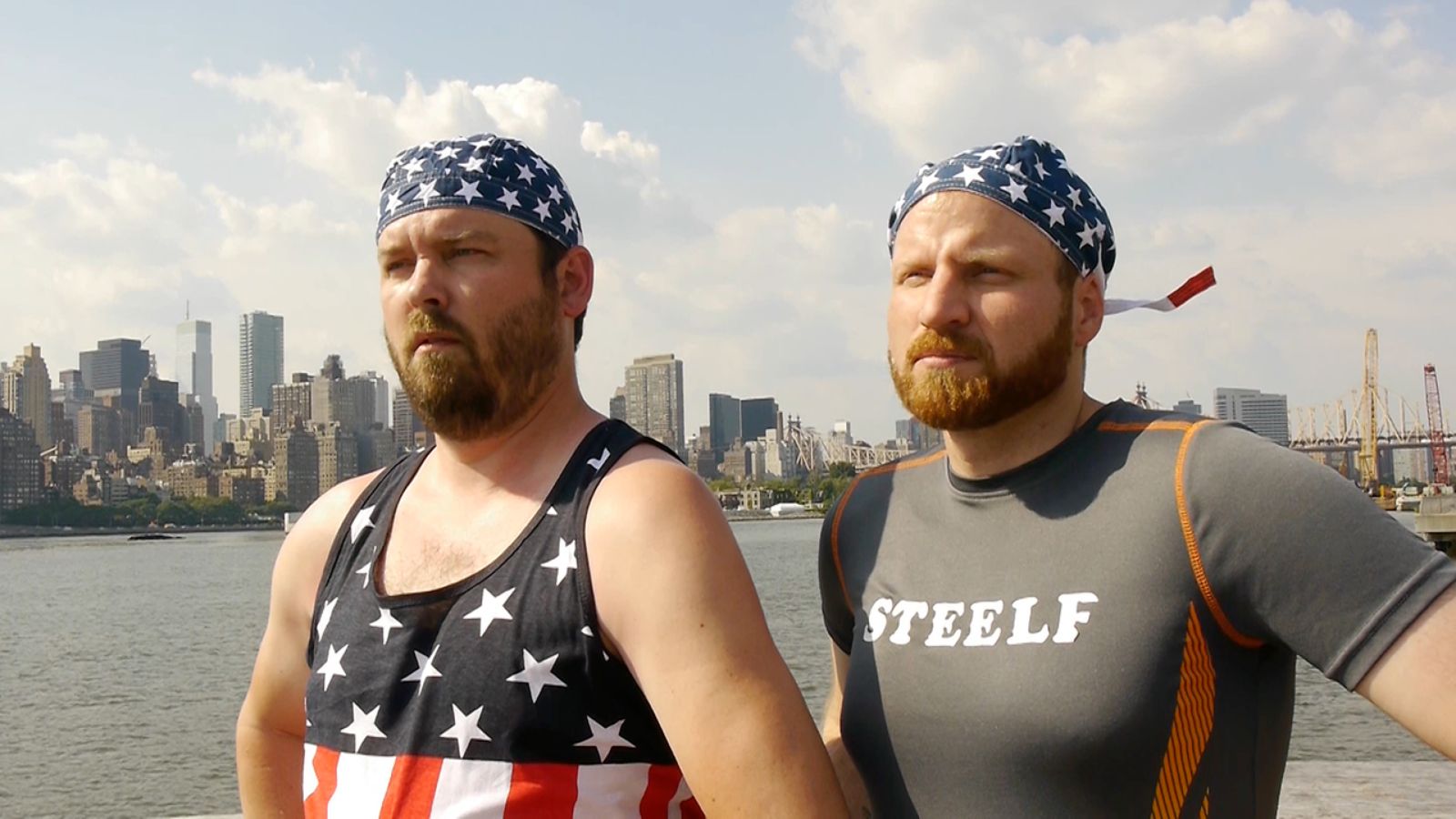 A random VHS tape of a Mcdonald’s janitorial training video serves as ground zero for Joe Pickett and Nick Prueher’s lifelong obsession with obscure video clips that eventually morphs into the touring event known as the Found Footage Festival. Directed by Ben Steinbauer (Winnebago Man) and Berndt Madre (Booger Red), Chop & Steele documents the duo over the course of four years. The result is downright hilarious, examining the absurd predicament Pickett and Prueher found themselves in while pulling pranks to break up their 130 days on the road.

Easily getting on smaller-market morning shows as the Found Footage Festival rolls into town, they test the limits by inventing characters that force the anchors to keep their cheery demeanor. They include a chef who specializes in making smoothies from leftover Thanksgiving meals, an incompetent performer who lectures local students on environmental issues via yo-yo skills, and strongman duo Chop & Steele. That Pickett and Prueher don’t seem to hit the gym raises an alarm from only one local producer.

Along the way they capture the attention of America’s Got Talent, leading to the duo turning the tables on the producers and ultimately finding support from Howie Mandel. Chop & Steele plays like one act of artistic defiance after another in celebration of Pickett and Prueher’s love of obscure content, much of which was never cleared for public consumption.

The film, like a performance of the Found Footage Festival, is pure joy with a few bumps along the way. Both figures open up about their relationship with each other and their significant others, showing the nature of their work can be quite trying. Pickett is partnered with understanding wife Albertina, who councils him against shaving in male pattern baldness before a TV stunt because the holidays are coming up. Prueher is single and considers his next steps, including collaborating with the Drafthouse-Mondo industrial complex on developing board games. Supportive interview subjects include their parents and the Yes Men, who applaud their work in calling attention to the artifact of the cheery, desperate local early-morning news programs.

Chop & Steele is a breezy, nearly pitch-perfect look at the men behind the Found Footage Festival, ultimately finding a profound moment when they meet the star of the Mcdonald’s “McC” janitorial training video and all comes full circle. Like any duo they have their ups and downs, and boast an ancillary backbench of collaborators and partners that produce related content.

But there’s only so much ground a 77-minute documentary can cover, and it’s true to the Found Footage Festival that there’s never a dull moment while also giving its interviewees—including Bobcat Goldthwait, Howie Mandell, David Cross, and Reggie Watts—time to offer context on what is so interesting about their work. It is brilliantly executed by Steinbauer and Mader, establishing the tone from the first deposition video, bringing us into this cult and along for a wild, hilarious ride.