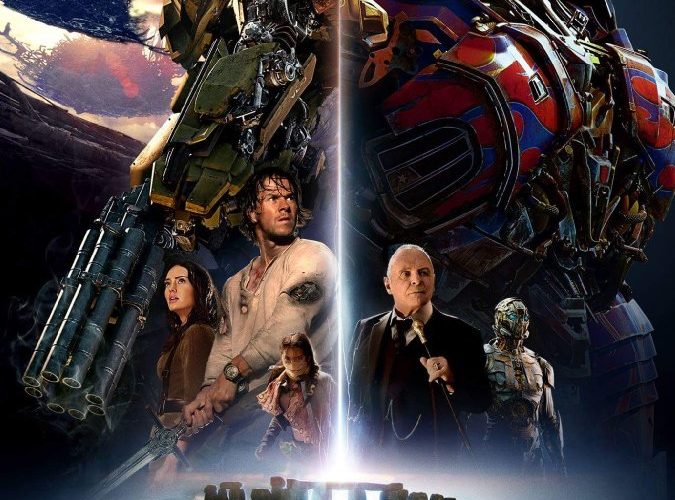 I mean, you know what you’re getting by now, right?

Did you see any of the other Transformers movies? They are all unified in sensibility of craft, story, and tone. The (toy) mold has not been broken for the latest installment, The Last Knight. If you are instinctually repulsed by director Michael Bay’s style or don’t care about giant transforming robots, this film definitely won’t change your mind, and I’ve no idea why you’d expect otherwise. Still, the series is a popular punching bag for critics, who perhaps torque their venom whenever it pops up because of the underlying knowledge that these movies only keep making avalanches of money, and they have no power over that.

That Transformers is treated as the Tiffany Trump to the critics’ Donald among franchises is curious to me. I can’t say I particularly like any of the films, but I also don’t see most of them as that much worse than typical big-tent studio offerings (Revenge of the Fallen was pretty wretched, though). Perhaps because they embody the purest, most id-like indulgence of blockbuster conventions, they receive a correspondingly larger backlash. But among movies that suck up billions thanks to audiences’ hunger for spectacle, few accomplish spectacle the way these do. It’s perfectly fair to disparage “Bayhem” for its personality, but actually having personality is more than can be said for a lot of blockbusters that critics adulate (*cough* Marvel *cough*). He is a rare filmmaker who seems to get that bombast is a draw for the viewer, and who has an honest sense of dramatic movement, even if he’s easy to make fun of since he applies those dramatics to almost every movement.

I’m not even sure why I feel compelled to come at this from a defensive angle. The Last Knight is mostly not on my wavelength. In one scene, a transformer swaps out his charming vintage Citroën disguise for a sterile modern Lamborghini, which offended me almost on a religious level (mind you, I’m not even a car guy). Like, I’m strongly of the opinion that a friendly robot voiced by Omar Sy cartoonishly exaggerating his French accent should be a Citroën DS, while one of the mean robots should be a hyper-aggressive Lambo, which looks like the vehicular embodiment of a man who never tips. I also think that watching robots fight other robots is superior to watching humans fight robots, but Michael Bay does not and never has shared this opinion. More disappointingly, despite Bay’s deep military fetish for jargon and hardware, this film’s sense of action geography and tactics is atrocious. Soldiers will arrive on a scene and be shooting at a target for half a minute before we’re actually shown what they’re fighting.

There’s a plot, and much of it, but absolutely no one cares about that except pop culture writers hungry for articles based around ticking off all the inconsistencies, plot holes, and “crazy things that actually happen.” VFX-heavy action movies have stories solely to string the big sequences together, and so the Transformers films, in keeping with doing everything extra, have the most needlessly complicated excuse chains. It’s a slurry of transformers being hunted by the government, the remnants of their home planet on a collision course with Earth, more reveals about transformers having intervened throughout human history, and a hunt for the staff of Merlin. Oh right, Merlin the wizard and King Arthur and all that really happened. They had transformer friends who combined into a robot dragon. That was a bit I was quite fond of.

Impressively, the writers manage to cram more characters in than ever before, most of whom are extraneous and an alarming number of whom vanish without explanation like toys getting lost during playtime. Mark Wahlberg is back, as are John Turturro (in a literally phoned-in role), Timothy Olyphant, Glenn Morshower, Stanley Tucci in a different role (Merlin!), not Tyrese Gibson for some re- wait, that’s Josh Duhamel, not Timothy Olyphant? Oh, wow, okay.

There are also the transformers themselves, as flimsily personalitied as ever. Bumblebee is supposed to have an arc about growing up or something, but doesn’t really demonstrate that. Optimus Prime (Peter Cullen) is less present here than he was in the movie where he was dead for most of the running time, getting brainwashed early on and then (much) later acting as a baddie for exactly one scene before snapping out of it. There’s a British butler robot with anger issues voiced by Jim Carter who’s a lot of fun, probably the best thing about the movie. He’s the source of most of its good jokes – the ones not predicated on tired stereotypes or the idea that swearing is inherently funny.

This is supposedly Bay’s last Transformers, though the series is likely at the level where inertia will carry it through many years and automatic billion-dollar returns to come. Expect the reviews to be kinder if a new director with a more normal approach steps in, but don’t expect the movies to be as distinct – for better or worse.

Transformers: The Last Knight is now in wide release.