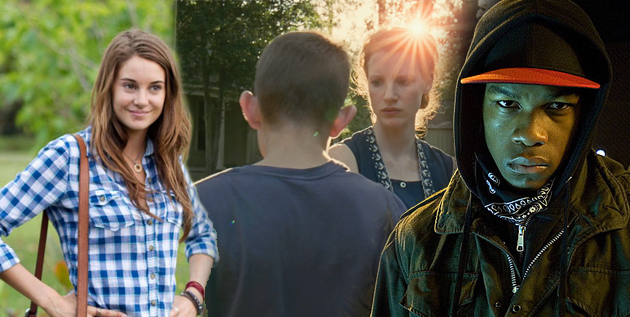 The Top 10 Breakthrough Performances of 2011 One only gets a sole opportunity to make their initial mark and it is a thoroughly remarkable experience to witness a star in the making. This year we’ve seen a number of break-out performances worthy of recognition and have rounded up our favorites. They range from an experienced thespian finding new life in front of the camera, a previous non-actor learning the ropes and an actress who overwhelms with a sheer breadth of projects. As part of our 2011 year-end features, check out the rundown below and let us know your favorites.

A brave and powerful oedipal drama set on a Quebec dairy farm, Wetlands and Gabriel Maille’s brilliant performance as Simon, a disturbed isolated teen, was a highlight of TIFF 2011. With only four credits to name, Maille takes center stage, holding his own against the veteran cast in a challenging roll. – John Fink

Azazel Jacobs’ eerily perceptive Terri is surely one of the year’s most overlooked gems, and as good as John C. Reilly’s supporting turn is — it’s his best work of the year by a country mile — it’s Wysocki’s closeted embodiment of the titular character that anchors the film. His work, like the film, is admirable for its unapologetic patience — Wysocki peels back the layers of Terri only when it makes sense and feels right. Jacobs and screenwriter Patrick Dewitt deserve substantial credit for centering on a type of character that is rarely given prime screen time, and Wysocki should be equally applauded for the truthfulness he carries in bringing that vision to life. – Danny King

The oldest actor on this list has no easy task in his feature film debut. British opera singer William Shimell was chosen to play across one of the finest actresses of our generation, Juliette Binoche. From the first scene in Certified Copy, one can tell Shimell has a certain magnetism and presence that is the perfect fit for a film that relies on the most minute of character actions to convey its story. – Jordan Raup

7. Brit Marling  (Another Earth, Sound of My Voice)

The Sundance (barely) sci-fi drama Another Earth may have been divisive, but one thing was clear: the lead performance from Brit Marling was intoxicating to behold. Her other Sundance film Sound of My Voice unfortunately has yet to see a release, but we thought she delivered an equally impressive performance in that cult drama. Marling proved in her debuts that she has that rare “it” factor and is already on her way up, working with Robert Redford on his next film. – Jordan Raup

Attack the Block starts by portraying John Boyega’s Moses as a gutless thug, but – thanks in no small part to an alien assault – he’s transformed into the savior of the titular block and all of London. The range shown by the young performer is rather unexpected, and thanks to Joe Cornish’s cleverly-structured screenplay, he’s given plenty to work with in an economical length of time. Let’s hope he can keep this up from here on out. – Nick Newman

5. Ezra Miller (We Need To Talk About Kevin, Another Happy Day)

Perfecting his tortured adolescent character to the ultimate degree, Ezra Miller comes off the underseen Aftershool (from a filmmaker involved with creating another break-out star on this list) to Lynne Ramsay‘s startling and deeply effective We Need To Talk About Kevin. Playing off the excellent Tilda Swinton, Miller is one of the most unsettling villains of the year, creating a performance that is even more disturbing when we realize the root cause of his actions. Add in his strong performance in Another Happy Day and Miller’s future is an invigorating one. – Jordan Raup

One of the most natural, relatable performances in a long while, the young girl who was, only up until recently, known as the teenager in ABC Family’s melodrama The Secret Life of the American Teenager, will soon be known as one of the best actresses of her generation. – Dan Mecca

3. Hunter McCracken (The Tree of Life)

The Tree of Life was a film that hinged on a child actor bringing to life a character who embodied none of the usual Hollywood child cliches. He wasn’t meant to be precocious or wise beyond his years. Rather, Hunter McCracken was charged with bringing to life the wonder, confusion, and anger of a child just beginning to understand the adult world. To that end, McCracken imbues his character with all of those traits and turns in a performance of honesty and clarity, unflinching from the rebellion and cruelty of innocence on the cusp of being lost forever. – Brian Roan

Creating a character unmoored from society and all the rules and conventions therein while remaining sympathetic is no easy job. To make that character’s scars and afflictions appear as deep and painful as possible requires a strength of performance that even the most seasoned actress might struggle with. As such, it’s a small miracle that Elizabeth Olsen’s breakthrough performance in Martha Marcy May Marlene should reach such rarefied heights. Her portrayal of wounded former cult member Martha is bracingly honest and painfully realized. Even as she breaks down and strikes out at the world around her, we can see the wounded child underneath, scared and alone. That is the real triumph in Olsen’s performance. – Brian Roan

It was a massive breakout year for Jessica Chastain, and with good reason. In The Tree of Life and Take Shelter she was given the impossible duty of playing a kind and loving wife, the very embodiment of saintly maternal love, while holding the character back from the brink of cliche with power and wisdom. In The Debt she played a young Mossad agent on the mission of her life. In these and three other films this year, Chastain was able to slip comfortably and invisibly into her roles, creating narrative and emotional centers to films in every genre. – Brian Roan