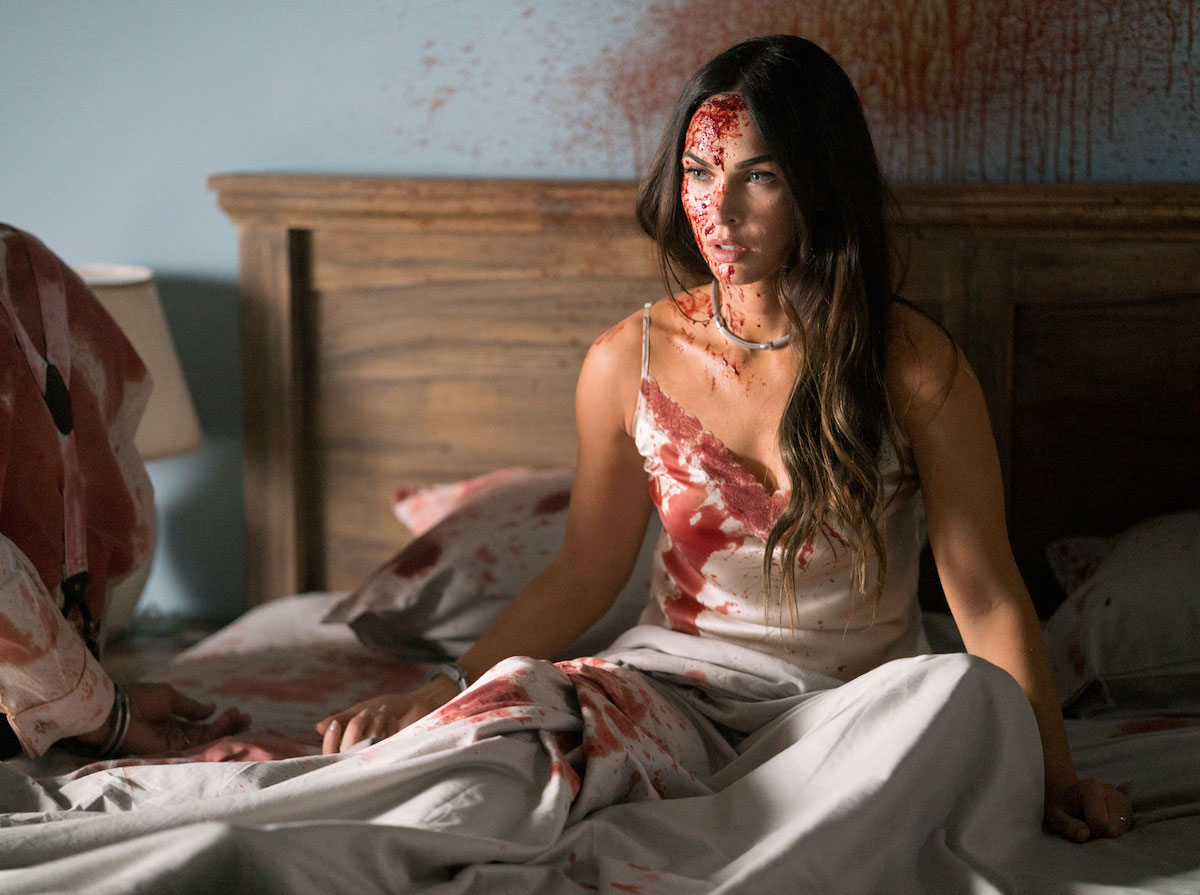 For its first act, Till Death tries keeping things muted. S.K. Dale directs his cast to deliver lines as if they’re somewhere between whispering and talking; cinematographer Jamie Cairney shoots with the brand of ruby-tinged glossiness that the last decade has really leaned into as a visual shorthand for wealth and privilege; dialogue from screenwriter Jason Carvey funnels us bits of exposition.

Emma (Megan Fox) was collateral damage in a botched robbery 10 years ago. She married Mark (Eoin Macken), a lawyer involved in the case, just over a year later, which went south. She turned to having an affair with one of Mark’s colleagues, Tom (Aml Ameen), but now she’s decided to cut it off. She even turns down plans to see Tom the next day, and when he asks why, she breathes while facing away from him: “‘Cause it’s my anniversary.”

This sort of dialogue continues, but it doesn’t really work—until an early turning point. Mark has taken Emma to a lake house; they wake up together, she finds herself chained to his arm, and he blows his brains out as revenge for her infidelity. The visual style turns colder, and now she has to escape from nowhere with his mangled corpse in tow. It’s a simple enough premise that functions in parts. It’s also one Fox elevates. The problem is that in trying to stir things up along the way, Till Death feels like something one wouldn’t expect: contrived.

Additional variables become added to the fray pretty quickly. Remember how the movie mentions that Emma was implicated in a robbery? The perpetrators, brothers Jimmy (Jack Roth) and Bobby (Callan Mulvey), are after her for reasons Carvey’s script makes clear in what seems seconds after introducing them. The dynamics are skin-deep at best, and attempts at layering Emma superfluous in execution, giving Fox less to do here than she really deserves. She’s Till Death’s anchor.

When the film does work it’s because she’s playing off herself as much as her environment. Fox comes alive when the movie gets to the meat, even letting some moments of dark comedy shine through as her performance’s underlying sarcasm complementing circumstances at hand. One through line this film flirts with is Emma coming across different obstacles Mark left in order to taunt her from beyond the grave. It’s here that a playfulness comes across, and Fox is a good fit for the material. Alas, Carvey’s script isn’t as coy as it should be; it even sidelines this particular concept not long after introducing it.

Tonally speaking, the closest thing instead comes from Jimmy and Bobby. The former is squirrelly, the latter a hard-ass. They’re foils to each other but not so much to the protagonist, functioning more as walking narrative devices to retroactively give Emma more depth. It’d be easier to forgive if it weren’t as transparent in practice. They, like individual sequences at hand, play more as pawns than pieces of a large whole. Which is in some ways fitting: the way to get the most out of Till Death is to enjoy it as a handful of set pieces that work well enough on their own rights.

It’s refreshingly void of pretense from that perspective and works in flashes for a majority of the 83-minute runtime, gaining steam in its finale. Dale rings as a more inexperienced director in how he works with actors—this is his feature debut—but he stages showier bits with a modest engagement. (It’s Sylvie Landra and Alex Fenn’s editing that sometimes trips up the flow if anything.) The final result is about as much of a time-passer one could make with this script and what must have been a small budget. Whether it’ll stick around more than a few hours after the credits roll is another issue. As is, Till Death isn’t all the way there.

Till Death opens in theaters and on demand on July 2.