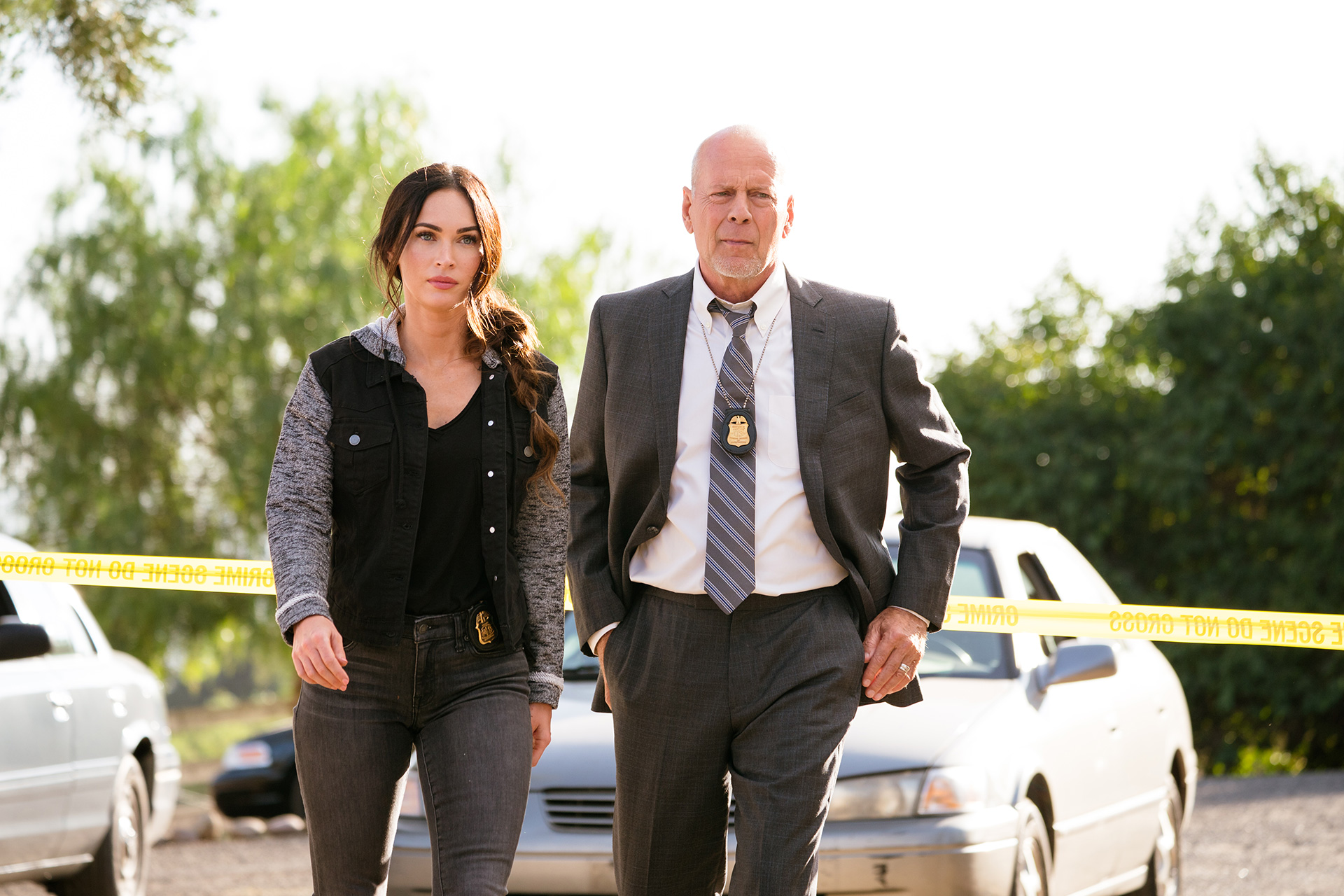 I think Bruce Willis’ agent needs a raise—they are going above and beyond to make sure their client gets A-list billing no matter what project he takes. I’d estimate the actor has about five total minutes of screen-time in Midnight in the Switchgrass, a majority of which is his FBI agent (Karl Helter) being a tired and soon-to-be-retired mother hen for his much younger and more driven partner (Megan Fox’s Rebecca Lombardo). It’s a cushy gig that probably put a few bucks in his pocket while somehow also earning him second-billing and foreground placement on the poster despite the real lead (Emile Hirsch’s state cop Byron Crawford) barely receiving his name at the top. Temper your expectations, Willis fans. It’s a glorified cameo.

What about the film, though? Written by Alan Horsnail and helmed by long-time producer and first-time director Randall Emmett, its story focuses on a series of disappearances. Young women are being abducted, raped, and killed in and around Pensacola, FL, but nobody wants to devote the resources necessary to find a culprit when the victims are mostly truck-stop prostitutes. Crawford is thus on his own when driving outside his jurisdiction to check the latest body for the same pattern of bite marks that has him believing a serial killer is on the loose. His boss wants him off the case, his wife wants him home, and his faith in God implores him to find closure for the grieving mothers to which he personally breaks the news.

Lombardo is working undercover to get scumbags preying on the same demographic off the streets. While Helter waits in the car, she’s entrapping online sex offenders to come to seedy motels and “have a good time.” Her focus is on one specific man, but he’s been a no-show for days thanks to unplanned interruptions (Machine Gun Kelly, playing a pimp in an uncredited role) and inability to wait due to her own superiors getting frustrated about the money they’ve been spending to save wayward souls. She and Crawford see a kindred spirit in each other upon meeting—someone willing to go the extra mile to ensure the next victim doesn’t get taken. They hatch an off-the-books sting themselves only to watch as their mark (Lukas Haas’ Peter Hillborough) kidnaps Lombardo instead.

Will Crawford find her in time? Will Lombardo escape? What about the other missing girl (Caitlin Carmichael’s Tracey)? Or Peter’s young daughter (Olive Elise Abercrombie’s Bethany)? There are attempts to make us think about families and sacrifice and collateral damage, none of it really landing since we never spend enough time with anyone to care about them outside how they service plot. Crawford is the exception by being lead and thus having room to deal with his emotions outside the chase itself. A scene with him telling Ms. Kellogg (Welker White) that her daughter is dead proves the best of the whole because it reveals his unyielding motivation without turning him violent, like Rami Malek’s character in The Little Things.

He wants to rid the world of this monster. Lombardo does, too, but she’s too busy being positioned as the linchpin connecting everything to shine as a three-dimensional person beyond “next victim” status. So we invest most in Crawford’s journey. We feel his desperation to not suddenly become the reason someone else dies rather than simply the guy who comes in after the fact to shoulder some of the pain. I wish Emmett didn’t go full ’90s police thriller with extended recap montages of moments we just saw under a manipulative score to remind us about what Byron is thinking while searching for answers, but the resulting overwrought drama fits the otherwise generic notes of a checkout-aisle paperback plot reliant on a lot of expertly placed luck.

And that is what really saves the day: it’s about a guy someone went to high school with who may have footage the police didn’t know to ask about. It’s about a transportation scheduler getting a guilt trip to throw protocols she initially seems ready to die for out the window. And don’t forget a perfectly timed escape attempt that buys just enough breathing room to lay the groundwork for what can only be described as the “best” possible trajectory when all is said and done. You almost feel bad for the actors expending so much effort to make us believe their psychological and emotional struggles; very little of their perseverance matters when placed beside the dominoes that have waited years to suddenly fall together today.

That doesn’t mean the acting is bad, though. Hirsch is good, albeit a bit over-the-top. As is Fox, especially when busting Willis’ balls for being too much of a “coward” to take the risks she’s only too willing to tackle. And Haas is probably the best of them all as the monster hiding in plain sight. The script seems to want to try and make us “understand” him as more than just a killer when he sings religious songs and loves his family, but it’s all noise considering what he does. Like Fox tells her real-life beau Machine Gun Kelly (they met during production) after his character tries to earn her sympathy, “We all got excuses.” We don’t need Peter to be “complex.” He doesn’t deserve that pity.

We should be worried about Lombardo and Tracey surviving. We should be worried about Crawford doing what needs to be done. Instead we spend way too much time away to give Peter context that adds little or nothing, besides the notion that “anyone can be a killer.” Where that sort of messaging might have been relevant three decades ago, however, you must only watch the nightly news to see now. Let him be a boogeyman (Haas effectively merits our ire) that must be stopped, not the intelligent “guy next door” who loves his kid. Horsnail and Emmett never provide anything that makes us question how we know everything will end anyway. So why not try to prevent your heroes from becoming pawns? Asset management matters.