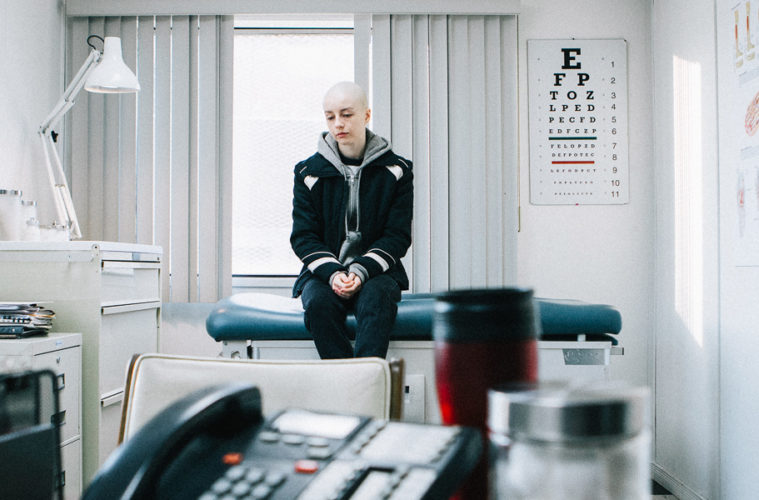 If a certain trend has emerged within the past half-decade of indie films, it’s the cinema of the grifter; very small-scale titles like Joel Potrykus’ Buzzard or Adrian Murray’s Withdrawn charting millennial malaise manifesting into economic malpractice. These films seem like a true meeting of form and content, as the desperate measures that come from living in a late-capitalist hellhole and the emaciated filmic settings of many low budgets perfectly complement each other. And White Lie, a film predominantly taking place in septic waiting rooms and halls with life-changing decisions depending on convenience store ATM machines, convincingly depicts a world in which one would take drastic measures. If anything, it’s a film deserving of serious praise for capturing how truly depressing Ontario can be in the wintertime–Hamilton’s landscapes haven’t been so vividly rendered since Olivier Assayas’ Clean.

Occupying this dead setting is Katie (Kacey Rohl), a university student we catch in media res in an elaborate scam: faking cancer. Having become somewhat of a campus celebrity with posters featuring the hashtag #Fight4Katie spread around its halls, there’s still a next step for her to take, or rather a finish line to cross. Hosting a GoFundMe to finance a trip to Seattle for an “experimental treatment” that can best what’s available from Canadian healthcare, Katie is, despite her celebrity, coming up short. And a serious crack emerges with one key person seeing through the ruse; her father (Martin Donovan, appropriately tired looking) who refuses to lend her the needed $2,000 for the treatment even after she presents a compelling sob story.

Despite the aforementioned septic quality or discordant musical score giving the impression of a capital A art film, the pleasures here are classical; say squirming in your seat as you see someone bluff their way out of a situation, whether it be to an anonymous figure or her worried girlfriend (and the only person we truly see her exploit) Jennifer (Amber Anderson). Shot and paced with a confidence lacking in much of contemporary Canadian cinema, one almost expects a thriller to break out any point, which is certainly more interesting than another local film regurgitating festival cliches.

Calvin Thomas and Yonah Lewis’ latest feature is genuinely pulling off something tricky, in that Katie isn’t defined as strictly likable or not, as what exactly she wants (well, beyond money or to feel a little important or loved) never feels truly articulated. Helped by a strong lead performance that’s neither too big nor too small (just look at the pitch-perfect pinched reactions from Rohl every time she’s challenged on her lie) the film maintains a strong sense restraint amidst all the deliberate discomfort. Furthermore, look at how it seems to carefully tiptoe around obnoxious social media commentary, as if always avoiding potential reactionary-leaning statements on victimization or trite statements on technology and the way we live now.

Though it gets a little less interesting as it inevitably heads towards a certain conflict, even with the interactions between Katie and Jennifer seeming to border on Fassbinder-like emotional cruelty. It’s here where we realize a bit of a limitation to the concept; as it seems to only have a few scenes or ideas to actually run through. It’s a film strongly conceived if still headed to somewhat of a foregone conclusion. But with all that being said, the acute sense of time and place will likely stick beyond any serious reservations.