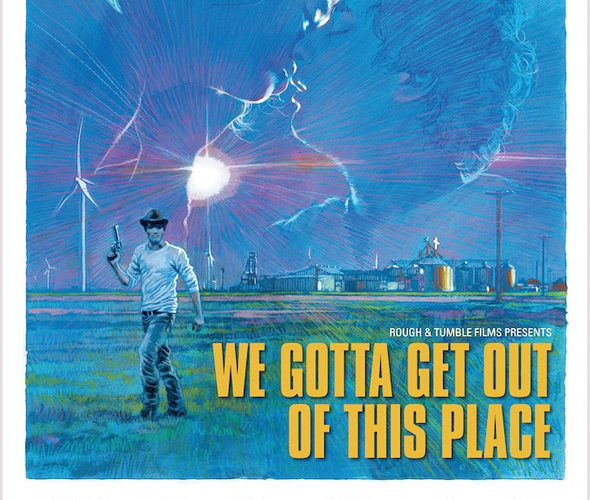 Life for Sue (Mackenzie Davis) and Bobby (Jeremy Allen White) in their sleepy blue collar Texas town is at an end. They’ve been accepted to college and can’t wait for the transition in hopes it’s the first step towards never returning. But while neither is sad about leaving families behind, there is one person they can’t help feel conflicted about deserting. BJ (Logan Huffman) is her boyfriend, his best friend, and the kind of guy whose heart is always in the right place despite his head finding it hard to follow. Less mad about his inability to join them than their refusal to stay, BJ decides to throw his friends a going away party with love and a dash of bile. His acquisition of the necessary funds, however, may make it so no one ever leaves.

The opening scene of Simon and Zeke Hawkins’ effective feature-length directorial debut Bad Turn Worse shows BJ pulling a one-man heist at an unknown location with an abundance of panache. As a groundskeeper lies sleeping in a chair, the teen brings an empty barrel to the middle of the field before filling it with gasoline and setting it ablaze. The ensuing inferno awakens the lax security so he can run to the fire in a confused haze with an extinguisher while BJ unlocks the safe, grabs three stacks of cash, and makes his way home. It’s a confident start of wordless exposition devoid of identifying details that earns our faith in believing the answers to its meaning will soon arrive in full. And they do indeed with a bang.

The cash belonged to BJ and Bobby’s hot-tempered cotton farming boss Giff (Mark Pellegrino)—a low-life criminal and disgruntled employee of the town’s mob boss, Big Red (William Devane). The homicidal psychopath is on the warpath when the boys arrive to work the morning after their final binger of the summer, threatening to murder the aforementioned gentleman who just happened to be watching the property when Big Red’s money was taken. As he brutally tortures his accused thief, the ever morally conscious Bobby can’t help from saying he stole it while BJ looks on in silence. The admission brings a sinister smile to Giff’s face as he tells his debtors he’ll cover the loss as long as they do something for him. Because they all spent initial cash, though, Sue must join them too.

It’s not hard to see the trio is embroiled in an unrequited love triangle, with obvious interest between Bobby and Sue growing now that the allure of being Big Man On Campus, BJ’s girl wears thin from her impending departure. Still friends and unwilling to compromise this fact, however, they hatch a plan to steal Big Red’s next shipment of laundered money from its cotton-mill hiding spot together in a fun, imagined dress rehearsal. Covering every detail, it’s almost airtight besides Bobby’s fear of it going horribly wrong. The pressure strains the threesome’s relationship as stress mounts to its breaking point, the result being a release of sexual tension for the soon-to-be co-eds while BJ unknowingly and accidentally listens to the two closest human beings to his heart rip it from his chest.

All bets are off at this juncture as unspoken feelings come out in threats of rage before Giff is allowed to join the excitement with a bit of physical torture to make sure he’s still getting his payday. Dutch Southern‘s screenplay opens up festering wounds as any sense of normal coming-of-age dramatic tropes make way towards a brutal crossroads possessed by the kind of violence and fear-mongering you’d expect in a town this chock full of dark, seedy secrets. There is a sense of finality at play too where you can tell these three might never meet again once everything is done despite romantic interests being fulfilled to skew otherwise. Bobby and Sue’s drive towards putting the past behind them is too strong and BJ’s yearning to preserve it a dangerous bit of deluded nostalgia. With an intriguing and humorous inclusion of Jon Gries as Sheriff Shep explaining the rules of blind justice, We Gotta Get Out of This Place comes to a boil after any escape from their fate disappears. Events transpire to teach us how BJ may be smarter than he lets on while fear creeps into Bobby and Sue’s faces, both estimating the completion of a situation they may not survive. Desperate for freedom from the physical and psychological hold this place has on them, whispers begin to fly as allegiances are made on either side to set up what will be a welcomingly grim climax. The Hawkins brothers steadily build the tension throughout by turning their characters’ happy optimism sour as their unbreakable bond of friendship turns duplicitous and traitorous with selfish desires for the future.

A taut thriller with assured performances from its central core, the film eventually finds itself exactly where logic would expect it to be. Davis and White give their roles a nicely cunning bite of home to offset their otherwise wide-eyed dreamers while Huffman’s disarming smile consistently allows others to underestimate his potential and determination. They keep the whole grounded in a foreboding sense of tragedy until the conclusion finds Pellegrino’s Giff shifting everything in a completely different tonal direction. Don’t get me wrong, his sarcastic I-could-care-less attitude and lack of morality is an entertaining highlight. The decision to have it takeover the entire film, however, couldn’t help but feel like a miscalculation tainting its gritty momentum. Cutting the extreme severity with such a large dose of his pitch-black levity simply left an odd taste I couldn’t shake.

Bad Turn Worse is currently screening at TIFF. Click below for our complete coverage.