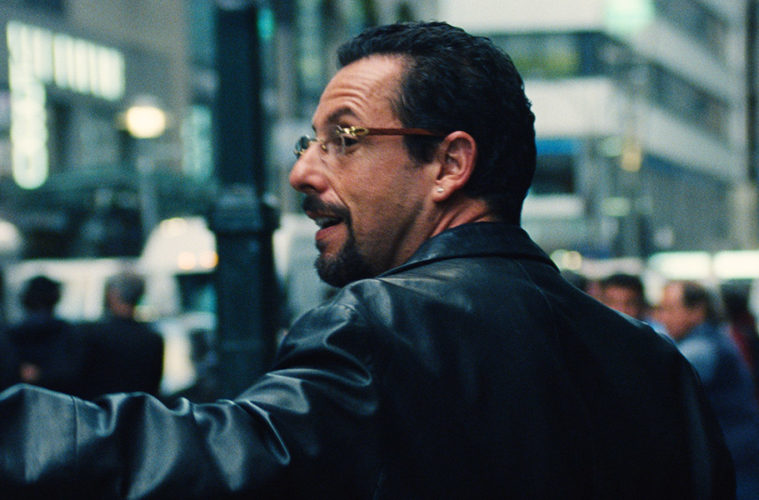 TIFF Review: ‘Uncut Gems’ Finds the Safdies and Adam Sandler at the Top of Their Game

There are two consistently pervasive ideas in the films of New York filmmaking duo Josh and Benny Safdie. The first is their clear affection for the art and craft of hustling. From their autobiographical drama Daddy Longlegs to their verité junkie film Heaven Knows What there’s a reliable focus on the often thrilling process of social manipulation and coercion to point where stretches could briefly be mistaken for a con man film if it weren’t for how they never lose sight of how these actions intersect with economic class. For people on the margins of society it is not just a skill but a tool of survival, which is especially true in their moody and expressive 2017 feature Good Time which saw Robert Pattinson’s Connie spend an entire evening engaging in increasingly desperate transactional interactions all across New York in attempt to bail his brother out of prison. That desperation is precisely what forces them to hone their craft.

The second is the inherent pain and sadness caused by it, the rippling damages—and sometimes physical harm—of weaponizing relationships as potential resources and ignoring the real people on the opposing side of them. In Daddy Longlegs, the precarious lifestyle of Lenny (a character modeled after the Safdie brothers’ own father) is empathized with, his clear affections and efforts however eventually rub up against his increasingly volatile and horrifyingly irresponsible decision-making as a parent. In Good Time there’s not a single space or person that comes into Connie’s orbit that isn’t soon selfishly abused. The film opens with him convincing his mentally-disabled brother to rob a bank with him despite knowing the brother isn’t capable of understanding the consequences (which is why the brother needs to be bailed out of prison) and ends with him having caused the death of someone just as poor and desperate as himself. This is all a long-winded means of saying that their latest film, Uncut Gems, is a near-perfect distillation of these two ideas that dominate their work packaged in a way that is as light-on-its-feet as it is deceitfully upsetting.

The film opens with a prologue set in Ethiopia (uncharacteristic for the New York duo to leave the city), which briefly details the visual allure of diamonds with a cosmic tracking shot that literally moves through them while Oneohtrix Point Never’s electronic score soars. Yet not before also acknowledging the violent, exploitative conditions of mining them; visually tying the allure and exploitation together in a way that serves to instructively color the events we’re about to see unfold. Which brings us to Howard Ratner (Adam Sandler, at the absolute top of his game), a New York City diamond runner in the year 2012 loosely based on the Safdie brothers’ father’s stint in the Diamond District. Howard runs his own jewelry shop where he sells expensive rings, watches, earrings, necklaces, and chains with gold-plated, jewel-encrusted Furbies on the end of them. He’s hundreds of thousands of dollars in debt, a fact he frequently forgets because his work sees him deal such large quantities of money and he is constantly engaged in the hustle which gives him a misguided sense of power and safety.

Howard is a complete whirlwind of concentrated compulsion and will, all at once, having an affair with one of his young, promising runners at work Julia (Julia Fox), supposed to be getting a divorce from his wife (Idina Menzel, hilarious in all of her exhausted knowingness) shortly after Passover, fending off his brother-in-law (Eric Bogosian)/cabal of hired muscle he is in debt with for over $100,000, and of course planning the auction sale of the titular uncut gem which he purchased from some Ethiopian Jews seen in the prologue. However things get even more complicated when his street hustling colleague (Lakeith Stanfield)–who is trying to sell knockoff Rolex’s out of his shop–introduces him to Boston Celtics power forward Kevin Garnett (now retired, but playing himself in 2012 when he was still active) who happens to be mesmerized by the diamond, and because Howard is both a huge fan of the national champion basketball player and a gambling addict he lets Garnett hold onto the rock for good luck for the game he now plans on betting on.

There’s actually no better indication of Howard’s craft than this scene, the way he fast-talk negotiates Garnett into letting him take his 2008 Championship ring as collateral for borrowing the diamond and then immediately walks over to the pawnshop where he proceeds to trade it in for cash collateral that he can use to bet on the Celtics game that night. Needless to say that decision has rippling consequences and whereas Good Time dropped us in as Connie began the adrenaline-inducing process of digging himself deeper and deeper, Uncut Gems feels like something older and wearier; there’s an entire history implied in the way Sandler interacts with the people in his orbit that makes clear he’s been doing this for far too long already and the cracks have been showing long before the cameras started rolling. He’s not the only person playing the game and he’s far from the best anymore, even if he’s frequently the loudest.

The Safdies and legendary cinematographer Darius Khondji condense Howard’s world into an anxious, claustrophobic, ground-level handheld mess of 35mm textured, controlled chaos; the camera moving through these richly layered and choreographed scenes of Howard frantically and farcically trying and failing to manage all of his spinning plates in increasingly uncontrolled spaces. Sandler is a ball of tempered impulses as characters are constantly talking at and over each other in a way that makes the sound design unbearable, and the way all these stories overlap and interact with each other frequently borders on slapstick—there’s one in particular that sees Garnett, his crew, Julia, the debt collectors, and unhappy customers all hit his shop within seconds of each other that is a complete riot.

Sandler delivers one of his very best physical performances as Howard, making us genuinely feel every heated exasperation and crushing failure of his as he schemes and sweats his way all across New York City streets, cabs, and venues in garish Gucci shirts and loafers. At one point he physically flees his daughter’s school play, greeting her backstage as he literally runs away from bruisers sent by the debt collectors planning on stripping him naked and beating him—a great gag complicated by the threat violence. And beyond just the beating he’s about to receive that opening scene of violence still lingers too, leaving us with palpable tension as we’re left to watch Howard’s volatility, irresponsibility and neglect stack and all his plates begin to crash one-by-one.

There’s a real sense of melancholy to Howard whose panicked insecurity and determination draws in our sympathy in a way that never excuses his overt rancor and carelessness; the terrifying bit in the climactic gambling high where he calls his wife is incredibly revealing. And there’s also a larger ethnic detail to the film in a way the Safdies have previously never dived into as overtly as they have here. The way Howard’s Jewishness interacts with not just the fact that a lot of his clients are African-American but also the historically discriminated Ethiopian Jews who provide the titular gem and a sense of mystical connection for Howard and Garnett gives the film a real sense of historicity (Garnett at one point even suggests Howard’s culpability in exploitation), the hustling-as-survival of previous Safdie films registering this time on less of a literal class level than on a more systemic, symbolic one.

However by only ever implying this scope and approaching this story on such an intimate level for so much of its running time, Howard’s personality overpowers reality for so long that when reality finally hits it is genuinely shocking and painful; and the film reveals itself to have been less about Howard than it was about observing the kinds of people who are drawn to and harmed by a troubling industry of stylish surfaces that distract from the violent inner workings that allow it function.

Uncut Gems screened at the Toronto International Film Festival and opens on December 13.