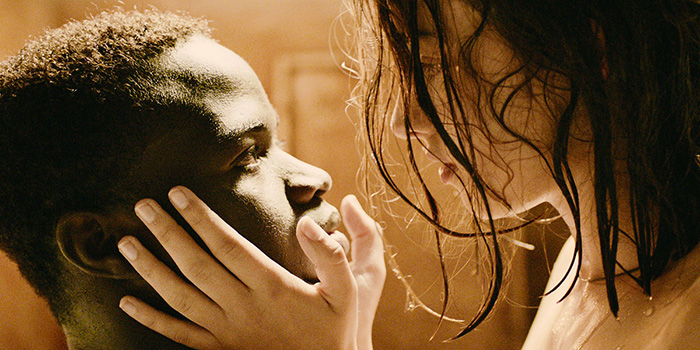 Two strangers running from personal demons collide at the start of Laura Luchetti’s Sardinia-set Twin Flower. He (Kallil Kone’s Basim) is an Ivory Coast immigrant desperate for money yet unequipped with the correct paperwork to earn gainful employment. She (Anastasiya Bogach’s Anna) is desperate to escape a pursuer (Aniello Arena’s Manfredi) seen in duress but no less determined to get his hands on her eventually. They’re both alone on the open road, unsure where to go besides knowing it must be anywhere but here. A bond will form as a result, a union of friendship with the potential to blossom into more if they’re able to let down their defenses long enough to try. With Manfredi forever on their tail, however, freedom remains a distant dream. Their stories are told via brief vignettes of present events tempered by flashbacks to gradually reveal what we already know despite hoping to be proven wrong. Most of it is a struggle before they meet in an abandoned parking lot. Most depicts the hardship they face despite kind hearts stuck in horrible situations. Deciding to stick together gives them purpose and a companion, though — a reason to stop running if only for a little while. Basim becomes Anna’s protector and voice while she becomes the breadwinner thanks to an old flower shop owner (Giorgio Colangeli’s Fioraio) giving her a job. With a deserted house as a place to lay their heads, food and security allow much-needed reprieve. Unfortunately it doesn’t also erase the troubled pasts they cannot shake.

Anna’s refusal to speak due to an as yet unknown trauma leads Luchetti into flashbacks of her and her father (Mauro Addis) during better days. We learn about his job, their connection to Manfredi, and eventually the incident that sent her running. These glimpses also reveal what it is she yearns to reclaim. She believes Basim can help even if he may not agree considering his own secrets. Both worry the darkness that follows them will lead to the other leaving, their shame and fear palpable enough to derail the easiest of laughter into somber looks of uncertainty. We grow as anxious to discover blossoming love between them as we do Manfedi’s inevitable discovery of where they are. The journey is physically and psychologically punishing, but together they just might prevail. This may not seem like much by way of plot, but it definitely gets the job done considering what we still need to learn about our leads. Rather than get bogged down in action and conflict, Luchetti allows her characters the room to grow alongside each other with their own internal wars supplying more than enough intrigue until Manfredi finally knocks on the correct door. She has written these two teens with depth and sorrow to make every interaction meaningful towards understanding who they are as individuals as well as a single entity. How do they respond to the kindness of strangers and the anger of others? How do they risk their delicate balance to inch closer and show exactly how they feel? Nothing is rendered easy.

The honesty of this truth is what lets Twin Flower shine. While what happened in Anna’s past provides Manfredi motivation and the cause of her fear, it isn’t the main story. He’s but one detail of many (admittedly the biggest) that pushed her onto a path towards Basim. The same can be said for the supermarket security officer giving him mixed signals and setting off warning flags. He forces Basim into a corner that he believes is an ends-justify-the-means scenario until Anna can show him another way. And thanks to altruism big (from Fioraio) and small (from Fausto Verginelli’s Stella), they’re able to stay afloat long enough to see an exit. Right when they thought they’d be alone forever, they discover they might never be alone again. Bogach and Kone must therefore carry the emotional load on their shoulders throughout and they do so without a false move. It helps that her Anna doesn’t speak because it makes sure we pay attention to her expressions and those of Basim in response. More conversations between them are silent than not, their trust and understanding coming through body language and desire. That’s not to say it isn’t fun to watch Kone work his verbal magic to let charisma earn a smile, just that his and Bogach’s eyes are able to say so much more. We watch their trepidation wash away and their connection grow exponentially due to their shared mutual weight of a dangerous unknown. They give each other space to restore personal agency and unite for additional strength.