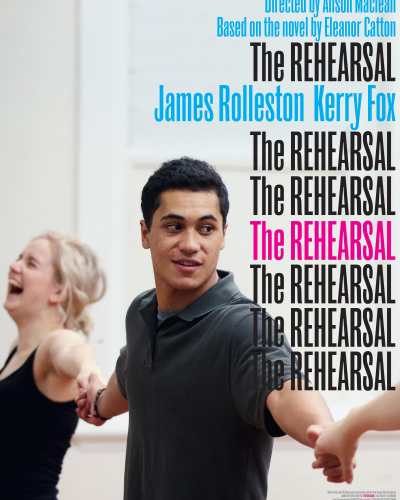 After a 17-year hiatus from directing feature length films, Alison Maclean returns to the screen with The Rehearsal, an adaptation of Eleanor Catton‘s acclaimed 2008 novel. On its surface, it looks like other films in a specific, youthful sub-genre that rarely produces particularly insightful or interesting dramas. However, its visual precision elicits a unique mood that elevates the film from the normal, self-important teenage tale.

The most fascinating moments play out as we’re shown the inner workings of the fine arts academy that Maclean places us in. The Head of Acting, Hannah (played masterfully by Kerry Fox) commands a lot from her young students in terms of acting prowess and also building an intimate, familial environment in the institute. This is examined through intense  and personal acting classes interspersed throughout the greater narrative. Maclean works with cinematographer Andrew Commis to make these scenes feel claustrophobic and weighty while also breaking away from the story in a way that is often shocking and jarring.

At the institute, first-year acting student Stanley (James Rolleston) finds himself overwhelmed at first, but as he befriends his roommate William (Kieran Charnock) and other students, he learns to relax and settle into the extreme environment of the school. On the bus one day, Stanley meets a young local girl, Isolde (Ella Edward), and the two connect romantically, which contributes to Stanley’s growing confidence and comfortability at school. Back at school, Hannah puts the students in groups for a year-long project to produce, write, and perform a play to be shown to agents and industry types. Stanley, William, and a few other students choose to adapt a local story about Isolde’s underaged sister, Thomasin (Alice Englert), and her tryst with her tennis coach.

Despite the high stakes, the drama in the film is often lost behind a mismatched tone that undermines the moral complexity in favor of aesthetic. The distant, almost bleak atmosphere that works so well in the rehearsal and class scenes detracts from the emotional wave presented in the more straight-forward drama and puts the film at odds with itself. It is clear that Maclean is trying to explore ethics and its relationship with the student and teacher’s passion for the arts, but the drama is underdeveloped as we cover the entire school year rapidly. Perhaps a more omniscient perspective would’ve benefitted as Stanley is the only character we genuinely invest in and William, Isolde, and Thomasin’s roles are too delicate to be left on the back burner and are ultimately mishandled.

The intrusive nature that works so well in the more performative scenes of the film illustrates how passionate the students are and it never seems as if the students are pushed over the ledge. Yet, this becomes a theme of the story in the second act so a handful of subplots are completely undeserved and glazed over. A pivotal scene that should’ve operated as a tearjerker only produced apathy and confusion because the students’ stress wasn’t demonstrated in a clear way.

However, the strong cast of young actors and Kerry Fox never lose presence and pertinence. Even the smallest roles show characterization, even if the camera can’t find a way to display this. Rolleston shows great ability as a young actor and is given a lot to work with between his assignments at the school and also a subtle maturity that develops as the drama progresses. Charnock plays the film’s most complicated character, one who hides behind his sense of humor but also quietly reveals himself through his lightness. As mentioned, Fox is the stand-out of the cast, balancing a difficult combination of maternal and stern, working as a moral compass while pushing students out of their comfort zone.

The Rehearsal doesn’t have the urgency of a great young adult-oriented film, but it still boasts impressive technical work, a collection of remarkable performances, and well-composed imagery. The surreal, provocative fictionalized account of Thomasin and the tennis coach’s affair that is sampled throughout shows an incredible vision that is lost in a narrative shuffle. The Rehearsal is always captivating, but not always coherent, which will entice some and turn off others. The zeal of the cast and crew translates to the zeal of the characters, which makes the experience worthwhile even if the spark it leaves doesn’t have the same fervor.

The Rehearsal is currently playing at the Toronto International Film Festival.