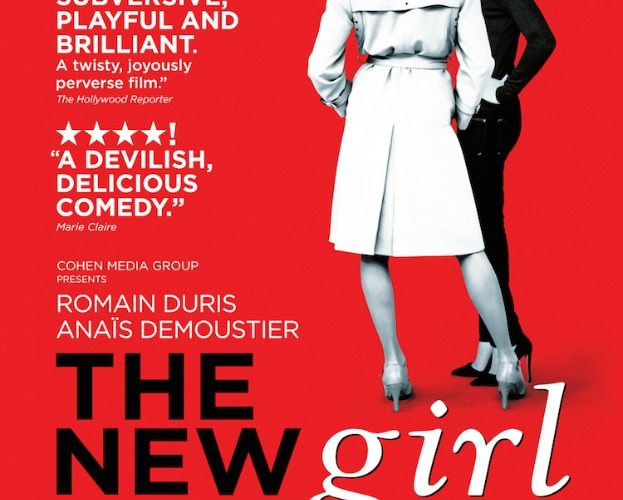 There is a vast spectrum between the most insensitive and compassionate cinematic portrayals of cross-dressing, and François Ozon’s The New Girlfriend aims somewhere down the middle. But much like his hero(ine), Ozon strains under the weight of this balancing act. The movie is surely fated to endure a wave of think pieces targeting its alleged transphobia; although there’s some merit to such charges, Ozon at least partially staves off criticism by making an open question of whether David (Romain Duris) fully asserts his gender identity in the form of alter ego Virginia, or just really likes dressing up. (To be fair, even asserting ambiguity here is politically charged, so I’m sympathetic to Ozon’s navigation of these waters.) The movie also wisely curtails an early conflation between cross-dressing and death, as David uses dressing up as a substitute for a real woman—his deceased wife, Laura (Isild Le Besco). But these are not so much successful pre-emptive measures as instances of Ozon’s intentions clashing, which are too numerous to count. I’ll be the first to stress that sensitivity does not necessarily make for good cinema, and vice versa, but when The New Girlfriend is offensive, it’s also stupid. Chief among these instances are muddled characterizations. Virginia’s level of self-awareness vacillates wildly—she’ll say, “I’m not attracted to men at all” and cop to considering gay sex in the next breath, and Ozon seems all but indifferent to the contradiction. Totally disparate, too, are a flamboyant Katy Perry-scored shopping montage and a tense depiction of Virginia’s anxiety dressing in public, as if the two share no overlap. When Virginia insists on choosing a dress because her “legs need to breathe” in between panic attacks, it registers as a wink to the viewer, rather than a psychologically credible aside.

Claire (Anaïs Demoustier), ex-best friend of Laura, who accidentally discovers Virginia in the throes of standard-issue grief tropes, doesn’t fare much better. Claire’s disgust with Virginia turns into boundless enthusiasm quickly, and the latter manifests as curiosity, platonic companionship and sexual obsession seemingly at random. (One of the film’s least convincing suggestions is that Claire’s sexual interests change instantaneously after meeting Virginia.) This would work if Claire were intentionally opaque, but she is as clearly our identification figure as Virginia is the Other. Because Claire’s fetishism of Virginia is expressed so clearly and frequently, it is inexplicable when she corrects Virginia late in the film by suggesting that “Laura brought [them] together,” when that is so clearly not the case that the only fathomable response on Virginia’s part would be to stand there, mouth agape.

The film doesn’t even seem to know whose idea the transformation is, or why power would play an important role in a friendship fraught with S&M variables, imbalanced privilege and unspoken desires. These aren’t so much parts integral to a whole as marks on a checklist of possible approaches. The New Girlfriend is perhaps best experienced as variations on a theme, rather than an organically developed story; I just wish that were the experience Ozon had intended.

The New Girlfriend premiered at TIFF and opens on September 18th, 2015.