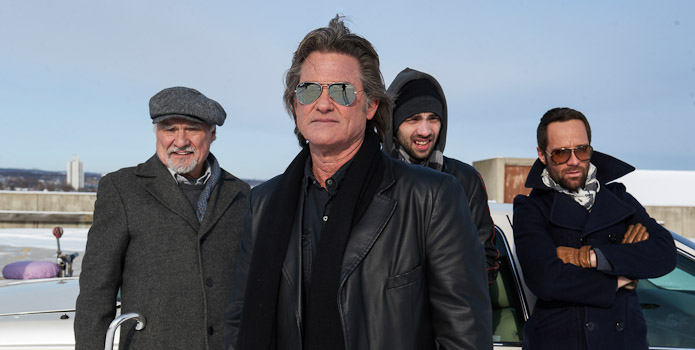 [TIFF Review] The Art of the Steal

When you’re looking to create a successful heist flick it’s usually a good idea to keep things simple — make everything as airtight as possible, don’t try for too many twists and turns, and maybe throw in a double cross to add a bit of intrigue. This is something that the underrated television show “Leverage” excelled at, allowing its stellar cast to shine above its crime of the week formula. When the theft itself is a foregone conclusion and you know it will all end in a winking smirk, you’ll find that the ability to merely enjoy the players doing their thing proves much more enjoyable than some convoluted ordeal hiding plot holes with even more outlandish plot holes.

I didn’t think Jonathan Sobol‘s The Art of the Steal would be one of these gems when I sat down to watch. Heck, I didn’t think it would be halfway through. There’s a lot of flash aesthetically, overindulgence with transition cards labeling every new place and character introduced, and a sprawling central cast with a myriad of personalities. In other words, the film was anything but simple—a veritable shell game of subterfuge via voiceover and sarcastic interactions explaining its overload of information. It’s the perfect distraction, lulling us into a sense of obvious cliché until we discover the truth is even simpler and, dare I say, smarter. And while most of the heavy lifting does occur in the final fifteen minutes, the excess helps keep the journey light and fun. Sobol ensures we’ll know what’s in store by a time traveling piece of exposition told from the perspective of de facto lead Crunch Calhoun (Kurt Russell) as he enters the Warsaw prison cell he’s about to get to know very well. We learn he’s the wheel man for a band of art thieves led by his half brother Nicky’s (Matt Dillon) brains and supported by Paddy’s (Kenneth Walsh) fencing contacts and Guy’s (Chris Diamantopoulos) expert forgings. Full of slow-motion, half jokes, and Crunch’s dejectedly foreboding phrase of “Oh, boy” with every new horrible discovery that his time in Poland will be memorable, the stage is set for the embellished visual style and surprisingly consistent comedy to follow.

As for the plot, Crunch is shown enjoying retirement post-prison as a stuntman in Niagara Falls with a younger woman on his arm (Katheryn Winnick‘s Lola) and an apprentice at his side (Jay Baruchel‘s Francie). Always one to trust those around him until they let him down, it’s Nicky’s unwanted return to his life that brings him back into the game. You see, Nicky is the one who ratted him out in Poland to save his own skin. While blood and family allow the sentimental and naive Crunch to still love his brother, the trust is gone. Paddy has a new score, though, and the gang is itching to get back together. So differences are put aside and everyone converges in Canada to hatch a plan that will see them stealing a priceless Gutenberg printed book from an international customs facility.

On top of any misgivings the crew has in Nicky lies the fact that an Interpol agent (Jason Jones’ Bick)—with a convicted art thief working off his own sentence in tow (Terence Stamp’s Sam)—is hot on their trail. Who’s to blame for the heat? Why, Nicky, of course, after he duped the authorities by transporting a Georges Seurat right under their noses. Being that this is all just the first act, you can see what I mean over stimulation. There’s so much happening that you won’t be blamed for simply following along as everything unfold in its own due time. I rarely get the chance to do this, as it only takes one lull to start hypothesizing the grand plan. I’m happy to announce I was taken by surprise here, if only because those involved kept me engaged throughout. Credit goes to its stellar cast of comedic talent. Stamp is a sardonic straight man to Jones’ buffoon with a wealth of hilarity resulting. Diamantopoulos’ voice artist background helps his over-the-top Parisian perfectionist come to life; Walsh is a riot brimming with smug Irish confidence; and Dillon hits his stride as the cocky manipulator who always believes he’s five steps ahead of everyone else. And while Russell steals the show with his likable fool full of witty quips—something I had my doubts about at the start—Baruchel delivers the most memorable bit as a ball of nerves crossing the border into Detroit. It’s a priceless sequence that provides one more deflection to keep us entertained and enough to not ask too many questions about what else is going on.

While neither the smartest nor the funniest film, it does give enough of both to warrant forgiveness. Some of the visual flourishes go too far and many of the flashbacks or reenacted stories become more self-parody and easy joke than crucial plot points, but it all fits the tone of being a little left of realistic. There are some cues that made me think Kiss Kiss Bang Bang without spilling into complete meta-narrative voiceover and the format itself does recall the Ocean’s films in scale, yet the best comparison is with “Leverage.” Every criminal has a specific skill set, shares a bitingly sardonic rapport with the others, and consistently stays on task with motivations towards fortune. The Art of the Steal delivers everything you expect and finishes with a little extra to earn one last smile.

The Art of the Steal screens at TIFF on September 11th and 12th. Watch the trailer above and see our complete coverage below.