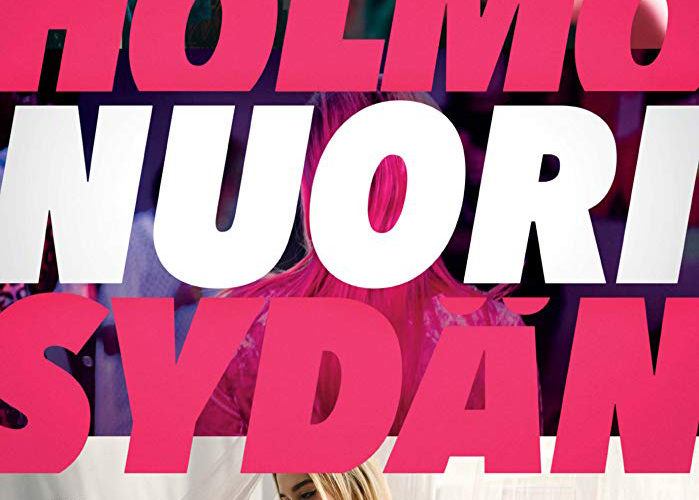 It was fun to laugh back in January when Donald Trump spoke to the media about how he wanted fewer immigrants from “shithole” countries and more from the likes of Norway. We laughed because it was obvious what the difference between the two was for him, but there’s a growing trend towards radical right populism and nationalism over there too. Just as Nazis have come out of the woodwork in America under their rebranded moniker “alt-right,” nations such as Finland have been combatting their own fair share of racial unrest targeting Muslim immigrants. And while you wouldn’t think so at first, Selma Vilhunen’s latest film Stupid Young Heart depicts the resurgence.

Before this underlying trend infiltrates Kirsikka Saari’s script, however, the story arrives as a document of young love and responsibility between Lenni (Jere Ristseppä) and Kiira (Rosa Honkonen). The two prove an odd match in conventionally stereotypical terms: he the scrawny skateboard punk and she the popular dance team captain. But a few weeks back they hooked up nonetheless. Lenni’s friends joke she was drunk in a bid to get a rise out of him considering he’d had a crush on her for two years previously. And we’d almost believe it if not for the fact that she doesn’t put him down in a show of superiority when he arrives uninvited to her practice. She declines his invitation to hangout, but she never comes across as mean. The reason for her cautious trepidation is soon revealed: she’s pregnant. It’s the type of news that puts their teenage lives and maturity in perspective, the kind that gets emotions amped up thanks to adolescence and the additional stress of what keeping the baby means. Lenni’s mom is barely home, though, so his only outlet for advice is his best friend’s older acquaintance Janne (Ville Haapasalo). Kiira’s mom is so wrapped up in caring for her three brothers that any response automatically causes a rise in the young woman thanks to the chaos. The only people they can truly rely upon are each other and that can hardly be enough considering their age. They’re an impressionable, hot-tempered flake and self-centered drama queen respectively. But they are in love.

So we watch them test the waters. She pushes him to find his threshold for independence and he has a difficult time keeping his opinions to himself. There are many starts and stops to their relationship because they’re too young to truly have the patience for the kind of compromise their union would demand. Lenni is deluded into thinking he’s owed a job simply because he’s willing to do whatever it takes. Kiira unrealistically believes they’re home will be minimalist chic at a price on the low-end of high-end thanks to her limited scope of what the world costs. And both believe themselves to be too proud for welfare assistance. They’re white, European, middle class citizens who’ve received just enough to never know what it means to suffer.

This is our initial introduction to the identity politics and social class rhetoric to come. We don’t think twice about Lenni’s kind neighbor Abdi (Abshir Sheik Nur) or the fact that Janne has a bald photo of himself on what appears to be a wrestling mat. Saari and Vilhunen sprinkle details in to create atmosphere as well as set up conflicts still forthcoming, this town gradually opening up around what had felt like an insulated story of teenage parenthood. Suddenly we meet a group of Somali immigrants outside their marketplace mosque next to the furniture store where Kiira shops and the gym where Janne fights. Bigotry is heard from the mouth of Lenni’s mother and opinions begin to spill forth that can’t be put back in their bottle. And the transformations start occurring at breakneck speed once the pregnancy reaches its final month. Tensions rise to the point where these kids can’t simple smile away a tough conversation. The real world is coming at them fast and furious and they’ve nowhere to turn. Kiira wonders if she’s on an island alone because of her tendency to push those who care away. Lenni begins to think he’s sacrificing his identity and losing his mind with no one in a position of authority besides a soon-to-be-revealed neo-Nazi filling his head. Aggression and sorrow arrive in equal measure to turn every little squabble into a federal offense and the outlets used to let loose are balanced on a tightrope precariously positioned underneath a guillotine ready to descend.

The filmmakers do well to create this timely and important scenario around their central drama in a way that never overpowers the character study behind both. They don’t use the baby as a pawn to be politicized either save one brief scene dealing with abortion. Instead this unborn child becomes a metaphor for the best parts of its parents. When many other films would use teenage pregnancy as a cautionary tale for celibacy, Stupid Young Heart allows it to be the potentially beautiful miracle that it is with adults. If not for this baby connecting these two lost souls going down paths that lead who knows where, things could be much worse. So when it appears all is finally lost, we know recovery remains possible. Credit Honkonen and Ristseppä for this truth because they’re wonderful in their roles. They brilliantly travel between their struggles and entitlement, always attempting to have the best of both their worlds (youth and parenthood) despite one constantly being the antithesis of the other. It’s easy to forget Honkonen as the second lead, but her growth and maturity can’t be undervalued. Ristseppä by comparison receives the heavier role with Lenni’s mind and heart being pulled in so many directions that he’s able to so vehemently blame innocent strangers for his own missteps and failings. And yet through it all they can find each other’s eyes and look past the posturing and fear. No one knows what the future has in store, but having each other gives them hope.

In the end the baby does more than wash their personal suffering away. Ultimately parenthood is the single topic we as human beings can agree upon. We argue about race, religion, and sexuality until we literally take up guns in some delusional show of virtue. We look at each other and lump good people into groups judged by their worst minority and lose ourselves to the misdirected rage that conjures. But if you are distraught about your child or worried about the unknown he/she will bring, there exists a universality that transcends any differences. It’s a bond many exploit (“As a father of daughters I abhor misogyny”), but also one that unites. If children in cages aren’t enough to expose the real enemy, you’re probably already lost.