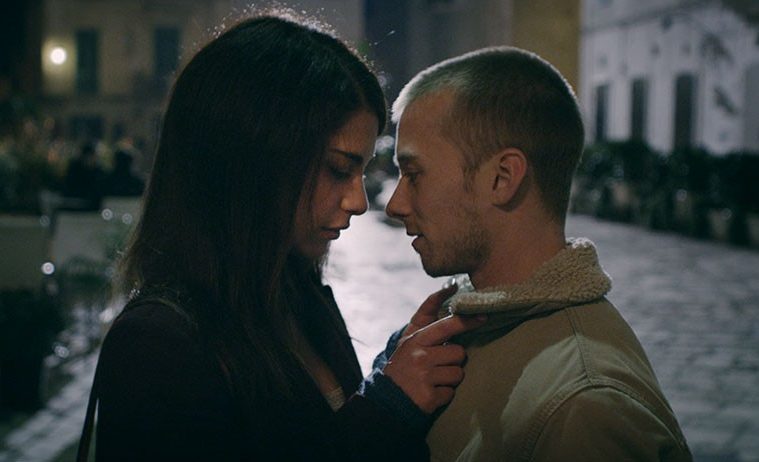 The first words in Colin Geddes’ TIFF description for Vanguard selection Spring are, “Before Sunrise gets a supernatural twist.” Naturally, I pushed everything aside to check out what it could mean. A horror romance from Aaron Moorhead and Justin Benson, its Italy-set journey of an American lost and alone proves equally suspenseful, grotesque, funny, and beautiful. The best part, however, is its smart and sensitive way of allowing the dark fantasy to enhance its love story rather than overshadow. Because at the end of the day, what’s onscreen isn’t necessarily out to scare us—although it will. Instead it shows love’s power to literally reinvent ourselves into that which we didn’t even realize we wanted to be.

Where Evan (Lou Taylor Pucci) is concerned, becoming anyone else would be a step in the right direction. An only child whose mother was diagnosed with cancer shortly after his father passed away, returning home to care for her in her final days lands him selflessly working at the neighborhood bar he always told himself he never would. Inevitably, the pain and anguish boiling for too long rises to the surface in a fit of rage. It only turns a horrible existence worse once the psychopath he punches circles his block at night and the police knock at his door. Needing a change of scenery to remove himself from the chaos now that the only person worth staying for is best friend/local screw-up Tommy (Jeremy Gardner), he grabs his passport and books a flight to Europe. What was a conventional drama shot in gritty darkness with heavy emotions turns its sights on a vibrant and fun Italy thanks in most part to a hilarious supporting role by Nick Nevern as tourist Thomas. Loud and crass, he and his friend take Evan under their wing to show him a good time. And they do even if their drunk partying mindset has a tendency of making him question his decision to join their debauchery. Recalling Hostel and its first act calmly setting the stage for craziness to come, this portion of the film nicely escalates the comic relief as the Brits laugh at their new chum constantly swinging and missing with the fairer sex. Once Evan catches a glimpse of Louise (Nadia Hilker), though, nothing will prevent him from securing a date.

So Thomas leaves for Amsterdam and Evan seeks a place to stay to ensure he’ll run into this vision in a red dress again. Deciding on the farm of an elderly widower named Angelo (Francesco Carnelutti), he works during the day, gradually improves his broken Italian, and keeps his head on a swivel for Louise until noticing her on the way to a museum. This is where the Before Sunrise comparison arrives—two young souls wandering a European city with smiles on their faces as they size one another up before falling hard and quick. Rather than introduce a time limit to their romantic tryst with one needing to begrudgingly leave the other, Moorhead and Benson show that Louise may be a ticking bomb ready to devour Evan as her unsuspecting prey.

Spring hits its stride as we watch where she goes after leaving him suddenly and sick each night. Dead flesh is shown rotting her appendages, primordial transformations take shape, and when her contorting body stumbles past a tiny animal she lunges for the meat. Utterly creepy and visually arresting, we watch these encounters in the shadows with a sense of urgency as Evan goes home for the night happy. Is the love between them enough to stop her appetite? Will whatever drug she injects to quell the tumult run out before what’s happening takes over? And since every kill cuts to the light of the next morning with her victim naturally decomposing amongst Mother Nature’s parasites hungry for leftovers, how long before Evan discovers what she really is? If this were a Hollywood movie—Moorhead and Benson financed Spring independently by riding bicycles to meetings with investors during festivals—the ever-changing monster we know Louise to be would have begun killing humans for no other reason than that’s what monsters do. This duo isn’t interested in empty causality to show carnage and call it a day (although the special effects are stunning nonetheless). They’d rather question what happens when love at first sight strikes a pair of damaged souls on the cusp of one’s supernatural/science fiction metamorphosis. How does love change them? How does it infer upon what they’ll accept to remain with the person they wish to never lose? And if there’s only have one night left together, could they risk their life on the off-chance love exists on a molecular level to stay?

We’re therefore asked to look beyond the monster and see two people who cannot help themselves no matter sanity’s begging. Louise’s “affliction” can be construed as a convenient device. Perhaps one constructed to comment on true love by separating heart and brain and giving the former control, but it doesn’t take much to also buy into its romantic notion and see everything as an opportunity for hope in a darkened world. Evan has always lived for others and Louise only for herself, so the ability to reverse those sensibilities and remain together regardless of price is powerful considering their respective baggage. Hilker and Pucci render their outlandish situation into an authentic depiction of love’s highs and lows until the nightmarish elephant in the room becomes no different than real world hiccups we’re each capable of erasing if given a reason.

Just as we fall for their characters falling for each other, Benson’s metaphorically resonate script providing their space to emote is matched visually by Moorhead’s cinematography. Whether static aerials showing rotting corpses with snakes slithering through them, the shallow depth of field focusing on exactly what he wants us to see (showcasing Louise’s delicate balance between life and death with budding and withering flowers animated along her path), or a magnificent long take of Hilker following Pucci as he works his frustration out through the winding cobblestone alleyways of Apulia, the sense of place becomes a character in itself. Add the in-close cropping of creature effects and you get a genre film unencumbered by genre aesthetic. So if you’re someone who believes horror is mood, gore, and little else, Spring proves its validity as legitimate cinematic art.

Spring premiered at TIFF. See our complete coverage below and the trailer here.