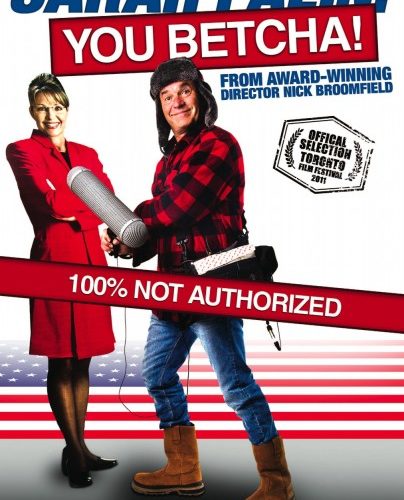 Filmmakers Nick Broomfield and Joan Churchill set aside a personal bias and the picture that emerges of Palin in this documentary is not flattering, in fact one could call her a “mean girl.” She’s embraced aggression through personal branding repeating phrases like “Mamma Grisly” and “Sara Barracuda.”

Broomfield, know in his later works for including his voice and process, is a saving grace of what have been a purely one-sided portrait. Putting the methodology of making a Sarah Palin documentary from a seemingly neutral position on screen, Broomfield, a Brit, dons a flannel jacket and one of those adorable hats with earflaps and heads to Wasilla, Alaska.

In the context of a book signing Palin repeatedly promises – as captured on a flip camera – to sit down with Broomfield, who has been visiting with Palin’s parents, who open their home to the filmmaker. When he asks if she’ll do an interview, she charms him with a “You Betcha! I sure can!” – but never does. Polarizing a small town (which is more Republican than Democrat), on her way to Governor, she leaves with a $20,000 deficit.

I suppose now is a good time to admit I did not see the half-term governor in Sarah Palin: Undefeated. It never found its way to a movie theater within 120-miles of my base, the conservative-leaning Erie County, NY. But if it had opened locally, you betcha I would have gone.

What is accomplished here is a view of a political figure of relevance, a masterful retail politician. It’s the big details – like foreign policy, she seems to simplify. Broomfield attempts to understand her roots in this small town. He is given a tour and passes by her childhood home (now a thrift store). When his tour guide, a fan of Palin says, “Sarah shops at thrift stores” the cynical Brit asks, “really, I though she shopped at Barneys?”

Broomfield has made an amusing and at times quite funny portrait. He’s attempted to be fair; I think Channel Four is far from the lame-stream media that conservatives continually rail on as being “in the bag for Obama.” He’s not quite in the same camp as Sacha Baron Cohen, but his presence is enjoyable and the film becomes a portrait of Palin’s impact on her hometown. She polarized the town stepping on those that mentored her and by firing anyone she deemed objectionable (later this would play out publically in a case known as “trooper gate”).

In-screen is a portrait of an anti-intellectual with previous aspirations in sports journalism, appealing a crowd based on the belief she’s been anointed by God as a special leader. Palin did herself a disservice to not grant Broomfield 20 minutes – a ballsy and relentless filmmaker, that once put a microphone in the face of notorious hip-hop mogul Suge Knight in a prison yard.

Still, you can’t blame Broomfield for trying. In documenting his process he also documents the greed around this industry that is Palin, Levi Johnston’s handler won’t let him near Broomfield without a large tabloid pay out. Everyone is out to make a buck – you could say even Broomfield. This is an imperfect but engaging film, relevant and bound to incite her fans.

But ask yourself – can someone make a neutral Palin documentary? Probably not. Scholars of documentary will say “there are no neutral documentaries” – I’d point to Jesus Camp, a film with no commentary, some see it and say it’s fair and correct, others see it as a document of child abuse. The fair and balanced Palin doc could not happen without the buy-in of Palin clan. I gather they would never allow the filmmaker final cut. Not while there’s money to be made, like dipping your toe in the presidential race to sell books.